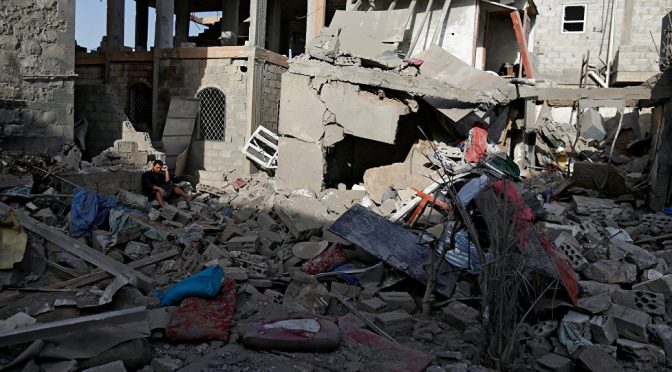 The ongoing de facto genocide in the Republic of Yemen in a war whose most intense phase began in 2015, has until very recently been all but ignored in the Western mainstream media. What has also been ignored is the fundamental casus belli for the US-backed Saudi war, ostensibly against the Shi’ite Houthi by the Sunni Wahhabite Saudis.
As with virtually every war and destabilization since the British first discovered abundant oil in the Persian Gulf over a century ago, the Yemen war is about oil, more precisely about control of oil, lots of oil.
Yemen is a strategically key geopolitical stretch of land at the critical connecting point of the Red Sea which links to the Mediterranean via the Suez Canal and the Indian Ocean. It’s the site of one of the world’s most strategic shipping choke points, the Bab el Mandab, a narrow passage a mere 18 miles distance from Djibouti in the Horn of Africa, making it one of the US Department of Energy’s Oil Transit Chokepoints. According to the US Department of Energy an estimated 4.7 million barrels of oil passes through Bab el Mandab in both directions daily, including oil bound for China.
In March 2015 a new civil war raged in Yemen between the group known popularly as Houthis after Hussein Badreddin al-Houthi, of the Zaidi sect of Islam. The Zaidi area traditionally moderate group who favors equality of women, something anathema to the Saudi Wahhabites. The Zaidi had ruled Yemen for more than 1,000 years until 1962.
The Houthi movement had forced the ouster of Yemeni president Ali Abdullah Saleh in late 2011 on charges of vast corruption. He was succeeded by Abdrabbuh Mansur Hadi, Saleh’s Vice President. At that time both Saleh and Hadi were proxy presidents of Saudi influence.
Things began to change when Hadi refused to step down after his mandate expired. His decision to cut subsidies on fuel prices as well as refusing agreed reforms led to his arrest by the Houthi movement forces in early 2015. He managed later to flee to Saudi Arabia on March 25, 2015 and that same day Saudi Defense Minister Mohammed bin Salman ordered the start of the ongoing bombing war against Yemen and the Houthis.
By the end of 2015 Prince bin Salman and his coalition in the strangely-named Operation Decisive Storm (remember Desert Storm) had inflicted atrocities on the civilian population of Yemen. Within six months of relentless Saudi-led bombing, the UN declared Yemen a “Level Three” emergency, the highest level. Bombings destroyed critical civilian infrastructure, health facilities and the Saudis blockaded urgently needed food, water and medical aid to an estimated 20 million Yemenis, in violation of international law. Some 2,500,000 Yemeni civilians have been displaced. Famine and cholera are rampant. In short, it is genocide.
Cheney Oil Wars
The roots of the ongoing Yemen war with the Saudi-led coalition of Gulf states can be traced back to the Bush-Cheney Administration in the aftermath of September 11, 2001 and declaration of the so-called War on Terror.
The 2003 invasion of Iraq was about oil. Several US officials admitted so at the time including Paul Wolfowitz.

”You’ve got to go where the oil is. I don’t think about it [political volatility] very much,” Cheney told a meeting of Texas oilmen in 1998 when he was still CEO of Halliburton, the world’s largest oil services company.

As Vice President under Bush Jr, Cheney by all indications architected the US military campaigns of Defense Secretary Don Rumsfeld to “take out seven countries in five years,” as General Wesley Clark famously reported it several years later. All those seven are strategic to control of the huge Middle East oil flows to China, to the EU and to the world economy.
In 2004 when the Cheney-Bush “War on Terror” went to Yemen to support then-president Saleh, Saudi domination of Yemen was unquestioned. US and British forces backed Saleh against an uprising by the Houthi minority that began after Saleh tried to arrest Hussein Badreddin al-Houthi, the Zaidi religious leader.
By 2015 that US proxy war changed and the Pentagon and Obama Administration quietly backed a full-scale catastrophic Saudi military assault on Yemen.
What is the US or Saudi interest in Yemen? Control of the oil is the short answer, but perhaps not in the usual sense.
In November 2005 the Republic of Yemen expropriated its oil basins — the Marib Al-Jawf Block — from US Hunt Oil Company and ExxonMobil. That was an irritant but not a decisive game-changer. It was in 2014 when the Houthi rebellion against the President, Saudi-backed Hadi, was victorious that the war took a new form. By March 2015 the Houthi-led Supreme Revolutionary Committee declared a general mobilization to overthrow Hadi, after taking over Sana’a and the Yemeni government and proceeding to Aden.
Undiscovered potential
There are two strategic aspects of who is in control of Yemen, especially the areas now in control of the Houthi. One is the mentioned geostrategic control of oil flows passing Bab el Mandab in the Horn of Africa. The second is the control of the largely untapped oil wealth of Yemen itself.
In 2002 a public report by the US Geological Survey (USGS) concluded that, “When undiscovered potential is added to known reserves, the total petroleum endowment for the MadbiAmran / Qishn TPS rises to 9.8 BBOE, which then ranks Yemen 51st for potential of petroleum resources, exclusive of the US.”
Now, 10 billion barrels of crude oil might not seem huge compared with the Saudi claim to hold proven reserves of 266 billion barrels. Here, however, a CIA report from 1988 becomes interesting. The report, South Yemen’s Oil Resources: The Chimera of Wealth, heavily redacted and declassified, has a cryptic note on potential oil reserves in the large disputed border between Yemen and Saudi Arabia. The CIA points to oil and gas reserves along what during the Cold War was the disputed border Neutral Zone between North Yemen and South Yemen.
The Hunt Oil Company of Texas has been sitting in the Alif Field since 1982 and discovered oil there in 1984. The Alif Field lies in the Houthi-controlled north of Yemen near the undefined border between Saudi Arabia and Yemen. The author had the occasion almost two decades ago during an interview with someone associated with the US Government to discuss notions of peak oil and oil geopolitics. At that point the person in discussion volunteered that the undefined desert lands between Saudi Arabia and Yemen, according to non-published US aerial and geophysical surveys, held oil reserve potential that likely exceeded that of Saudi Arabia.
Whether that statement was accurate is not possible to independently confirm. What is clear is that the space surrounded by the Persian Gulf and the Red Sea, including Yemen and Somalia is one of the most tectonically active areas on our planet, a prerequisite for hydrocarbon discovery. Presence of huge oil and gas reserves in Yemen would explain much about why the Pentagon has actively backed the Saudi brutal effort to retake control of Yemen from the Houthi.
It has little to do with any Shi’ite versus Wahhabite Sunni conflict. Rather it has to do with strategic control of world energy. So long as Saana was in control of a Saudi proxy, whether Saleh or then Hadi, it was a secondary priority for Washington. The oil was “safe,” even if the Yemen government had expropriated the US company oil properties. Once a determined independent Houthi Zaidi force was in control of Yemen or a major part, the threat became serious enough to give the eager new Saudi Defense Minister Prince Mohammed bin Salman the green light to begin the war. That Houthi-controlled Yemen would be potential client for Russian or Chinese oil companies to open up serious exploration of the potentials. That combined with the fact that the Houthi also had friendly relations with Iran clearly set off red lights in the Obama Administration.
Salman not surprisingly claimed it was a war of Iran-led “imperialists” against the forces of Saudi-led “freedom-loving” Sunnis.China now has its first overseas military base across from Yemen in Djibouti, next door to the US whose Camp Lemonnier is the largest American permanent military base in Africa. Former colonial occupier France is also there. There is far more at stake in Yemen than we are being told.
F. William Engdahl is strategic risk consultant and lecturer, he holds a degree in politics from Princeton University and is a best-selling author on oil and geopolitics, exclusively for the online magazine “New Eastern Outlook” where this article was originally published. He is a frequent contributor to Global Research.

One thought on “Yemen Genocide About Oil Control”