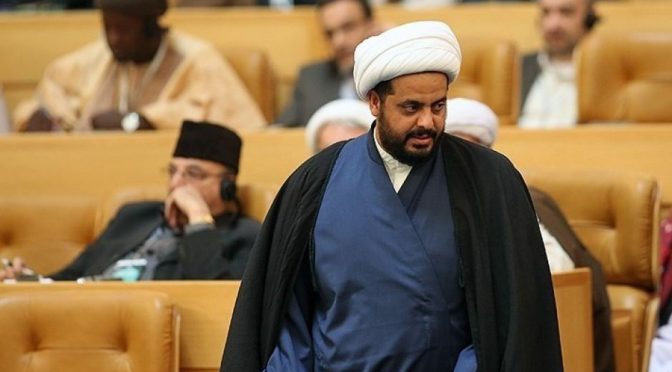 This past week saw US President Donald Trump make a surprise Christmas visit to US troops stationed in Iraq. Only days prior to his visit, the mainstream media were in full-scale attack mode, charging Trump with being “the first President since 2002 not to visit the troops at Christmas.”
by 21stCenturyWire.com
Not long after the news of his visit broke to the press, the US media were awash with a new set of headlines, this time chastising Trump for conducting “campaign activities” because he was signing soldiers’ “Make America Great Again” hats, and a “Trump 2020” patch. However, under the surface a much more profound issue is emerging which no US politician is prepared to confront.

Trump’s Iraq controversy came on the heels of a highly contested White House announcement that the US would be pulling its troops out of northeastern Syria, and drawing down in Afghanistan too. The move was immediately condemned by Neoconservatives and their fellow war hawks in the ‘liberal’ mainstream media. However, the move did resonate with Trump’s support base at home, many of who had initially voted for him on the campaign promise of America’s cessation of “needless overseas wars.”
Amid all of the controversy and media fanfare, one of this issues which still seems to still be off the table for discussion by any US politician (with the exception of Rand Paul) is whether or not the US military occupation of Iraq should still be happening some 15 years after the Second Gulf War commenced in 2003. As with Afghanistan, the US military establishment regard Iraq as a sacred possession – an all but official US protectorate which it is unwilling to relinquish. While the US claim to only have a total of 10,000 servicemen, special forces and contractors currently deployed in Iraq, the reality is that the US still occupies a of the capital city Baghdad in what is still known as the “Green Zone” which houses the largest US overseas embassy with some 12,000 staff working there, along with a number of unofficial bases and installation along the Iraqi region bordering Syria, and a seemingly permanent military presence and airbases embedded in the country’s northern territory of Iraqi Kurdistan.
The current political climate in Iraq demonstrates a waning desire for the US to continue overruling Iraqi national interests; its domestic politics, its foreign relations – especially with regards to Iran, and also its security operations vis-à-vis fighting terrorist organizations like ISIS. The US still will not allow Iraq to finish the job it began in the summer of 2014 of flushing out ISIS once and for all. The political situation with regards to the US presence in the country will soon reach a critical stage.
Antiwar.com reports…
President Trump’s surprise visit to Iraq has brought the issue of a continued, long-term US military presence in the country back into focus, and Iraqi MPs have rallied in an unusual show of unity against the US troops.
MPs from both ruling and opposition blocs in parliament are united in calls for an extraordinary session to debate the matter, saying that the question of US violations of Iraqi sovereignty must be answered.
While a lot of the immediate backlash seems to be related to Trump cancelling his visit with the Iraqi PM over a disagreement on location, the ruling bloc and its leader Moqtada al-Sadr have long spoken out about the need for Iraq to get out from under the domination of foreign powers and seek a more independent future.
Qais Khazali, the head of the power Asaib Ahl al-Haq militia, expressed confidence that parliament would vote to expel US forces from Iraq. Failing that, he warned, the militias would force them out “by other means.”
Source: 21st Century Wire Iraq Files