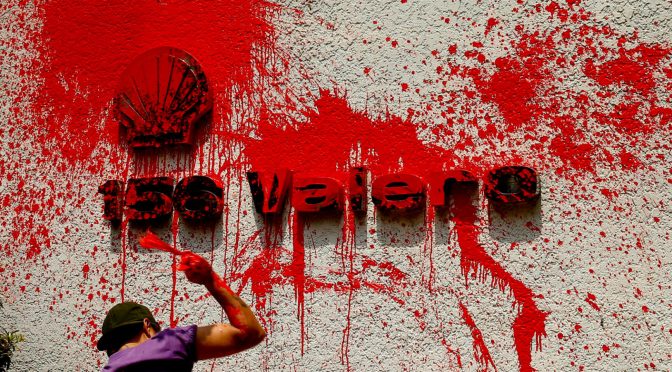 Regime changes in Iraq and Libya, Syria’s war, Venezuela’s crisis, sanctions on Cuba, Iran, Russia, and North Korea are all reflections of a new global imperialism imposed by a core of capitalist nations in support of trillions of dollars of concentrated investment wealth. This new world order of mass capital has become a totalitarian empire of inequality and repression.

The global 1%, comprised of over 36-million millionaires and 2,400 billionaires, employ their excess capital with investment management firms like BlackRock and J.P Morgan Chase. The top seventeen of these trillion-dollar investment management firms controlled $41.1 trillion dollars in 2017. These firms are all directly invested in each other and managed by only 199 people who decide how and where global capital will be invested. Their biggest problem is they have more capital than there are safe investment opportunities, which leads to risky speculative investments, increased war spending, privatization of the public domain, and pressures to open new capital investment opportunities through political regime changes.

Power elites in support of capital investment are collectively embedded in a system of mandatory growth. Failure for capital to achieve continuing expansion leads to economic stagnation, which can result in depression, bank failures, currency collapses, and mass unemployment. Capitalism is an economic system that inevitably adjusts itself via contractions, recessions, and depressions. Power elites are entrapped in a web of enforced growth that requires ongoing global management and the formation of new and ever-expanding capital investment opportunities. This forced expansion becomes a worldwide manifest destiny that seeks total capital domination in all regions of the earth and beyond.

Sixty percent of the core 199 global power elite managers are from the US, with people from twenty capitalist nations rounding out the balance. These power elite managers and associated one percenters take an active part in global policy groups and governments. They serve as advisors to the IMF, World Trade Organization, World Bank, International Bank of Settlements, Federal Reserve Board, G-7 and the G-20. Most attend the World Economic Forum. Global power elites engage actively on private international policy councils such as the Council of Thirty, Trilateral Commission, and the Atlantic Council. Many of the US global elites are members of the Council on Foreign Relations and the Business Roundtable in the US. The most important issue for these power elites is protecting capital investment, insuring debt collection, and building opportunities for further returns.

The global power elite are aware of their existence as a numerical minority in the vast sea of impoverished humanity. Roughly 80% of the world’s population lives on less than ten dollars a day and half live on less than three dollars a day. Concentrated global capital becomes the binding institutional alignment that brings transnational capitalists into a centralized global imperialism facilitated by world economic/trade institutions and protected by the US/NATO military empire. This concentration of wealth leads to a crisis of humanity, whereby poverty, war, starvation, mass alienation, media propaganda, and environmental devastation have reached levels that threaten humanity’s future.

The idea of independent self-ruling nation-states has long been held sacrosanct in traditional liberal capitalist economies. However, globalization has placed a new set of demands on capitalism that requires transnational mechanisms to support continued capital growth that is increasingly beyond the boundaries of individual states. The financial crisis of 2008 was an acknowledgment of the global system of capital under threat. These threats encourage the abandonment of nation-state rights altogether and the formation of a global imperialism that reflects new world order requirements for protecting transnational capital.

Institutions within capitalist countries including government ministries, defense forces, intelligence agencies, judiciary, universities and representative bodies, recognize to varying degrees that the overriding demands of transnational capital spill beyond the boundaries of nation-states.  The resulting worldwide reach motivates a new form of global imperialism that is evident by coalitions of core capitalist nations engaged in past and present regime change efforts via sanctions, covert actions, co-options, and war with non-cooperating nations—Iran, Iraq, Syria, Libya, Venezuela, Cuba, North Korea and Russia.

The attempted coup in Venezuela shows the alignment of transnational capital-supporting states in recognizing the elite forces that oppose Maduro’s socialist presidency. A new global imperialism is at work here, whereby Venezuela’s sovereignty is openly undermined by a capital imperial world order that seeks not just control of Venezuela’s oil, but a full opportunity for widespread investments through a new regime.

The widespread corporate media negation of the democratically elected president of Venezuela demonstrates that these media are owned and controlled by ideologists for the global power elite. Corporate media today is highly concentrated and fully international. Their primary goal is the promotion of product sales and pro-capitalist propaganda through the psychological control of human desires, emotions, beliefs, fears, and values. Corporate media does this by manipulating feelings and cognitions of human beings worldwide, and by promoting entertainment as a distraction to global inequality.

Recognizing global imperialism as a manifestation of concentrated wealth, managed by a few hundred people, is of utmost importance for democratic humanitarian activists.  We must stand on the Universal Declaration of Human Rights and challenge global imperialism and its fascist governments, media propaganda, and empire armies.

Peter Phillips is a professor of political sociology at Sonoma State University. Giants: The Global Power Elite, 2018,  is his 18th book from Seven Stories Press. He teaches courses in Political Sociology, Sociology of Power, Sociology of Media, Sociology of Conspiracies and Investigative Sociology. He served as director of Project Censored from 1996 to 2010 and as president of Media Freedom Foundation from 2003 to 2017.

Top Photo | A protester splashes red paint at the logo of Shell, one of the three big oil companies in the Philippines, to denounce an increase for the eighth consecutive week, Oct. 5, 2018 in Makati, Philippines. Bullit Marquez | AP