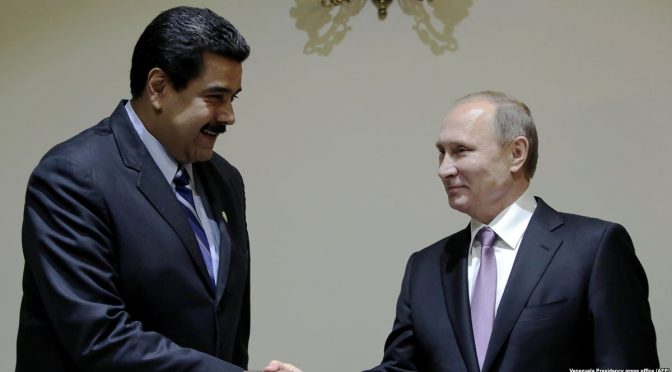 At a high-level meeting in Rome this week, it seems that Russia reiterated a grave warning to the US – Moscow will not tolerate American military intervention to topple the Venezuelan government with whom it is allied.

Meanwhile, back in Washington DC, President Donald Trump was again bragging that the military option was still on the table, in his press conference with Brazilian counterpart Jair Bolsonaro. Trump is bluffing or not yet up to speed with being apprised of Russia’s red line.

The meeting in the Italian capital between US “special envoy” on Venezuelan affairs Elliot Abrams and Russia’s deputy foreign minister Sergei Ryabkov had an air of urgency in its arrangement. The US State Department announced the tête-à-tête only three days beforehand. The two officials also reportedly held their two-hour discussions in a Rome hotel, a venue indicating ad hoc arrangement.

Abrams is no ordinary diplomat. He is a regime-change specialist with a criminal record for sponsoring terrorist operations, specifically the infamous Iran-Contra affair to destabilize Nicaragua during the 1980s. His appointment by President Trump to the “Venezuela file” only underscores the serious intent in Washington for regime change in Caracas. Whether it gets away with that intent is another matter.

Moscow’s interlocutor, Sergei Ryabkov, is known to not mince his words, having earlier castigated Washington for seeking global military domination. He calls a spade a spade, and presumably a criminal a criminal.

The encounter in Rome this week was described as “frank” and “serious” – which is diplomatic code for a blazing exchange. The timing comes at a high-stakes moment, after Venezuela having been thrown into chaos last week from civilian power blackouts that many observers, including the Kremlin, blame on American cyber sabotage. The power grid outage followed a failed attempt by Washington to stage a provocation with the Venezuelan military over humanitarian aid deliveries last month from neighboring Colombia.

The fact that Washington’s efforts to overthrow the elected President Nicolas Maduro have so far floundered, might suggest that the Americans are intensifying their campaign to destabilize the country, with the objective of installing US-backed opposition figure Juan Guaido. He declared himself “acting president” in January with Washington’s imprimatur.

Given that the nationwide power blackouts seem to have failed in fomenting a revolt by the civilian population or the military against Maduro, the next option tempting Washington could be the military one.

It seems significant that Washington has recently evacuated its last remaining diplomats from the South American country. US Secretary of State Mike Pompeo commented on the evacuation by saying that having US personnel on the ground “was limiting” Washington’s scope for action. Also, American Airlines reportedly cancelled all its services to Venezuela in the past week. Again, suggesting that the US was considering a military intervention, either directly with its troops or covertly by weaponizing local proxies. The latter certainly falls under Abrams’ purview.

After the Rome meeting, Ryabkov said bluntly: “We assume that Washington treats our priorities seriously, our approach and warnings.”

One of those warnings delivered by Ryabkov is understood to have been that no American military intervention in Venezuela will be tolerated by Moscow.

For his part, Abrams sounded as if he had emerged from the meeting after having been given a severe reprimand. “No, we did not come to a meeting of minds, but I think the talks were positive in the sense that both sides emerged with a better understanding of the other’s views,” he told reporters.

“A better understanding of the other’s views,” means that the American side was given a red line to back off.

The arrogance of the Americans is staggering. Abrams seems, according to US reporting, to have flown to Rome with the expectation of working out with Ryabkov a “transition” or “compromise” on who gets the “title of president” of Venezuela.

That’s what he no doubt meant when he said after the meeting “there was not a meeting of minds”, but rather he got “a better understanding” of Russia’s position.

Washington’s gambit is a replay of Syria. During the eight-year war in that country, the US continually proffered the demand of a “political transition” which at the end would see President Bashar al Assad standing down. By contrast, Russia’s unflinching position on Syria has always been that it’s not up to any external power to decide Syria’s politics. It is a sovereign matter for the Syrian people to determine independently.

Nearly three years after Russia intervened militarily in Syria to salvage the Arab country from a US-backed covert war for regime change, the American side has manifestly given up on its erstwhile imperious demands for “political transition”. The principle of Syrian sovereignty has prevailed, in large part because of Russia’s trenchant defense of its Arab ally.

Likewise, Washington, in its incorrigible arrogance, is getting another lesson from Russia – this time in its own presumed “back yard” of Latin America.

It’s not a question of Russia being inveigled by Washington’s regime-change schemers about who should be president of Venezuela and “how we can manage a transition”. Moscow has reiterated countless times that the legitimate president of Venezuela is Nicolas Maduro whom the people voted for last year by an overwhelming majority in a free and fair election – albeit boycotted by the US-orchestrated opposition.

The framework Washington is attempting to set up of choosing between their desired “interim president” and incumbent Maduro is an entirely spurious one. It is not even worthy to be discussed because it is a gross violation of Venezuela’s sovereignty. Who is Washington to even dare try to impose its false choice?

On Venezuela, Russia is having to remind the criminal American rulers – again – about international law and respect for national sovereignty, as Moscow earlier did with regard to Syria.

And in case Washington gets into a huff and tries the military option, Moscow this week told regime-change henchman Abrams that that’s a red line. If Washington has any sense of rationale left, it will know from its Syria fiasco that Russia has Venezuela’s back covered.

Now, the desperate Americans could still try more sabotage, cyber or financial. But their options are limited, contrary to what Trump thinks.

How the days of American imperialist swagger are numbered. There was a time when it could rampage all over Latin America. Not any more, evidently. Thanks in part to Russia’s global standing and military power.

One thought on “Russia Gives US Red Line on Venezuela”