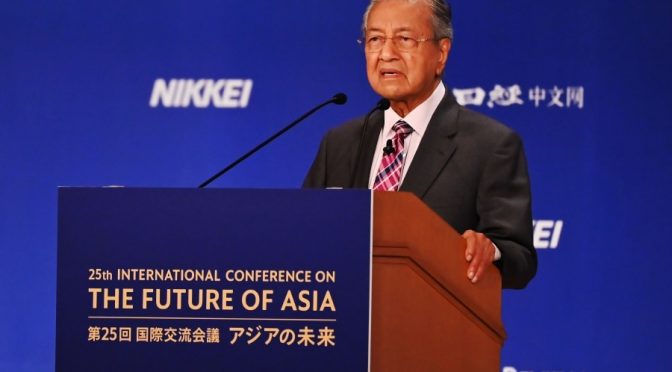 The highly coordinated move towards geopolitical multipolarity and economic prosperity continue to push ahead as planned, in spite of the perpetual warmongering of the Deep State Department and NATO Alliance.

Legitimate concerns raised against the issue of replacing one hegemony over another were also addressed in the recently concluded Nikkei Future of Asian Forum in Japan, last week.

Philippine President Rodrigo Duterte questioned the morality of one country taking ownership of an entire ocean, referring of course to the vast South China Sea under the Chinese 9-dash line claim.


Meanwhile, Canada has finally complied with the request of the Philippine government to pull its tons of garbage out from the Port of Manila.

Malaysia is also requesting Canada to do the same from their port.

Asian countries are now up in arms as the West peddles the climate change hoax to project its genuine concerns for the environment, while dumping toxic household, hospital and industrial wastes on the “Third World.”

“Malaysia will not be a dumping ground to the world… we will fight back. Even though we are a small country, we can’t be bullied by developed countries,” Yeo said, as cited by the AP.

ASEAN Prefers Gold as the Common Currency of Trade

Economist Prime Minister of Malaysia Mahathir Mohammad expressed his preference for gold as the common currency between East Asian countries, as opposed to the promotion of sovereign currencies like the Yen, Renminbi, etc., in the Asian Summit forum held in Japan last week.


The gold buying frenzy started when the Eastern Alliance decided it is one of the ways to bring down the criminal cabal without firing a single missile.

Last Wednesday the Central Bank of the Philippines announced that a law has been passed exempting gold sales by small-scale miners to the bank from excise duties and income taxes. The move was explained as a way to boost the country’s foreign exchange reserves and to prevent smuggling.

According to Reuters, small miners have found a way to circumvent taxes introduced back in 2011 by selling gold on the black market. The law entitles them to sell all produced gold to the country’s central bank at world market prices. The Philippines’ gold reserves remained unchanged at roughly 198 tons in both the first quarter of 2019 and the fourth quarter of 2018. Gold accounted for nearly ten percent of the country’s gross international reserves of $83.96 billion at the end of April.

Countries across the globe have been stockpiling bullion in an attempt to diversify their foreign reserves away from the US dollar.

Of course, the real figures for the gold that the Philippines actually have in its vault and in most banks around the world are far higher. Some of it is already being used in the ongoing Build Build Build infrastructure program in the form of Japanese and Chinese development loans.

It should be clear by now that the huge revaluation rates of some currencies may never happen at all considering that it is so easy for the Deep State to play around with it.

This is very evident with the sudden rise again of the cryptocurrency Bitcoin, in response to the US-China trade war.

The Petrodollar has become a commodity onto itself, itself of being a tool for the efficient exchange of goods and services. Cryptocurrencies are following on the same path.

For a cryptocurrency to be a reliable tool for trade, it must be pegged to the real value of tangible fixed asset like gold, and only allowed to increase in number of units, so that more people could use it conveniently , instead of per unit appreciation or devaluation that also forces us to read the numbers inconveniently past the right of the decimal point.

Gold and silver, of course, are tangible commodities by themselves as they are preferably used in today’s fastest chips and microprocessors.

How Should the West Deals with China as #1?

Raising concerns over the unprecedented speed at which China achieves its meteoric economic rise of China is not entirely unexpected. Only a few of the present generation know a bit about the Chinese civilization, and the fact that the Chinese people have been there before, a long time ago.

Kishore Mahbubani, Dean and Professor in the Practice of Public Policy at the National University of Singapore, discussed the history of China’s rise, and how the United States’ current behavior will influence the future actions of China.


What this all means is that the advancing paradigm of multipolarity is not a fixed rigid post that is totally immune from constant change itself. It will just provide the necessary transition towards what could be the most ideal setup that will finally unleash the responsible utilization of the scientific achievements, i.e. suppressed technologies, of the day.

That is why it pays a lot to learn and realize why empires eventually collapsed and how to avoid it.


Individual freedom cannot be given away for those who doesn’t even have the slightest idea of what it truly is. But it is the natural consequence of exerting due efforts to become aware and be skilled in the art of what makes one truly free.