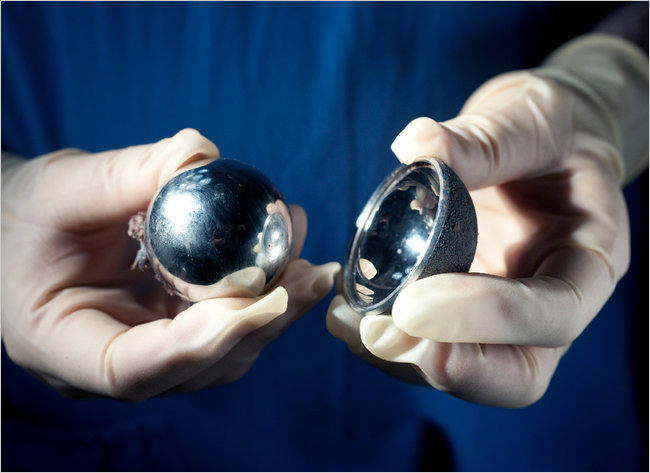 One of the most troubled orthopedic implants of the past decade, this artificial hip — known as the A.S.R., or Articular Surface Replacement — was originally promoted as a breakthrough in design that would last longer and provide patients more natural movement.

But many patients soon developed inexplicable pain, and surgeons, when replacing the implant, discovered mysterious masses of dead tissue near the thighs of some patients.

Until late summer, officials at the Johnson & Johnson unit, DePuy Orthopaedics, the largest maker of replacement hips worldwide, maintained that the A.S.R. was performing on a par with competing devices. But interviews with doctors indicate that DePuy received repeated warnings that the implant was failing and that surgeons were abandoning it.

The brief and troubled life of DePuy’s A.S.R. hip points to a medical implant system that is piecemeal and broken on many fronts, critics say. Unlike new drugs, many of which go through a series of clinical trials before receiving approval from the Food and Drug Administration, critical implants can be sold without such testing if a device, like an artificial hip, resembles an implant already approved and used on patients.

That way, manufacturers can rapidly make small changes to a device to improve it. But those simpler procedures have also effectively created a loophole, experts say, that lets producers bundle a component from an unapproved implant into an existing design and sell a device with minimal testing. With the A.S.R., that process unfolded with devastating results.

Another invasive procedure which is very traumatic to every women is breast cancer surgery. Their solution is almost always breast removal. The earlier the better. And a lot of those who undergo this procedure continue to experience the same ailment, hence the next recommended solution – chemotherapy. The problem with chemotherapy is that 70% of US doctors don’t want to undergo the same chemotherapy if in case they themselves will have cancer in the future.

Again the question would be, is there a better alternative to these invasive mechanical procedures?