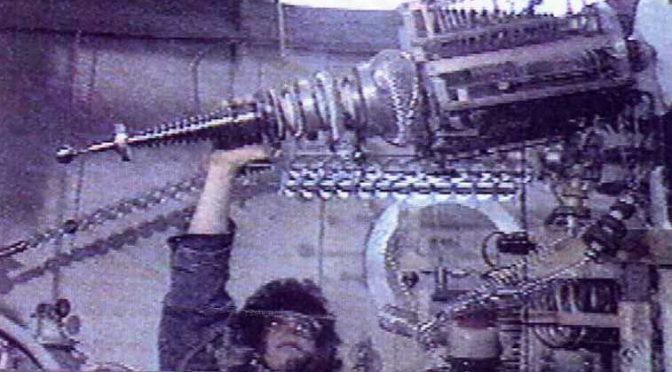 Basically, the idea is to broadcast an electromagnetic signal at a certain frequency (see instruction below) to neutralize the radiation itself. Everything in our world, including you and I, is propagating in space at certain frequency or set of frequencies which determine form. (Please watch the Youtube video below to understand the relationship between frequency and form). If this radiation frequency is “knocked” upon by a more powerful energy at the same frequency it would then be rendered “neutralized”. The cancellation or neutralization of radiation occurs when there is a 180-degree phase difference between incoming radiation “signal” and your outgoing audio/radio broadcast signal, both of which are of the same frequency. When we are shielded with this signal, we are therefore protected from incoming radiation.

You don’t have to know and produce the exact frequency required. Hutchison is broadcasting it right now. You only have to tune in your ham radio to his broadcast, and then retransmit it so:

Of course, this same technology can also be used to stop the meltdown itself. But until that opportunity will come, we should do what is necessary from our end. Also read The Nuclear Debate for a discussion on a “radiation-free” nuclear technology.

Please, relay this to everyone you know, through all forms of social media. The time to act is NOW.

I received the following email from John Hutchison and Nancy Lazaryan.

Apparently they think that a network Ham Radio, CB radio and Tesla Coil operators could form a protective barrier, not just in the U.S., but worldwide, even in Japan, from the radiation that is spewing from the damaged reactors.

The email describes a method that is relatively simple. This is far outside my area of expertise, but Hutchison does have a track record of being able to accomplish some very unusual effects via frequencies. We have published his documentation about clearing regions of Gulf waters nearly back to a pristine state using radio and audio frequencies.

To all everyone with a Ham Radio, CB radio or Tesla Coil…
and if you don’t have one of these, get a piece of REBAR and put it in your yard…
this pass the email to everyone you know!!!!

John Hutchison has been in the Gulf of Mexico using certain audio and radio frequencies to RESET the polluted waters.THE SAME SCIENCE can be used to try to PROTECT the Earth from the radiation being released in Japan.

Hutchison is transmitting RIGHT NOW.
People need to pick up the signal and “bounce” it to attempt to create a SHIELD.

HAM RADIO OPERATORS
TUNE INTO the
ULF bands at 16 kilohertz
VLF bands at 19 kilohertz to 400 kilohertz and then into the
HF bands at 4 megahertz starting at 2 mhz to 18 mhz then at up to 27 mhz
there will be lots of side carriers
You should hear something SIMILAR to this (this is not the exact audio, but close)… [youtube=http://www.youtube.com/watch?v=d-ubCyxDRXo]

The RF effects are also in the X band region, the regions of the solar flux index and hydrogen bands these are 21 to 24 centimeters broad banded

The frequencies can also be received by RF MODULATED LASERS and TESLA COILS Tesla coils will do a lot on their own, plug them in and they will receive and transmit and if any folks have IMPULSE GENERATORS or RF GENERATORS feed the signal into them and fire them off.

Ham Radio Operators
use phase shifting and other devices to get the frequencies out.

CB Radio Operators
If you can pick up the signal from John Hutchison, rebroadcast it. Do a CB SKIP.

We are working with sky waves, ground waves and interactions with a larger prime mover like the ionosphere, solar and geomagnetic fields and propagation. THIS IS SAFE!!!

EVERYONE ELSE
We used REBAR as antennas to capture the RF frequencies. This worked in cleaning the ground around the rebar. GET rebar and put in the ground.

Along with this use your mind for healing the earth and helping Japan. This is called psychotronics. All the above information and psychotronics are accepted sciences in the military industrial complex as well as noetic science teams.

Question: Using rebar to capture RF frequencies? How long a piece and how much is driven into the ground? What diameter rebar could be used? How many rebars would one use? Would one use 4, one for each direction?

Here are the facts re garding the validity of this technology:

We have also verified Hutchison’s work to be very effective. If you still don’t understand any of these, please ask any electronic technicians near you.

One thought on “You Can Defeat Nuclear Radiation Now!”