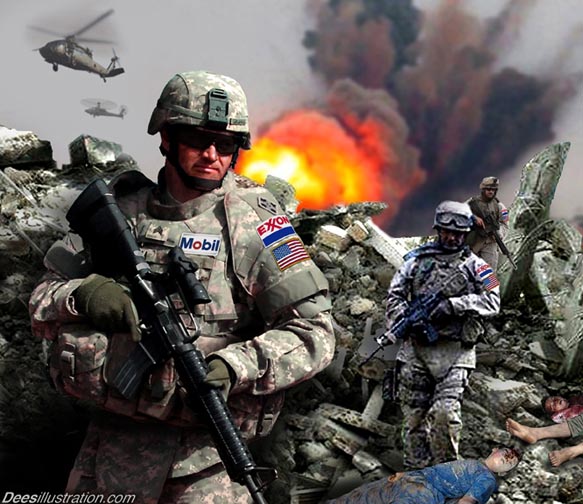 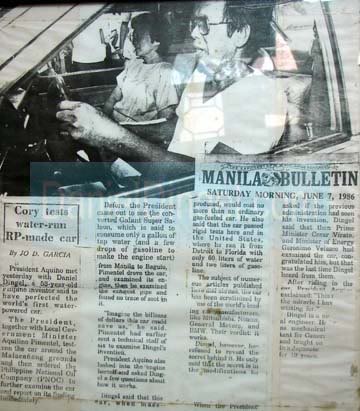 Waterfuel Technology has been around for at least 50 years. But oil corporations and bankers successfully suppressed this technology thru patent buyout, ridicule, harassment and murder. Even the academic institutions are complicit to this heinous crime against civilization and the destruction of Nature herself, by excluding or maligning this science, effectively suppressing the spread of knowledge about one of the most important achievements of mankind.

One of those who successfully perfected the method of fracturing water molecule into its component atoms, i.e. hydrogen and oxygen, “on demand” and literally, run cars on water is our very own, Engr. Daniel Dingel, who discovered this technology in 1969. Marcos then denied any government support for the inventor and instead built a Nuclear Plant to please Western Powers. The same Nuclear Plant was moothballed just before it is switched on by the “revolutionary” government of Cory Aquino in 1986.

To its credit though, the Aquino Government had shown keen interest on said waterfuel technology. In fact no less than Cory took a test drive, with the inventor himself, on the actual car that runs on nothing else but water, as shown on a newspaper clipping on the right…

Sadly, Cory succumbed to the pressure of the Central Bank not to provide any assistance for its mass production – another proof that private bankers and corporations are the real power behind every elected official, not the electorate.

And to prove their point, they removed President Estrada from office days after signing a memo that would in effect carry out the first bold steps in implementing this homegrown waterfuel technology.

Today, we are still paying billions for the loan used in building said nuclear plant which the Oil Cartel and the Dark Cabal don’t want us to benefit from. And today, we have another Aquino at the helm. Whether this one has the balls to do the right thing remains to be seen. But you don’t have to wait for your government to be able to convert your car to run on water now…

Today, May 4th at 10pm EST, a Mister X will announce to the world how he runs his truck on water. Watch the clip below…

As Mr. X (Freddy) started discussing his technology, it sounded as though version six of his cell has been improved and will be open sourced. Version seven is a whole different setup, and most likely will not be open sourced. He claimed the technology has all has to do with sound. It uses ultrasonic frequencies. Basically, he indicated you have to oscillate the outer tubes of the cell with sound. They have mastered the technology, and now have designed even more powerful systems.

Mister X will also discuss how similar technology can power a house completely off the grid. He has given me permission to release the information in this article for now until he can talk directly to the people next Wednesday with many exciting developments.

The system Mister X will release to the world lets you fill up your tank with 98% water and 2% fuel. He says the fuel is only used to keep moisture from hurting some of the components that were not designed to be exposed to water all the time. Filling up with just 2% fuel keeps the system from being corroded by water. Eventually it will be 100% water powered as components in engines and fuel systems are changed out to not degrade being exposed to water.

Mister X says we haven’t needed oil for many decades now and what he’s done has actually been done many times before. But every other time, the inventors either got bought out or were killed! In fact, Mister X has had 10 attempts on his life but credits God for protecting him each time. Mister X reports that the last attempt was a bioweapon that he was able to defeat using a product called MMS that I cover extensively in my booklet, “Suppressed Health Secrets” that you can find in the “Natural Cures” area of www.project.nsearch.com

Mister X was even offered $1 billion in cash from an oil producing country to walk away from this invention! But through his strong belief that God wants him to release this technology to the people he refused to sell out and made sure that this time the technology would not be suppressed in any way.

I’ve been personally interested in researching various cars that ran on water but later disappeared. I recently met a shop owner that reported how he met an inventor that lived near Gainesville Florida about 14 years ago. This inventor also had a car running on water. This shop owner saw the vehicle and met the man in his store. The inventor had just sold the technology to Ford Motor Company and of course we never heard of it again! Clearly the car companies have been in bed with the oil companies all along and have been key in the suppression of this important technology. Ford Motor company shelving the technology they bought to run cars on water proves this point.

Here’s the reality. We don’t need to go to war anymore over oil. We don’t need to destroy our Gulf of Mexico beaches with oil. We don’t need to have high food prices because of high gasoline prices. With essentially free fuel comes basically free transportation of goods and people which will inject trillions into the world economy. We will experience the biggest economic boom in all history as vehicles are converted to run on water!

This is all I can report at this time. All I can tell you is to pray for the safety of Mister X. He has told me that even if they killed him now, he’s put the information on how to do this in so many hands that it cannot be stopped anymore. He was very insistent that he had his bases covered and this technology would be released no matter what happened to him.

Once again, Mister X and his incredible technology that allows you to run your car or truck on water will be revealed in a world exclusive interview on Wednesday, May 4th at 10pm EST (USA) on the “Late Night in the Midlands” radio show that you can hear live on the streaming players at http:// www.project.nsearch.com and http://www.latenightinthemidlands.com Tell everybody you know so we can make this information go viral around the world.

Let’s make sure to give Mister X a big welcome on “Late Night in the Midlands” and remember 2011 as the year when the lies about oil came tumbling down! We don’t need oil anymore! Pass the word!

Links mentioned during the discussion: