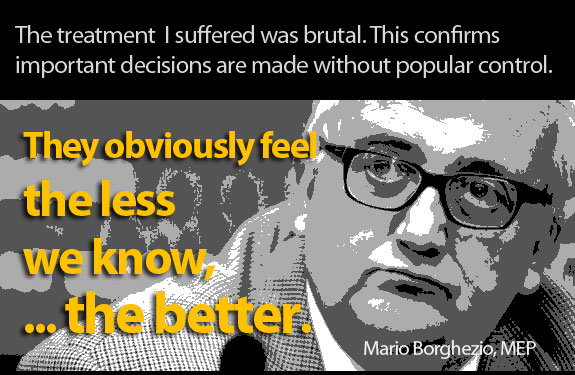 The Bilderberg Meeting is the most prestigious of all leadership gatherings on this planet, yet you won’t see it on TV. Here’s why.

The person who actually got this organization started was himself – this is Prince Bernhard of the Netherlands – a former SS officer.

We had been warned…

If you realy want to know how this group came about, here’s a very comprehensive history of and who are the ultimate beneficiaries behind this secretive and sinister globalists that made this planet a living hell.

The Bilderberg Group of some 100 political and economic leaders, as well as aristocrats, will meet from Thursday in the chic Swiss ski station of St Moritz.

The exact location and date of the meeting has been shrouded in mystery. A spokesman from the Graubunden canton told AFP that it will take place at the mountain resort, but would not give details on the location, date and participants. more

Borghezio, of right-wing Italian party Lega Nord, was reportedly with another Italian as he attempted to infiltrate the luxury Suvretta House hotel where the conference is taking place.

Borghezio was blocked by guards from the security firm Securitas, who then called in the Swiss police. After having their identities checked, the two Italians were told they could not enter the building.

But according to the Italian news agency ANSA, Borghezio’s nose was bloodied during the altercation with the security guards. He told the agency he intends to press charges. more

Thanks to the fantastic work of Bilderberg activists, journalists and the Swiss media, we have now been able to obtain the full official list of 2011 Bilderberg attendees. Routinely, some members request that their names be kept off the roster so there will be additional Bilderbergers in attendance.

“In addition to these pragmatic goals, the powers of financial capitalism had
another far-reaching aim, nothing less than to create a world system of
financial control in private hands able to dominate the political system of
each country and the economy of the world as a whole. This system was to be
controlled in a feudalist fashion by the central banks of the world acting
in concert, by secret agreements arrived at in frequent private meetings and
conferences. The apex of the system was to be the Bank for International
Settlements in Basle, Switzerland, a private bank owned and controlled by
the world’s central banks which were themselves private corporations.”

“The technotronic era involves the gradual appearance of a more controlled society. Such a society would be dominated by an elite, unrestrained by traditional values. Soon it will be possible to assert almost continuous surveillance over every citizen and maintain up-to-date complete files containing even the most personal information about the citizen. These files will be subject to instantaneous retrieval by the authorities.”

Is there something we can do?

This group think there is…