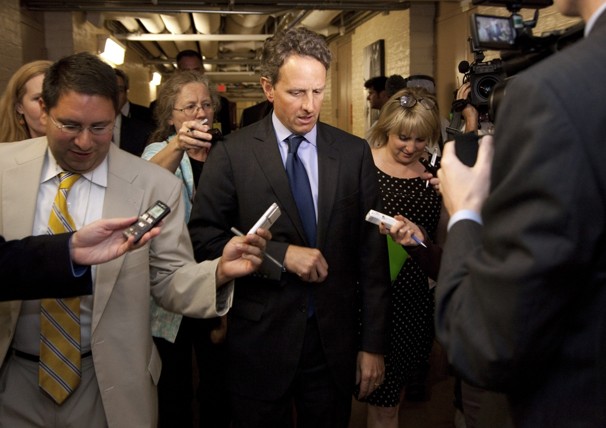 Dominique Strauss-Kahn, the former head of the International Monetary Fund, has been released from house arrest in the sexual assault case against him.

The French politician appeared briefly in a New York courtroom on Friday after reports that prosecutors had grave doubts about the credibility of Strauss-Kahn’s accuser.

The judge stressed that the move does not mean that the “case is over” and prosecutors did not agree to dismiss the sexual assault case against Strauss-Kahn.

Strauss-Kahn was arrested in May, accused of trying to rape a hotel maid, and has been confined to a Manhattan apartment.

The 32-year-old hotel maid accused Strauss-Kahn of chasing her through his luxury suite in New York, trying to pull down her pantyhose and forcing her to perform oral sex.

He denies the allegations, saying the relationship was consensual.

His passport remained surrendered, and he will not yet be allowed to leave the country. However, one of his attorneys, Benjamin Brafman, said Strauss-Kahn would be free to travel within the US.

“It is a great relief, another of Strauss-Kahn’s attorneys, William Taylor, said, adding that the case underscores “how easy it is for people to be charged with serious crimes and for there to be a rush to judgement.”

“It is so important in this country that people, especially the media, refrain from judgement until the facts are all in,” he said.

Treasury Secretary Timothy F. Geithner, an architect of the Obama administration’s economic strategy, has told the president that he may seek as soon as this summer to resign, according to people familiar with the matter.Geithner’s departure would mark the loss of Obama’s longest-serving economic adviser at a time when the recovery has slowed and the unemployment rate remains stubbornly high.

Geithner has told the White House he will wait until the conclusion of talks with Congress over the nation’s debt before deciding whether to leave, according to the people familiar with the matter.

An administration official said Geithner recognizes the conclusion of these negotiations could provide a “window” for him to leave. Another official at the Treasury Department said Geithner doesn’t plan to make any decisions while he is focused on striking a deal with lawmakers to reduce the deficit and raise the federal limit on borrowing, which he has said must happen by Aug. 2 to avert a catastrophic default.

NEW YORK — A law enforcement official tells The Associated Press that the accuser in the New York City sex assault case against a former International Monetary Fund leader has lied about circumstances surrounding the alleged attack.

The official also says prosecutors also believe Dominique Strauss-Kahn’s accuser has lied about her background. The official is speaking on condition of anonymity to discuss details not yet made public in court.

The official says prosecutors believe the hotel housekeeper lied about various details on her application for asylum in the U.S., including a claim that she had been raped in her native Guinea.

The official says prosecutors also believe she lied about some of her activities in the hours surrounding the alleged attack, but they haven’t necessarily questioned her account about the incident itself.

Former IMF Chief Held Hostage by the US Government

You can put off paying your debts only so long. Eventually you’ll have to pay the piper.

By now, everyone knows that Dominique Strauss-Kahn, the head of the IMF, was hauled off an Air France flight two minutes before it was due to take off, and taken into custody by the NYPD. Why? The US cover story is that he allegedly forced or attempted to force a maid at the Sofitel hotel in Manhattan to perform oral sex on him. The real story behind his detainment has to do with the US economy – the bankruptcy of the United States of America.

Could over 1 million bars of gold, much of which is still held in Fort Knox, Ky., be counterfeit? An October 2009 discovery that suggests this may be true has been suppressed by the mainstream media but has been circulating among the “big money” brokers and financial kingpins. It is just now being revealed to the public.

Gold is regularly exchanged between countries to pay debts and to settle the so-called balance of trade. It is often also used as a hedge against a falling currency. Gold is regularly traded and stored in vaults under the strict supervision of a special organization based in London, known as the London Bullion Market Association (LBMA). That’s why news of counterfeit gold bars was a surprise to many experts.

In October 2009, China reportedly received a large shipment of gold, containing some 6,000 bars, weighing 400 ounces each. When it was received, the Chinese government asked that tests be performed to guarantee the purity and weight of the gold bars. In this test, four small holes were drilled into the bars, and the metal was analyzed. Officials were shocked to find the bars were bogus. They contained cores of tungsten, with only an outer coating of real gold. What’s more, these gold bars, containing serial numbers for tracking, originated in the United States and had reportedly been stored in Fort Knox for years.

Congressman Ron Paul, the Republican presidential candidate who is chairman of the U.S. House Financial Services subcommittee and chairs the House’s Subcommittee on Domestic Monetary Policy plans to question U.S. Treasury officials next Thursday (June 23) about the U.S. gold reserves and get them to testify regarding the authenticity of the nation’s gold reserves.

This is an important question given the increasingly precarious state of the U.S.’ finances and is important to the gold market as the unaudited U.S. gold reserves are the largest holdings of gold bullion in the world z

One thought on “US Blackmail vs. ex-IMF Chief Straus Kahn Collapsing; Geithner Resigning; US Defaulting by August 2”