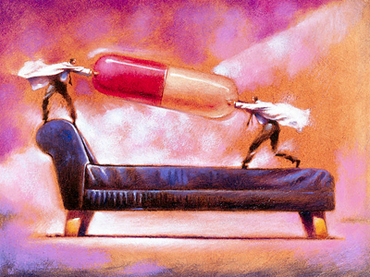 There are reasons why we lost trust & respect for the Men in White Robes. And it’s more than what you think. They play with the system of greed which involve the spread of addiction, disease and the gradual killing of people around the world in the grander scheme of depopulation reduction. Whether they are doing it consciously or otherwise, does not in any absolve them. Those few who saw the barbarity, whom we greatly admired and forever grateful, are mere “exceptions to the rule”.

Medical studies published in VOL 169 (NO. 22), DEC 14/28, 2009 edition of the Archives of Internal Medicine have found that radiation from just one computed tomographic (CT) scan actually causes cancer decades after patient exposure.  CT scans are used to diagnose various medical conditions, including heart blockages, colon cancer, brain tumours and pneumonia. The research shows that the risk of developing cancer increases with just one CT scan.  CT scans blasts X-radiation in a test that allows doctors to see a three-dimensional image of a targeted organ or tissue.

World Health Organization responsible for infecting the World with AIDS

The use of live vaccines by the WHO for smallpox activated a dormant infection called HIV.

On May 11, 1987, The London Times, one of the world’s most respected newspapers, published an explosive article entitled, “Smallpox vaccine triggered AIDS virus.”  The story revealed that the smallpox eradication vaccine program sponsored by the WHO (World Health Organization) was responsible for unleashing AIDS in Africa. Almost 100 million Africans living in central Africa were vaccinated by the WHO (World Health Organization). The vaccine was responsible for awakening a “dormant” AIDS virus infection on the continent.

An advisor to the WHO admitted, “Now I believe the smallpox vaccine theory is the explanation for the explosion of AIDS.”

Robert Gallo, M,D., the co-discoverer of HIV, told The Times, “The link between the WHO program and the epidemic is an interesting and important hypothesis.  I cannot say that it actually happened, but I have been saying for some years that the use of live vaccines such as that used for smallpox can activate a dormant infection such as HIV.”

In September 1987, at a conference sponsored by the National Health Federation in Monrovia, California, William Campbell Douglass, M.D., bluntly blamed the WHO for murdering Africa with the AIDS virus.

The 2nd biggest fraud of this century. $90 billion a year going to not finding a cancer cure.

Since 1946 it is said that the American Cancer Society has invested over $2 billion in research trying to find a cure. Cancer spending in 1990 was $27 billion. In 2008, this figure increased over 3 times to a whopping $90 billion. This massive increase in spending is caused by the rapidly increasing costs of new drugs (drugs manufactured for prolonged treatment only – not a cure), robotic surgeries and radiation procedures (life threatening treatment – not a cure), and the increasing number of people being diagnosed with an fraudulently declared incurable cancer.

The good old days of robbing banks and liquor stores are going the way of the dinosaur as the new crime catching across America is knocking-over drugstores from coast to coast.

With more and more Americans developing addictions to prescription drugs, the country is experiencing a surge in violent crimes as fiends are taking drastic measures to fuel their fix.

Prescription drug abuse is nothing new in America, but not only is the problem getting worse in the States, but an increasing number of addicts are resorting to violent crimes to avoid withdrawal.

One study by the Substance Abuse and Mental Health Services Administration (SAMHSA) finds that prescription opiod abuse increased by 111 percent between 2004 and 2008, with almost 2 million Americans admitting to abusing the class of drug ever year, which includes codeine, hydrocodone, oxycodone and others. Expectedly, as use increases, so does misuse. SAMHSA figures reveal that those seeking treatment for opiod abuse made up only 8 percent of the total patient population in 1999, but ten years later that statistic has changed drastically, with one-third of treatment admissions being related to opiate abuse.

In another study from the National Center on Addiction and Substance Abuse (CASA), 15 percent of American high schoolers admitted to abusing prescription pills.

“There has been a gradual increase in prescription pain killer admissions for quite a few years now. But it’s still a great concern because it shows that it’s a continuing problem out there,” says Deborah Trunzo, of SAMHSA’s Center for Behavioral Health Statistics to Medscape Medical News.

“In the United States,” says Mike Adams, “we have a monopolistic health care system that is designed to generate profits, not public health.”

Adams, the editor-in-chief of NaturalNews.com, says that much of America is driven to believe that they need drugs, and with a monopolistic health care system unlike any other in the world, it isn’t the wellbeing of their clients that health care systems are looking out for, he says, but the corporations’ bank accounts.

In America, says Adams, people are trapped in a system of dependence on disease treatment. “The system doesn’t really have the motivation to teach people how to be healthy,” but rather rely on unnecessary — yet costly — medication.

“Other countries are more open to generic drugs, which tend to lower the cost of conventional health care,” says Adams, and while nations abroad might be more willing to encourage alternative methods of treatment, American advertisements insist that the country is in need of prescription pills — and as a result the clients of health care systems have an insatiable craving for medication.

This isn’t necessary, though, attests Adams. Instead, he says, it’s “a clear example of corporations really betraying the public interest just so they can make more money.”

“The US has mastered that art it seems in the drug industry.”

In the current state of the healthcare industry, poisons are legal, and useful plants are not. Everytime we buy drugs, we are in fact paying for our own death. On the other hand, the banning of hemp benefit largely the makers of medicines, industrial chemical manufacturer like Dupont, liquor makers, and drug traffickers such as Bush and Clinton.

Top 10 Cannabis Studies the Government Wished it Had Never Funded

10) MARIJUANA USE HAS NO EFFECT ON MORTALITY: A massive study of California HMO members funded by the National Institute on Drug Abuse (NIDA) found marijuana use caused no significant increase in mortality. Tobacco use was associated with increased risk of death. Sidney, S et al. Marijuana Use and Mortality. American Journal of Public Health. Vol. 87 No. 4, April 1997. p. 585-590. Sept. 2002.

9) HEAVY MARIJUANA USE AS A YOUNG ADULT WON’T RUIN YOUR LIFE: Veterans Affairs scientists looked at whether heavy marijuana use as a young adult caused long-term problems later, studying identical twins in which one twin had been a heavy marijuana user for a year or longer but had stopped at least one month before the study, while the second twin had used marijuana no more than five times ever. Marijuana use had no significant impact on physical or mental health care utilization, health-related quality of life, or current socio-demographic characteristics. Eisen SE et al. Does Marijuana Use Have Residual Adverse Effects on Self-Reported Health Measures, Socio-Demographics or Quality of Life? A Monozygotic Co-Twin Control Study in Men. Addiction. Vol. 97 No. 9. p.1083-1086. Sept. 1997

Congress will hear a bill that would end marijuana prohibition.

Lawmakers in DC will be presented with a bill today that could legalize marijuana across the US. When the legislation is introduced to the House, it will mark the first ever bill proposed to Congress to end federal marijuana prohibition.

Though it is being billed as “bipartisan legislation,” Ron Paul is the only Republican that has so far signed-on. He has made the legalization of marijuana one of the priorities of his 2012 presidential run.

Lee added that in the 40 years since President Richard Nixon launched his “war on drugs,” the US has spent over a trillion dollars to incarcerate millions of young people on drug charges.

An average of 800,000 people are arrested each year on marijuana charges.