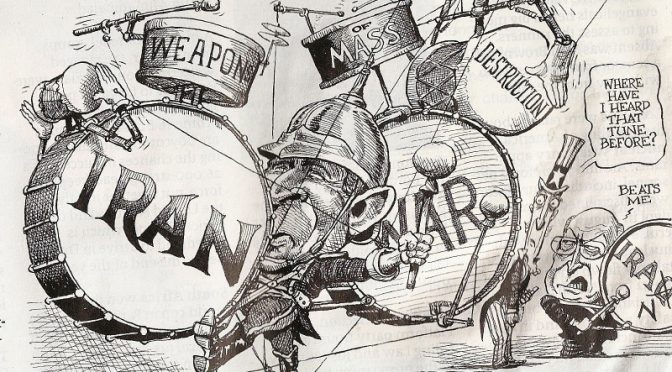 The launching of an outright war using nuclear warheads against Iran has been on the active drawing board of the Pentagon since 2005.

If such a war were to be launched, the entire Middle East Central Asia region would flare up. Humanity would be precipitated into a World War III Scenario.

World War III is not front-page news. The mainstream media has excluded in-depth analysis and debate on the implications of these war plans.

The onslaught of World War III, were it to be carried out, would be casually described as a “no-fly zone”, an operation under NATO’s “Responsibility to Protect” (R2P) with minimal “collateral damage” or a “limited” punitive bombing against specific military targets, all of which purport to support “Global Security” as well as “democracy” and human rights in the targeted country.

Public opinion is largely unaware of the grave implications of these war plans, which contemplate the use of nuclear weapons, ironically in retaliation to Iran’s nonexistent nuclear weapons program.

Moreover, 21st Century military technology is at an advanced stage of development combining an array of sophisticated weapons systems.

We are at the crossroads of the most serious crisis in World history.

The future of humanity is at stake.

The present situation is one of advanced war planning by a formidable military force using nuclear warheads.

The Pentagon’s global military design is one of world conquest.

The military deployment of US-NATO forces is occurring in several regions of the World simultaneously.

Militarization at the global level is instrumented through the US military’s Unified Command structure: the entire planet is divided up into geographic Combatant Commands under the control of the Pentagon. According to (former) NATO Commander General Wesley Clark, the Pentagon’s military road-map consists of a sequence of war theaters: “[The] five-year campaign plan [includes]… a total of seven countries, beginning with Iraq, then Syria, Lebanon, Libya, Iran, Somalia and Sudan.”

Military action is waged in the name of the “Global War on Terrorism” and Global Security. It has a stated “humanitarian” “pro-democracy” mandate.

It is predicated on the notion that the West’s arsenal of tactical nuclear weapons are (in contrast to those [nonexistent] of the Islamic Republic), according to expert scientific opinion on contract to the Pentagon, “harmless to the surrounding civilian population because the explosion is underground.”

Irresponsible politicians are unaware of the implications of their actions. They believe their own war propaganda: nuclear weapons are heralded as an instrument of peace and democracy.

War is heralded as a peace-keeping making operation carried out with the support of the “international community”.

The victims of war are described as the perpetrators. Iran and Syria constitute a threat to Global Security thereby justifying pre-emptive military action.

One thought on “World War III: The Launching of a Preemptive Nuclear War against Iran”