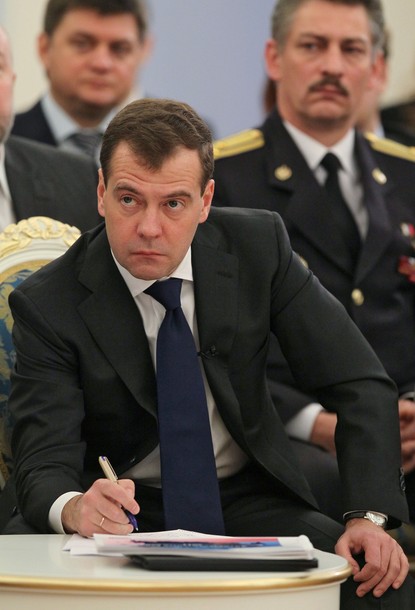 Medvedev on US: ‘If they continue to push us around, we’ll push back’

President Dmitry Medvedev has spoken out after a telephone conversation with his US counterpart, saying Obama’s comments on Russia’s recent parliamentary elections were “unacceptable”.

Speaking to a number of United Russia MPs, Dmitry Medvedev stated that, correctly delivered, thoughts and comments on a country’s electoral process are acceptable – and welcome. But when they are reminiscent of Cold War-era statements, it is outrageous. “That is not a reset [in relations], and I’ve had to remind my colleague of that”, said the president.

Domestic criticism is of course welcome and constitutionally-justified, Medvedev told MPs. “The streets are not the US State Department. The streets reflect the mood of our people.” The Russian leader was referring to a recent comment made by the Secretary of State Hillary Clinton, who called these past elections “neither free nor fair.”

Medvedev summed up his statement by saying that he will not stand for intimidation. Russia will continue to pursue its interest within the international arena. “If they want to push us around, we’ll push back. But if they hear our concerns, then we can work together.”

Obama Raises the Military Stakes: Confrontation on the Borders with China and Russia

Obama pronounced a policy of military encirclement of China based on stationing a maritime and aerial armada facing the Chinese coast – an overt policy designed to weaken and disrupt China ’s access to raw materials and commercial and financial ties in Asia . Obama’s declaration that Asia is the priority region for US military expansion, base-building and economic alliances was directed against China , challenging Beijing in its own backyard. Obama’s iron fist policy statement, addressed to the Australian Parliament, was crystal clear in defining US imperial goals…

A most recent example of Obama-Clinton’s delusional, but destructive, efforts to deliberately disrupt China ’s economic ties in Asia, is taking place in Myanmar ( Burma ). Clinton ’s December 2011 visit to Myanmar was preceded by a decision by the Thein Sein regime to suspend a China Power Investment-funded dam project in the north of the country. According to official confidential documents released by WilkiLeaks the “Burmese NGO’s, which organized and led the campaign against the dam, were heavily funded by the US government”(Financial Times, Dec. 2, 2011, p. 2). This and other provocative activity and Clinton ’s speeches condemning Chinese “tied aid” pale in comparison with the long-term, large-scale interests which link Myanmar with China . China is Myanmar ’s biggest trading partner and investor, including six other dam projects. Chinese companies are building new highways and rail lines across the country, opening southwestern China up for Burmese products and China is constructing oil pipelines and ports. There is a powerful dynamic of mutual economic interests that will not be disturbed by one dispute (FT, December 2, 2011, p.2). Clinton’s critique of China’s billion-dollar investments in Myanmar’s infrastructure is one of the most bizarre in world history, coming in the aftermath of Washington’s brutal eight-year military presence in Iraq which destroyed $500 billion dollars of Iraqi infrastructure, according to Baghdad official estimates. Only a delusional administration could imagine that rhetorical flourishes, a three day visit and the bankrolling of an NGO is an adequate counter-weight to deep economic ties linking Myanmar to China . The same delusional posture underlies the entire repertoire of policies informing the Obama regime’s efforts to displace China ’s predominant role in Asia .

Recently, the mainstream media had gone so low in trying to discredit the recently concluded Russian elections by posting fake videos purporting to be a growing civil unrest within that country.

Another sign of the same desperation is… Be careful this one is a double edged blade, i.e. one is to paint Russian ties to Occupy Wall Street protestors and to lay down the groundwork for deniability regarding Corporate US  involvement of the “civil unrest happening” in Russia…

December 11, 2011 – As the evidence begins to mount pointing the accusing finger at the increasingly illegitimate corporate-financier occupiers of the West’s governments as having built up Russian opposition movements and being behind the current unrest filling Russia’s streets, the corporate media has already started to rewrite events as they unfold.

Wall Street and London’s media machine claims Russia’s protests are “leaderless” and not being organized by political opposition movements – even as it interviews protest organizers such as the above pictured opposition leader, Boris Nemtsov, who takes to stages build amidst supposedly “spontaneous” protests with a troupe of US NED-funded NGO leaders and opposition parties cheerleading what is clearly yet another Western-funded color revolution.

An amazing piece of mid-event revisionism titled, “Moscow braces as election protest goes viral,” desperately attempts to portray the protests as “leaderless” even as the article itself interviews “organizers.” Quoting unnamed, and most likely nonexistent protesters, the article featured in the Sydney Morning Herald insists protesters claimed, “I came on my own. I learnt about it on the web.” But the article then states (emphasis added), “and last night, thanks to the web, organisers were expecting more than 30,000 people to demonstrate against what they see as the rigged results of last Sunday’s elections, because that’s how many have committed themselves to a sign-up sheet on Facebook.”

Congress has given the U.S. military a green light to conduct offensive military activities in cyberspace.

“Congress affirms that the Department of Defense has the capability, and upon direction by the President may conduct offensive operations in cyberspace to defend our Nation, allies and interests,” said the FY 2012 defense authorization act that was adopted in conference this week (section 954).

The blanket authorization for offensive cyber operations is conditional on compliance with the law of armed conflict, and the War Powers Resolution, which mandated congressional consultation in decisions to go to war.

“The conferees recognize that because of the evolving nature of cyber warfare, there is a lack of historical precedent for what constitutes traditional military activities in relation to cyber operations and that it is necessary to affirm that such operations may be conducted pursuant to the same policy, principles, and legal regimes that pertain to kinetic capabilities,” the conference report on the defense authorization act said.

As if they are not using it already…

If the U.S. military wants live video of a missile launcher vehicle halfway around the world, it must rely upon spy planes or drones in danger of being shot down. Tomorrow, the Pentagon wants space telescopes hovering in geosynchronous orbit that could take real-time images or live video of any spot on Earth.

Contrary to Hollywood’s ideas, today’s spy satellites that orbit the Earth at fast speeds and relatively lower altitudes can only snap photos for the U.S. military and intelligence agencies. Taking live video of a single location would require satellites to hover by matching the Earth’s rotation in geosynchronous orbit about 22,000 miles (36,000 kilometers) high — but creating and launching a space telescope with the huge optics arrays capable of seeing ground details from such high orbit has proven difficult.

As a solution, DARPA — the Pentagon’s research arm — envisions a lightweight optics array made of flexible membrane that could deploy in space. Ball Aerospace has just completed an early proof-of-concept review as part of a DARPA contract worth almost $37 million.

Earlier on, Obama tried to recover his fully intact spyplane which crash landed in Iran. This single event decloaked US defense vulnerability…

Cyber war on US drones? Another spy craft crash, now in Seychelles

With America still scrambling to explain why and how they lost a drone aircraft over Iran last week, the Pentagon is trying to make sense of how another high-tech unmanned spy craft crashed Tuesday morning in the Seychelles.

For the second time in two weeks, American authorities lost contact with a drone aircraft, this time resulting in a fiery crash in the Seychelles in the Indian Ocean. The United States has operated an Air Force base there since 2009 to dispatch drones for use in anti-piracy missions and to patrol the skies over Somalia and elsewhere.

Officials at the US embassy in Mauritius confirmed the crash onTuesday morning, revealing that an MQ-9, or “Reaper” drone, had landed at Seychelles International Airport, citing mechanical issues. 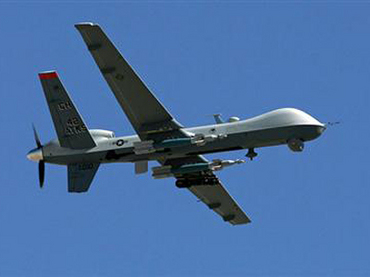 A week earlier, the Department of Defense denied losing a drone, only for Iran authorities to in turn publish video proof of an American craft that they have recovered. The Pentagon later admitted that they lost contact with the drone while allegedly flying it over Afghanistan, prompting President Obama to ask Tehran to return the spy plane. Iranian President Mahmoud Ahmadinejad has shot down Obama’s plea, however, telling Venezuelan state television this week, “The Americans have perhaps decided to give us this spy plane. We now have control of this plane.” Ahmadinejad added that Iranian authorities are able to make sense of the craft’s complex technical system, perhaps providing a crucial addition to Iran’s arsenal as tensions between Tehran and Washington intensify over a budding nuclear program overseas.

New Satellite Images Reveal A Secret US Drone Base In Nevada

A secret U.S. airfield, used for the testing and training of unmanned drones, has been found on Google Earth by aviation website Flight Global (via rt.com).

The airfield, located in Yucca Lake, Nevada, has been analyzed and is said to contain a 5,200 foot runway with an Unmanned Aerial Vehicle (UAVs, or drones) on the parking ramp, as well as hangers, a parking lot, a security perimeter and a special clamshell hanger used for housing special drones, called “Beasts.”

And who can dismiss this?

Human misery is growing. So is public anger. Rage across America and Europe reflect it. Gerald Celente explains the stakes, saying:

“When people lose everything and have nothing else to lose, they lose it.”

During WW II, loyal Japanese Americans were lawlessly detained. Today, social justice protesters and others wanting change are at risk. Political Washington’s targeting them to assure business as usual continues. Obama’s fully on board.

Obama will sign it into law. The measure ends constitutional protections for everyone, including US citizens. Specifically it targets due process and law enforcement powers.

With or without evidence, on issues of alleged terrorist connections posing national security threats, the Pentagon now supplants civilian authorities. It’s well beyond its mandate.

Our hunch is that there will be a US Revolution 2.0 next year. This revolution will eventually provide a transition towards a cybernated popular participation in the formulation of public policies and the actual automated delivery of public services; a full implementation of a resource-based economy. There is already a very accelerated growth of consciousness towards this only alternative scenario. Humanity is not turning back.

If the Dark Cabal will continue to push us around, it is only imperative that we must push them back.