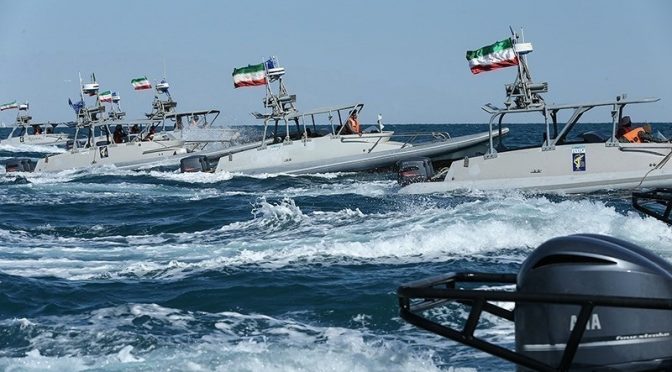 With tensions around the Strait of Hormuz sky-high, Iranian plans to conduct the country’s “greatest naval war games” could coincide with joint US-Israeli exercises in the Persian Gulf. With both sides taking positions, could a real battle be looming?

­Hopefully the massive exercises will remain just that. But with three armies on the playing board, one spark could be enough to ignite an all-out war.

Iran, which recently held a 10-day naval exercise near the Strait of Hormuz to demonstrate its military prowess, is now planning new, ‘massive’ naval drills codenamed The Great Prophet.

The drills will be carried out by the country’s elite Revolutionary Guard, which has its own air, naval and ground forces separate from those of the regular military.

On Thursday, the semiofficial Fars news agency quoted the Iranian Revolutionary Guard’s naval commander, Admiral Ali Fadavi, as saying the next round of war games would be “different” from previous ones, AP reports.

However, on the same day, an Israeli military spokesman speaking under condition of anonymity said his country was gearing up for the largest joint missile defense exercise ever held with the United States.

The drill, called “Austere Challenge 12,” is scheduled to take place in the upcoming weeks. Its primary purpose is to test multiple Israeli and US air defense systems, especially the “Arrow” system, which the country specifically developed with help from the US to intercept Iranian missiles.

Perhaps more alarmingly to the Iranian leadership, thousands of US troops will be deployed to Israel in support of the drill.

While the Israeli military claims the latest exercises are unconnected with recent events, Martin Van Creveld, a military historian at the Hebrew University of Jerusalem, said the drill would be used to gain leverage over Iran.

“Defending against an attack is not something that you improvise from today to tomorrow. It’s something you have to prepare, you have to rehearse… This, among other things, is an exercise to show Iran, the people in Tehran, that Israel and the United States are ready to counterattack,” AP cites him as saying.

But Jamal Abdi of the National Iranian American Council in Washington told RT the actions of America and Israel are not merely preventative.

“We’re getting closer and closer to war with Iran. Anybody who argues that this extraordinary confluence of events – the planned exercises by the US and Israel, the exercises that Iran was doing in the Persian Gulf, we have sanctions in place with no diplomacy – the only way that that ends is through confrontation,” he said.

Tensions in the region have soared since the Islamic Republic threatened to block the Strait of Hormuz – through which one sixth of the world’s oil passes – in response to Western plans to ban oil imports from Iran.

And following Washington’s decision Saturday to approve sanctions targeting the country’s oil Industry over Tehran’s alleged secret nuclear weapons program, the game of brinkmanship being played by all sides could push the entire region over the edge.

Aside from petrodollar, another significant sources of funds for the Nazionist Khazarian Mafia is the healthcare industry which registered a whopping $3.09 trillion in 2014, and is projected to soar to $3.57 trillion in 2017, in the US alone. We believe that this is just a conservative figure.

We can avoid using drugs, defeat any viral attack and scaremongering, like the Zika virus, easily by knowing how to build our own comprehensive antiviral system. Find more about it here.