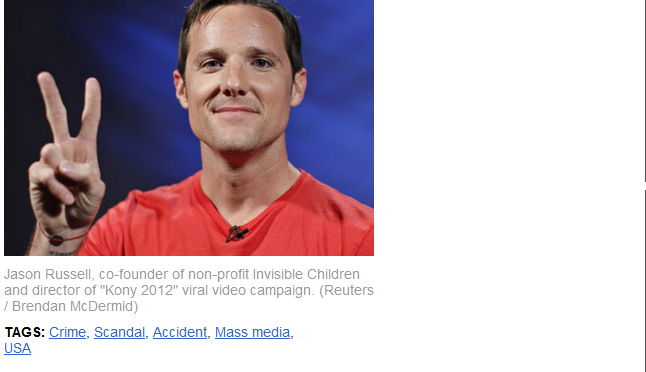 Recently the web is flooded with Kony stuffs which this blog didn’t really bother that much. In fact, we never ever mention a hint of it until all the facts are adequately known. Bear in mind, lies are sandwiched between truths. 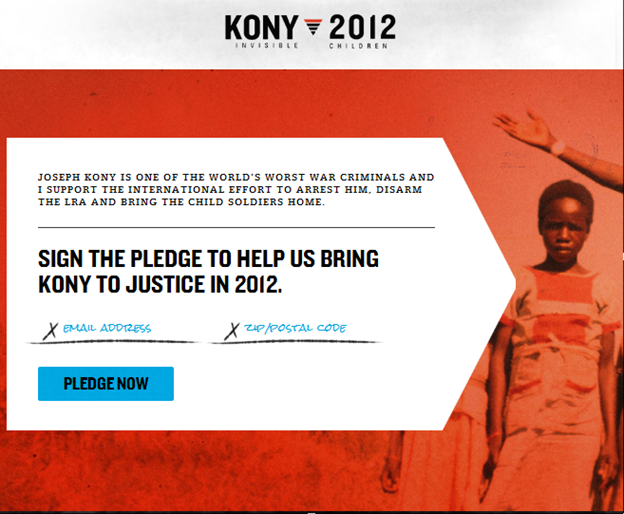 Behind the compelling façade is a hidden agenda

KONY 2012: Merchandising and Branding Support for US Military Intervention in Central Africa 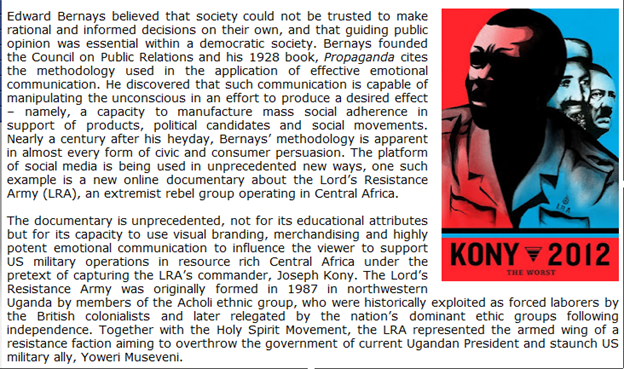 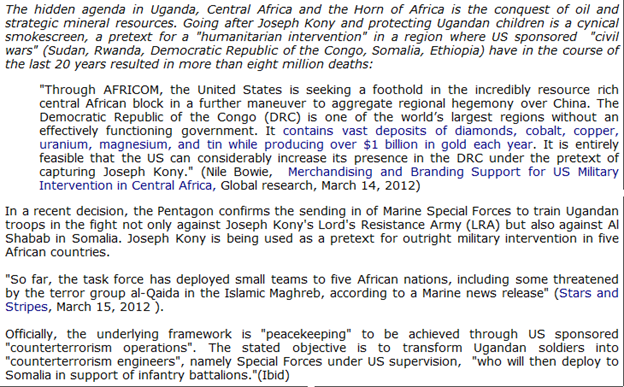 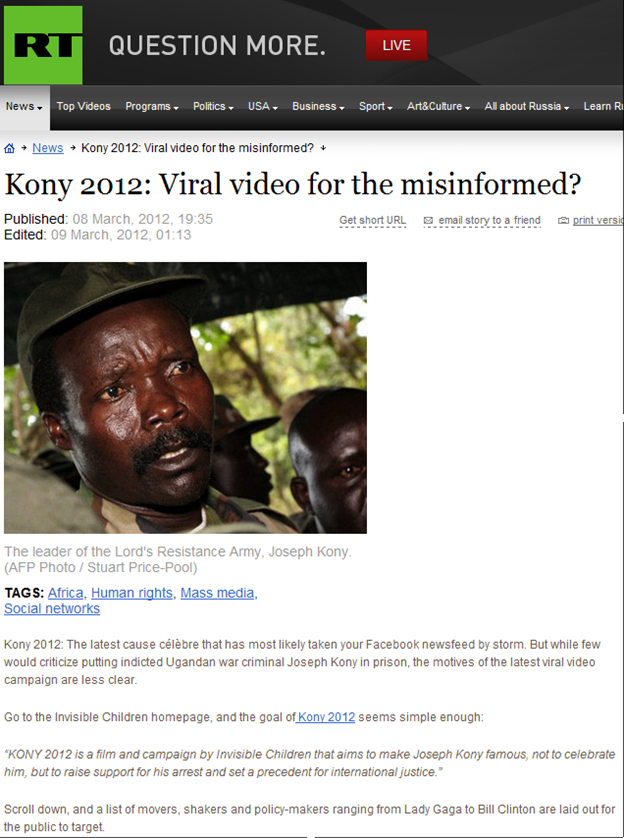 “On the surface, this is a simple black-and-white story:  Joseph Kony, via the Uganda-based Lord’s Resistance Army (LRA), has lead a violent campaign to set up a theocratic government at home, forcing  enslaved child soldiers to commit unspeakable acts.

But dig a bit deeper, and one might want to think twice before donating to the Invisible Children charity.

For one, Invisible Children has blurred the line between charity and politics, advocating direct military action.  They have also been accused of providing financial support to the Ugandan government’s military and the Sudan People’s Liberation Army, both of which have regularly been charged with human rights abuses.

The group denies the claim, saying “none of the money donated through Invisible Children ever goes to the government of Uganda. Yet the only feasible and proper way to stop Kony and protect the civilians he targets is to coordinate efforts with regional governments.”

The group has also been accused of being heavy on advocacy and weak on aid. Writing on the social media site tumblr.com, sociology and political science student Grant Oyston said, “As a registered not-for-profit, its finances are public. Last year, the organization spent $8,676,614. Only 32 per cent went to direct services (page 6), with much of the rest going to staff salaries, travel and transport, and film production. This is far from ideal for an issue which arguably needs action and aid, not awareness, and Charity Navigator rates their accountability 2/4 stars because they lack an external audit committee. But it goes way deeper than that.”

The real question is, why has Kony 2012 skyrocketed to the top of social media consciousness?  Writing for Foreign Policy magazine, Uganda-based journalist Joshua Keating perhaps puts it best.

“It would be great to get rid of Kony. He and his forces have left a path of abductions and mass murder in their wake for over 20 years. But let’s get two things straight: 1) Joseph Kony is not in Uganda and hasn’t been for 6 years; 2) the LRA now numbers at most in the hundreds, and while it is still causing immense suffering, it is unclear how millions of well-meaning but misinformed people are going to help deal with the more complicated reality,” Keating writes.” More »

We do need to question more.

Just a few hours ago, we received an update about the arrest of the director of the Kony2012 viral video… 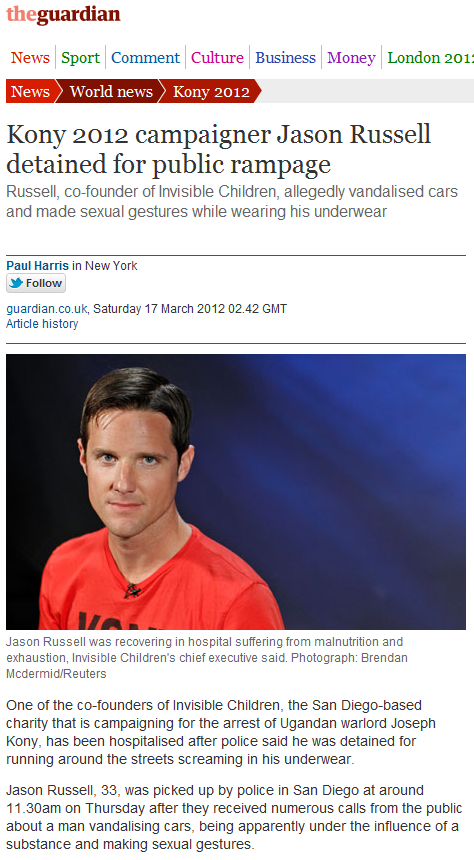 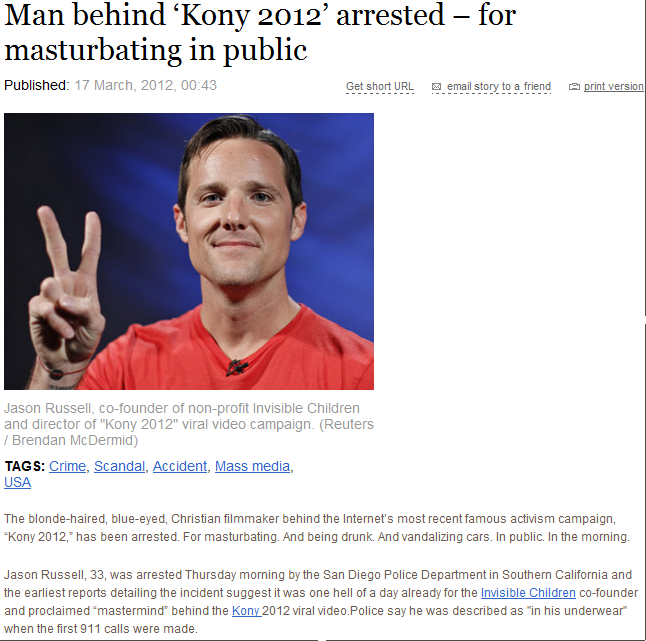 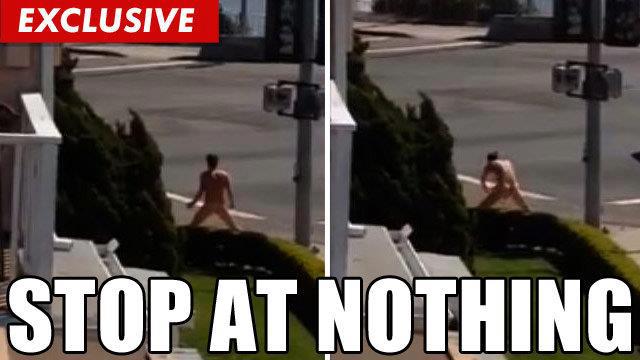