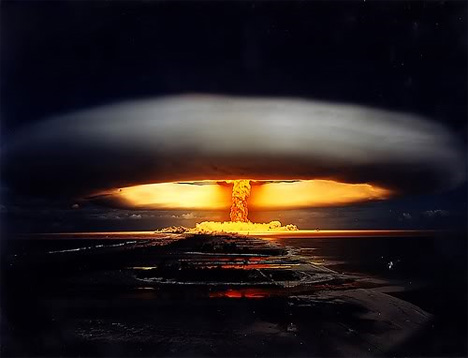 The following message came from the gnostic illuminati who warned us of a terror attack before 311. They have also issued many false alarms but we still think this message should be taken seriously.

oh boy. the text below just came in an hour ago. they send it to me and no one else, then i report it. no one listens, then it happens, then they blame me. anyway, its been interesting man, i have to confess it. but i will do one more thing and get out of here for good.

say thanks to the hikaruland people, they were very nice. too bad we never got to play the chess game. all the best.

The final attempt to reason with the Satanic Cabal has failed. A Pre-Emptive Strike has now become Inevitable & Imminent. Our Primary Target is American Forces Yokota Air Force Base.

Although it is impossible to predict with 100% Exactitude the Effects of ANY NUCLEAR Detonation, our experts assure us of the Following :

The Device is 5000 Kilotons and has been strategically positioned deep underground and at a crucial juncture of the Ancient Subterranean Canal System in the Long Forgotten Land of Lemuria, which lives on to this day.

We expect minimal ( if any ) Nuclear Fallout, a Tsunami is NOT Anticipated. Our Main Objective is to Manifest a Sink-Hole in the Western ” Tama ” Area.

From the Tama Gawa in the South/SW to the Seibu Dome in the North/NE. The ” Evil ” Entity Residing on Land illegally Occupied by the U.S. Forces of Yokota Air Base …. Will Be Consigned to the Hell from which it came.

We hope to avoid Civilian Casualties and URGE ALL Tokyo Residents living West of Tachikawa to Evacuate Immediately. What we cannot predict is the exact size of the subsequent earthquake which will shake the entire “Kanto” Plain, but it would not be surprising if it exceeded 10+ on the Richter Scale.

We Undertake this Action in the name of the PEOPLE .… Against Tyranny.

There is always risk when it comes to excising a cancer, it cant be helped. But I confidently say that History Will judge us as ” Liberators of Humanity.”