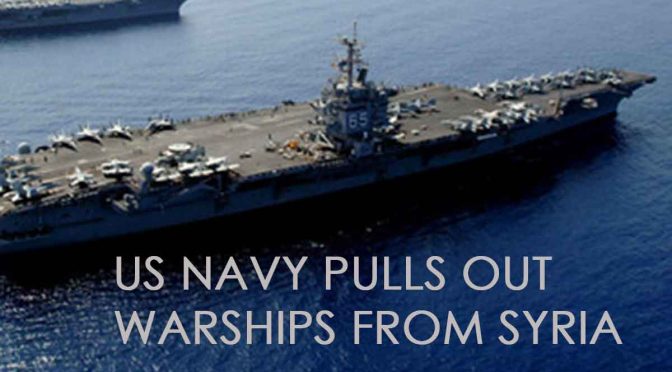 After the US elections where Obama was proclaimed as the winner, the second termer then flow to Asia instead of going back to UK to pay homage to the Crown and the Cross on top of it. This is just one sign that the US Presidency may be changing side as that article suggested.

We will soon find out if this indeed is what is claimed. 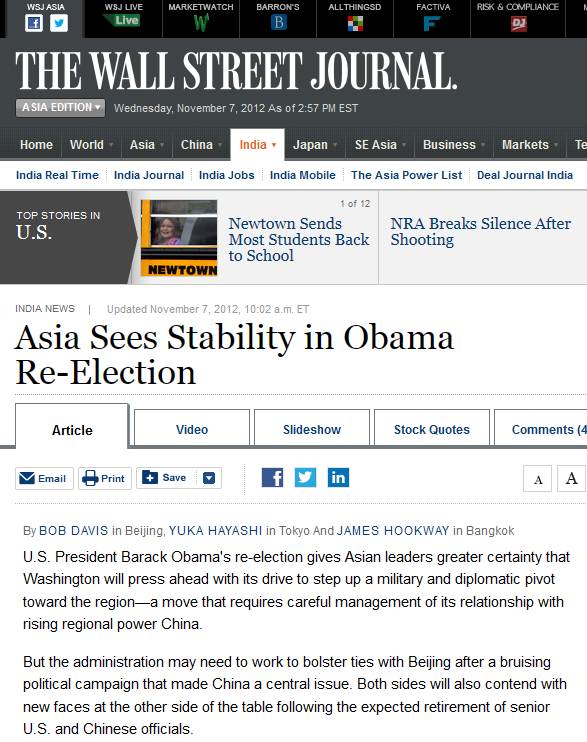 Still, China experts said Mr. Obama’s victory will likely be positive for the relationship. “Mr. Obama is the lesser of two evils,” said Shi Yinhong, an expert on U.S.-China relations at Renmin University in Beijing.

“The rivalry will remain between the U.S. and China, but Obama offers a much more moderate approach to China,” Mr. Shi added.

Recently, a move that have angered Turkey is the withdrawal of two US Navy aircraft carriers from Syria. 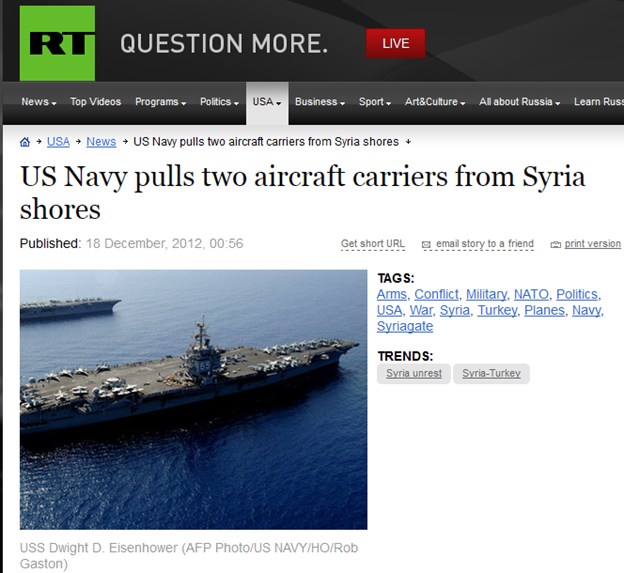 Two aircraft carriers stationed off the Syrian coast were sent back to the US this week in a move that the Obama administration thought would ease tensions, but angered Turkish officials who hoped for significant US military presence in the region.

The USS Eisenhower aircraft carrier and the USS Iwo Jima Amphibious Ready Group and its 2,500 marines were recalled after being stationed on the Syrian coast, allegedly in preparation of potential military invasion.

The USS Eisenhower, which has the capacity to hold thousands of men, joined the other warship during the first week of December, ready to launch an American-led military intervention “within days” if Syrian President Bashar al-Assad were to use chemical weapons against the opposition, Time reported. But as the violence escalated in the past few days, the warships took off and headed back to the US.

The US usually has two aircraft carriers stationed in the Persian Gulf at all times, but will only have one deployed this month –  the USS John C. Stennis, which is stationed nowhere near Syria. By recalling the USS Eisenhower and the USS Iwo Jima Amphibious Ready Group, the US simply outraged its key ally in the region – Turkey.

We all know by now that the war in Syria is injected by the Nazi faction of the CIA. This war machine withdrawal therefore is a big blow to the Dark Cabal and a sign that WW3 will never push through.

In another closely related development, Russia is sending warships to the Mediterranean for possible “Syria evacuation”. Of course, that’s how they sugarcoat their true intentions but it is very clear that these warships could conduct “air defense, anti-ship warfare and anti-submarine warfare” when need be. 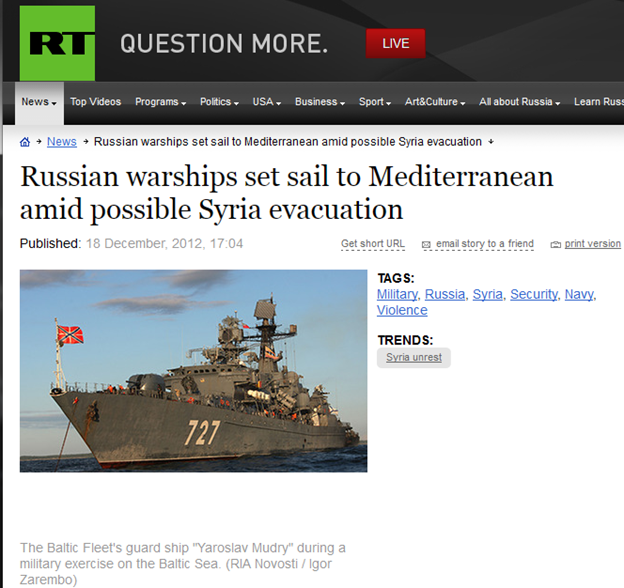 The Russian Navy has sent five ships to the Mediterranean Sea to replace the region’s existing fleet. The move comes after the foreign ministry said it may call for the evacuation of Russian citizens in Syria if the government in Damascus falls.

Three warships and two support ships of the Russian Baltic Fleet are set to join the Russian naval forces in the Mediterranean.

The Neustrashimyy-class frigate Yaroslav Mudri and landing ships Kaliningrad and Aleksandr Shabalin, accompanied by a towboat and a tanker ship, have set sail from their base in Baltiysk, the defense ministry announced on Tuesday. Their mission includes exercises in air defense, anti-ship warfare and anti-submarine warfare, the Navy statement said.

The Russian President Vladimir Putin is considered as the de facto leader of the BRICS180+ nations moving towards massive worldwide economic reforms. His words and actions bear watching especially at this point in time. An EU-Russia Summit is scheduled on December 20-21 this year.

If we have to put Neil Keenan’s video update where he mentioned that some “good news might be announced before Christmas” then a possible economic assistance might be extended during this summit to countries like Spain, Greece and Ireland.

Of course, we will be expecting more. 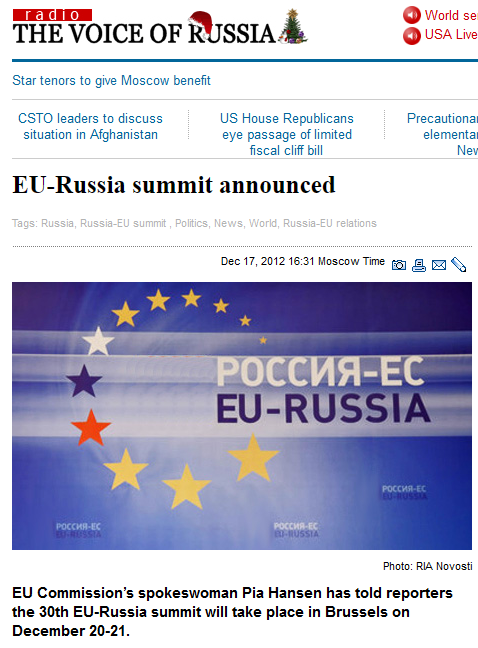 Ms. Hansen said this regular working summit will give an overlook of the cooperation results so far. 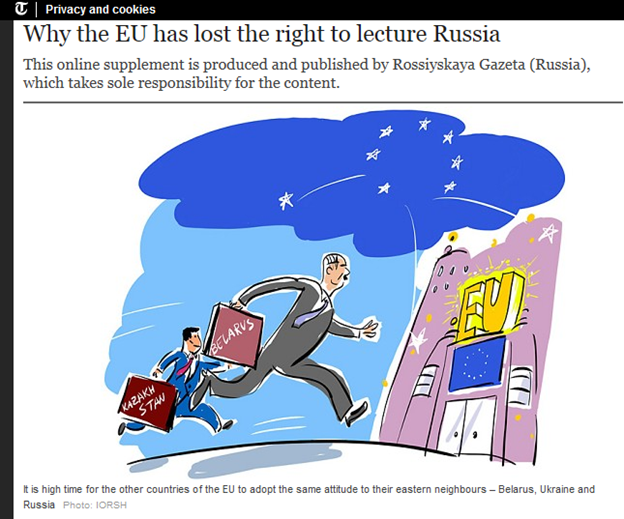 The heated debates in Britain around the country’s contribution to the EU budget are seen from , says Dmitry Babich.

Before the current crisis, and especially in the last years of the Soviet Union the European Union (formerly known as the European Community) had a very positive image in all the lands to the east of Poland.

For decades, talks about “European choice” were an important tool used by the pro-western intellectuals and the liberal media to lure Ukraine, Moldova and other post-Soviet states (including Russia) away from the much-maligned and in fact rather mythical “Moscow’s control.” (This control was supposed to be embodied by the Soviet state until 1991 and by the perpetually demonised “Kremlin” later on.)

Now it becomes clear that this black-and-white vision of Europe and “European spirit” is in fact simplified and misleading. “By their fruits ye shall know them,” says the Bible. If the tree of the European Union is so good, how could it bring forth such fruit?

Are we seeing signs of the “end times” of the world as we knew it?

Although we are optimistic that some good things are underway before the year ends, we do acknowledge the legitimate concerns of everyone visiting this blog that all of these might just be a merry go round well scripted show designed to renew the hope and dampen the rising tide of the global revolution.

As with Keenan, Fulford mentioned the 25th of December 2012 in his most recent update.

We have our own deadline and when that comes and nothing happens then we will continue with greater vigor what we have already been doing.

We are currently working on a better version of the “Towards Healthcare Emancipation” ebook that encourages even the non-techie to do it. And we intend to write the same fully illustrated DIY manual for free energy next year.

We will push the people’s agenda in our own humble way no matter what the cost might be.

In the meantime, the HAARPing continues across the Philippine Islands. But, as always, we will persevere.

Thank you very much for all the support.

2 thoughts on “Signs of the End Times?”