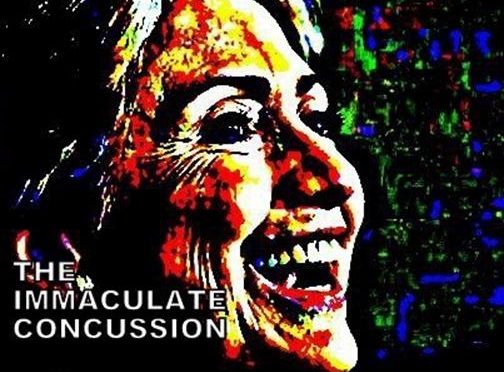 Both Hillary Clinton and George HW Bush are said to be hospitalized right now.

The former is implicated to the Benghazi false flag operation last September 11th and the latter undeniably orchestrated the JFK assassination in 1963 and the murder of Dr. Nikola Tesla in 1943, and the cause for the delay of the release of the Collateral Accounts and the smooth reestablishment of the constitutional Republic of the USA. 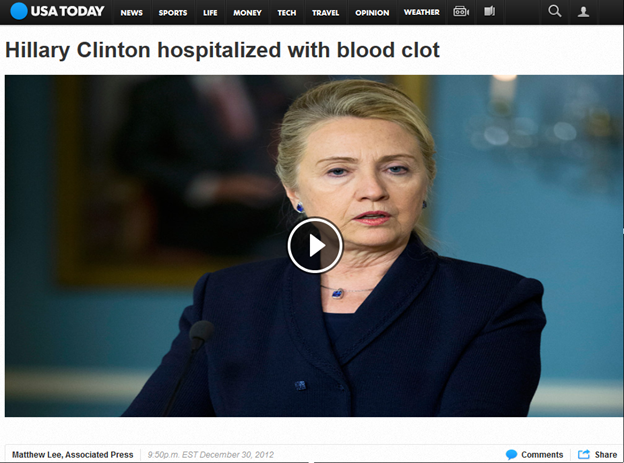 Clinton’s doctors discovered the clot Sunday while performing a follow-up exam related to her mid-December fall resulting from a stomach virus. She hit her head and suffered a concussion.

WASHINGTON (AP) — Secretary of State Hillary Rodham Clinton was admitted to a New York hospital Sunday after the discovery of a blood clot stemming from the concussion she sustained earlier this month.

Clinton’s doctors discovered the clot Sunday while performing a follow-up exam, her spokesman, Philippe Reines, said. He would not elaborate on the location of the clot but said Clinton is being treated with anti-coagulants and would remain at New York-Presbyterian Hospital for at least the next 48 hours so doctors can monitor the medication.

This one is from my FB connections… 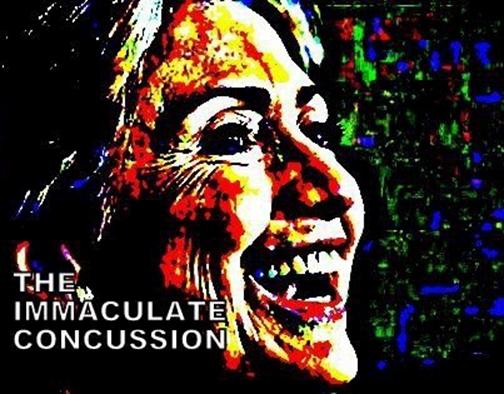 Below is a letter written by my dear friend and business partner Jim Fisgus. He is an Emergency Room Doctor. From an ER doctor who sent this to Fox ….

I have been expecting someone at Fox to do a serious on camera consult with a medical specialist such as an Emergency Physician (not Dr. Alvarez!) (someone who commonly deals with head injury and concussion on a daily basis) in regards to the purported disability suffered recently by Secy of State H. Clinton leaving her unable to testify before the Congress about the Benghazi incident.

I am a board certified emergency physician with more than 30 years’ experience in a busy ER with substantial trauma experience.

There is a wide spectrum of severity of concussion symptoms as a result of head injury. The great majority of concussions are minor and leave the patient with little if any disability. Serious concussions are unusual and are typically the result of serious force applied to the head (MVA, Football, Assault, Fall from ladder, etc) with associated scalp trauma, laceration, abrasion, loss of consciousness, headache, vomiting, visual changes, dizziness and ataxia. Any reasonable physician faced with such a trauma would immediately transport the patient to a hospital ER and a non contrast CT head would be performed immediately. If symptoms were significant and persistent, especially for someone of this public stature with presidential aspirations, this patient would be hospitalized for observation and a neurosurgery consult and likely an MRI study of the brain as well. Absent this situation any symptoms of concussion would likely be limited, transitory in nature, perhaps mild headache, and would not prevent the patient from daily activities.

Does anyone really believe that a person of Mrs. Clinton’s stature and responsibilities could have a serious head injury, limiting her ability to perform her duties, with possible serious even life threatening complications, and she would NOT be evaluated at an ER and admitted to a hospital, and would have treatment limited to bedrest at home???

The probability of a simple faint secondary to a gastroenteritis resulting in a fall with head injury of significance is virtually nil.

As news people, you should ask questions….such as which ER evaluated Mrs. Clinton. If she fell with such force, exactly what injury did she sustain? What struck her head and exactly what part of her head was injured?? Was there a scalp laceration?? Hematoma? Bruise? Abrasion? Do they have a photo of the scalp injury?? Was there a CT Head study performed?? Does she have a brain contusion?? Does she have a subdural hematoma?? Did anyone care to look?? If not, why not??? Did she lose consciousness after striking her head? Was her neck injured. Was her neck xrayed or CT’d?? (Most serious head injuries have associated probable neck injury and pain and a neck fracture must be ruled out.) If she was not taken to a hospital ER then likely there was no significant head injury. Whats exact symptoms of concussion does she have?? Did she have a brain MRI study done? Why not? Which neurosurgeon evaluated her??

Absent the answer to the above questions one can assume this story of the head injury is like a fabrication to relieve her of the responsibility of testifying before congress. 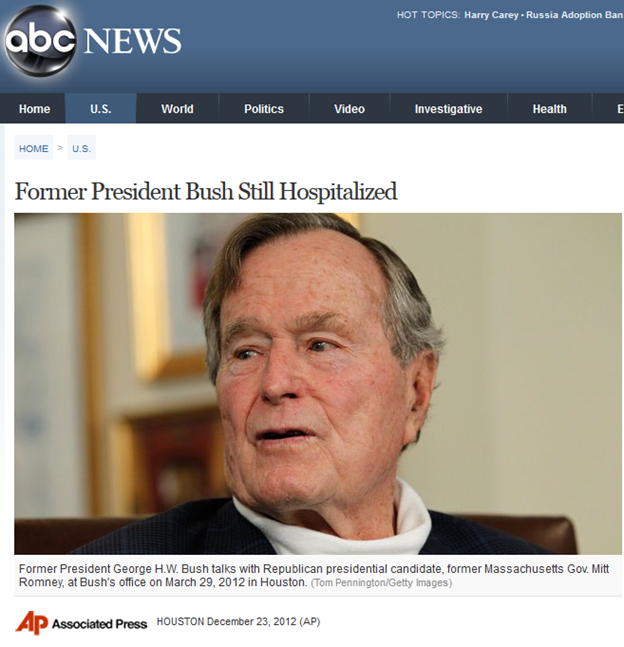 President George H.W. Bush, who has been in a Houston hospital with a lingering cough since November, needs to “build up his energy” before he can be released, doctors said Sunday.

Methodist Hospital spokesman George Kovacik said in an emailed statement that doctors are still optimistic the 88-year-old Bush will make a full recovery, but are being “extra cautious” with his care. Bush is in stable condition, he said.

Soon they will both be dead. Why? That’s the only way they could escape from the wrath of the people. And they’ve done this before.

We’re not talking here about clones yet. It’s hard for most of us to accept that most of the so-called leaders are actually biological automatons. But let’s save that discussion for another day.

In the meantime, we all have reasons to celebrate the New Year 2013.

While the first few days of January may just be the recommencing of the unfinished business to topple the Dark Cabal by WDS, Pentagon WhiteHats, BRICS180+ and Gnostic Illuminati, it is the month of May which is said to be the peak of the Worldwide Revolution.

The desperation has become more deadly, but the people are no longer buying. The lies have lost its venom. The political structure and the Old Media are effectively bypassed. It’s only a matter of time when the rest of the Sheeples would awaken to the profoundly Manipulated Reality they’ve struggled with and long accepted as the Truth.

It’s only a matter of time.

2 thoughts on “Running Out of Script”