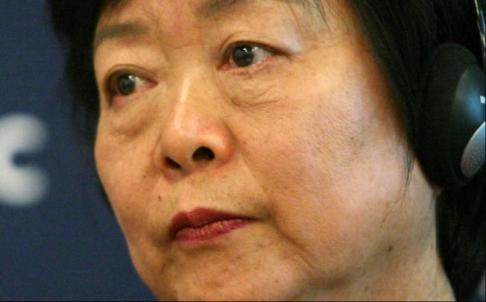 This is another intel from Drake on the personal background of Madame Wu re Global Settlement.

Google search would yield deep connection of this Lady to the Cabalists and the corrupt financial system they built. Drake’s intel below should be reliable.

I must apologize for the amount of time it has taken to complete this investigation. However, obtaining specific information is no longer a simple or easy matter.

This comes directly from China which makes intelligence gathering all the more difficult.

I have stated many times that as I get information/intelligence, I would offer these insights to our audience.

Although this is short, it does get straight to the point. Further, the questions posed are those asked by certain officials of China.*
These sources will remain confidential.

– Madame Wu is NOT related to a former President of China. This woman is not the ex President’s daughter, she is just a banker, not a princess or anything else. She is merely the former governor of the Bank of China not the Central Bank and they are broke…

She is in no way related to the Dynasty nor Royal Bloodline and in fact the Dynasty office would love to speak to Madame Wu as she knows that she has no rights to any of our treasury.

She is going to be in shock because the Dynasty Offices are going to call her. If we are correct her family was the first Chinese family with a gambling license, her tie to Las Vegas.

Her family was taken down by Chairman Mao.

They were hired by the Dynasty as was Sen, Chek, Li, etc.  They are all hired employees and not Family members at all. Don’t believe us read the history.

* Ask Madame Wu where is her Dynasty office and ask her when was the last time she was in Mainland China?

-The answers are: she has no Dynasty office and she hasn’t been in Mainland China in a long time.

Ask her about the 9th or 8th or 7th.  She should know exactly what we are referring to.

She is another thief falsely staking claim to things which are not theirs.  There are 1000’s of these overseas princesses.  They aren’t even full Chinese.  They are all thieves of the people.

It has been very clearly stated that the Collateral Accounts are to benefit the people of the planet.

The Chinese will own their assets as they do now and everything that is theirs falls under their umbrella, which means at least 85% of the accounts.

The accounts have to be audited and reviewed and when sound they can be wrapped up for trades. Governments will not get a dime.

Due to misuse, theft, and refusal to honor agreed contracts of repayment, those who hold responsibility for these accounts, are left with no alternative except calling these ‘usages’, collateral and interest, due and payable.

Happening NOW :
The Rockefeller family is no longer in the United States… Jay and David retired grabbing the money and ran!

There is no more money in the Federal Reserve because The Rockefeller’s took it with them!

With nothing in our vaults, you can see from what is going on, we are near The End.

The Rockefeller’s bought an Island  near Fiji intending to form their own sovereign nation.