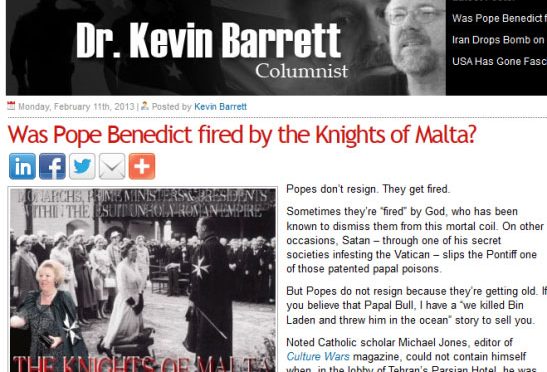 There are reasons why only the Oathkeepers.org is linked from the military category on the right side of the pages on this weblog. We learned early on that the prestigious Veterans’ Today is a huge high level psy-ops tool. These people are more sophisticated than Alex Jones and Jesse Ventura combined.

Gordon Duff, Editor-in-Chief, outed not only himself but the whole VT gang. Duff mentioned in the call [Pete Santilli show] that “these folks are the top psy-operatives in the entire world.”

VETERANS TODAY EDITORIAL BOARD OF DIRECTORS

The Board is responsible for all content on VT and participates in all major decisions regarding content, columnists, and editorial direction for VT

Managing Editors: Managing Editors are responsible for general formatting and editing issues.  This group interacts with and serves our community of columnists/staff writers and reader/subscribers 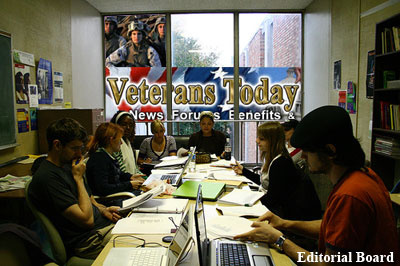 Such high-profile a roster caters generously to the curiosity of the hungry mind.

For a time, rense.com was part of my daily routine. They have good articles, I mean, “new knowledge” and not the stuffs you usually read mainstream. But when Jeff Rense persistently muddled Ben Fulford’s live report, during those periodic guesting in his radio programs, by interrupting midway to the statements, I began to question his real motives.

Those Rense episodes turned out to be some debate sessions between the guest and the anchor himself acting as the moderator at the same time. The same method is being used on both Alex Jones and Jesse Ventura’s Conspiracy Theories.

At the very least, Jeff Rense’s actions were disrespectful. And that reveals the actual sinister motive.

Most of the truth journalists are now dead. Others are in constant death threats. In contrast, the likes of Jeff Rense, Alex Jones, and Jesse Ventura, live on.

Their ilk are engage, without doubt, in destroying legitimate intelligence journalists and first-hand truth-tellers for the ultimate glory of the Vatican.

So what is their take on the recent resignation of the CEO of the Vatican, Inc.?

In the article “Was Pope Benedict fired by the Knights of Malta?” Kevin Barrett takes you in by saying that it was not old age nor a deteriorating health that compelled the pontiff to vacate the golden throne. Instead he suggested Moynihan’s “sacked by the Knights of Malta” line, “to pave the way for a new Pope who will sanction homosexual marriage, non-celibate priests, and other projects aimed at sexualizing and de-sacralizing the Church [Quaglia]”, as if Ratzinger wasn’t one already.

The most visible proof about this financial non-participation is the unending austerity legislated measures across European states that fueled massive unrest throughout the Eurozone.

This financial angle of the true cause of the pontifical resignation is collaborated by Kevin D. Annett in his blog two days ago.

So, how would the most sophisticated psy-ops divert our attention to that simple fact? 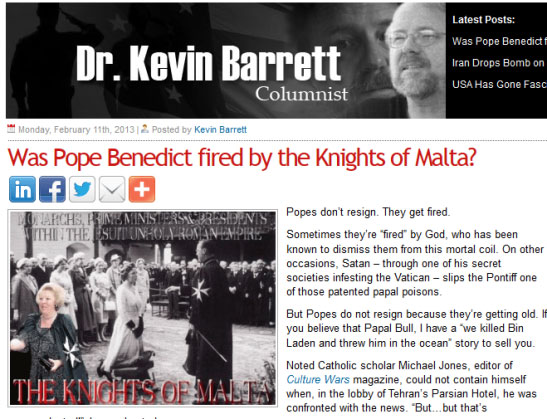 “Or could the Pope’s resignation have been caused by some other intrigue involving the Knights of Malta?

At this point, we just don’t know. The choice of the next pope may reveal the hidden agenda.

Here’s the hot rumor going around Italy, passed to me by journalist Roberto Quaglia: Pope Benedict was fired in order to pave the way for a new Pope who will sanction homosexual marriage, non-celibate priests, and other projects aimed at sexualizing and de-sacralizing the Church. According to this analysis, the judeo-freemasonic secret societies responsible for Vatican II have been pushing Benedict to allow gay marriage and a sex-lovin’ priesthood – but Benedict’s eternal response is “not on my watch!” So, goeth the rumor, they ended Benedict’s watch.

My Muslim friends here in Tehran have a different story: They suspect that the Pope resigned because the Church is about to be blown to smithereens when the 2nd-century Gospel of Barnabas is made public. My most knowledgeable informant on this matter, a certain Professor Ben Isa, claims to know from a trusted source, a Turkish parliamentarian, that a copy of the Gospel of Barnabas, currently under armed guard in a special room of the Turkish capitol in Ankara, has been carbon-dated and certified as arguably the oldest extant Gospel.

The copy of Barnabas in the Turkish capitol, Dr. Ben Isa adds, appears to be identical – word for word – with the other copies, which Western scholars have tried to dismiss as Muslim forgeries.

Now it looks like the “Muslim forgery” predates the canonical gospels!

The import of the new Barnabas is staggering. In a nutshell:

Bye-bye Christianity as we’ve known it.

What? A potential religious war, again?

Fall for it and you’re good for the cookin’.