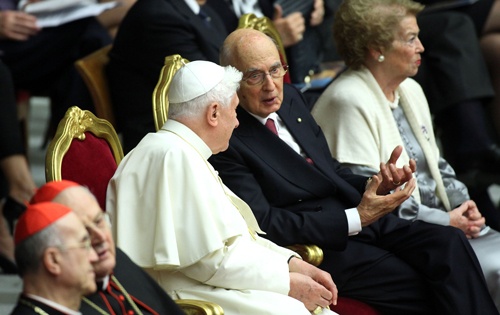 International Tribunal calls on Napolitano to “not collude in criminality”, and announces global campaign to occupy Vatican property and launch human rights inquiry in Italy

Pope Benedict, Joseph Ratzinger, has scheduled a meeting with Italian President Giorgio Napolitano for Saturday, February 23 to discuss securing protection and immunity from prosecution from the Italian government, according to Italian media sources.

Ratzinger’s meeting follows upon the apparent receipt by the Vatican of a diplomatic note from an undisclosed European government on February 4, stating its intention to issue an arrest warrant for Ratzinger, who resigned from his pontificate less than a week later.

In response to the February 23 meeting, the International Tribunal into Crimes of Church and State (ITCCS), through its field Secretary, Rev. Kevin Annett, has written to President Napolitano, asking him to refrain from assisting Ratzinger in evading justice.

The ITCCS letter states, in part,

“I need not remind you, Mr. President, that under international law and treaties that have been ratified by Italy, you and your government are forbidden from granting such protection to those like Joseph Ratzinger who have aided and abetted criminal actions, such as ordering Bishops and Cardinals in America and elsewhere to protect known child rapists among their clergy.

“Your obligation to the Vatican through the Lateran Treaty does not negate or nullify the requirements of these higher moral and international laws; nor does it require that you give any protection or immunity to a single individual like Joseph Ratzinger, especially after he has left his papal office.”

A copy of the complete text of the ITCCS letter follows.

In response to the documented crimes of child torture, trafficking and genocide linked to Pope Benedict and Vatican officials, the ITCCS will be sponsoring a series of ongoing protests and occupations of Roman Catholic churches and offices through its affiliates around the world beginning in Easter week, March 24-31, 2013, and continuing indefinitely.

These actions will accompany the legal efforts to bring Joseph Ratzinger and other Vatican officials to trial for their proven complicity in crimes against humanity and criminal conspiracy.

The Easter Reclamation Campaign will seize church property and assets to prevent their use by child raping priests, who are protected under Catholic canon law. Citizens have this right to defend their communities and children when the authorities refuse to do so, under international law.

Rev. Kevin Annett and an official delegation from the ITCCS Central Office will also be convening a formal human rights inquiry in Rome commencing the week of May 13, 2013, to consider further charges against the Vatican and its new Pope  for crimes against humanity and obstruction of justice.

Rev. Annett and his delegation will be working with organizations across Italy in this investigation. In 2009 and 2010, he held rallies outside the Vatican and met with media and human rights groups across Italy to charge the Vatican with the death of more than 50,000 aboriginal children in Canada. 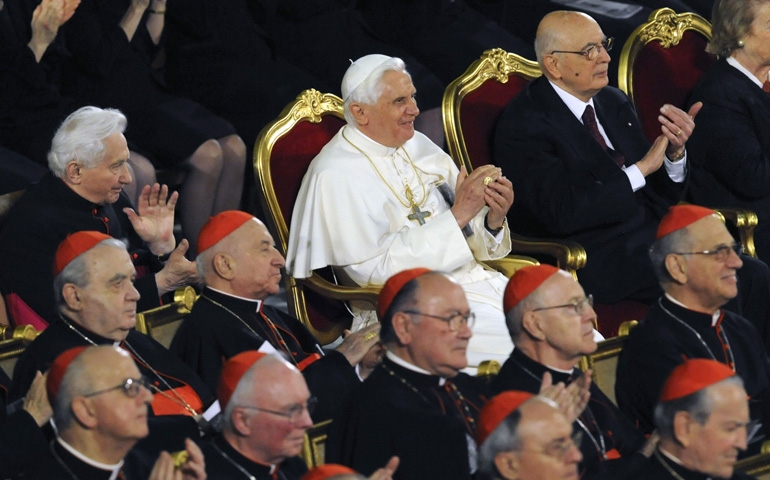 An Open Letter and Appeal to Giorgio Napolitano, President of the Republic of Italy from Rev. Kevin D. Annett, Secretary of the International Tribunal into Crimes of Church and State

On behalf of our Tribunal and people of conscience everywhere, and of the millions of victims of church abuse, I am making an appeal to you regarding your upcoming meeting with Joseph Ratzinger, who will retire soon as Pope Benedict, the Pontiff of the Church of Rome.

Our understanding is that, in the wake of pressure to have him resign his office because of his proven complicity in concealing child trafficking in his church and other crimes against humanity, Joseph Ratzinger is seeking the assistance of the Italian government in securing protection and immunity from legal prosecution.

I need not remind you, Mr. President, that under international law and treaties that have been ratified by Italy, you and your government are forbidden from granting such protection to those like Jospeh Ratzinger who have aided and abetted criminal actions, such as ordering Bishops and Cardinals in America and elsewhere to protect known child rapists among their clergy.

Your obligation to the Vatican through the Lateran Treaties does not negate or nullify the requirements of these higher moral and international laws; nor does it require that you give any protection or immunity to a single individual like Joseph Ratzinger, especially after he has left his papal office.

The need for you to abide by international law and not be seen to collude with Joseph Ratzinger is even more true when one considers the enormity of the crimes of which the Vatican and its highest officials are clearly guilty, according to considerable evidence gathered and documented by our Tribunal and other groups, and acknowledged by many governments.

In Canada alone, the Roman Catholic Church and its Vatican agents have been found guilty of responsibility for genocide and the deaths of at least 50,000 aboriginal child children in the Jesuit-initiated Indian residential school system, that operated until 1996.

In Ireland, more than 10,000 women suffered and were exploited in the Catholic-run Magdalene Laundries, where many of them died. Similar church-run institutions all over the world have caused enormous mortality, disease and ruination for millions of children. And yet the church has never been held accountable or prosecuted for these deaths and the theft of enormous wealth from entire nations.

With the recent initiative of at least one European government and a host of lawyers to bring Joseph Ratzinger and other church officials to trial for these crimes, we feel it is incumbent on you neither to assist nor to be seen to assist or condone the attempt by him to evade, obstruct or delay justice, lest you open yourself to a charge of being an accessory to a crime.

On behalf of our Tribunal and of many people who cannot speak, I call on you to stand on the law of nations and humanity, and offer no support or protection to Joseph Ratzinger or his accessories in their efforts to evade responsibility for their proven crimes.

I look forward to your reply, and to discussing this with you more when I visit your country in May with a human rights delegation to investigate this matter more closely.

Previous action taken against the Holy Mafia [sampler only].

Italian authorities have seized €23 million ($31 million Cdn) of Vatican bank assets as part of an investigation into suspected money laundering.

The Vatican said it was confused as to why financial police targeted the funds in a Vatican account at the Rome branch of the Italian bank Credito Artigiano Spa.

“The Holy See is perplexed and surprised by the initiatives of the Rome prosecutors, considering the data necessary is already available at the Bank of Italy,” the Vatican said in a statement Tuesday.

The Vatican said it has the “utmost faith” in the two men who head the bank, officially known as the Institute for Religious Works (IOR).

The probe is not the first time the bank has faced legal scrutiny. In the 1980s, it was implicated in a scandal that resulted in a banker being found hanging from Blackfriars Bridge in London.

Italian prosecutors maintain Roberto Calvi, head of the collapsed Banco Ambrosiano, was murdered, but there have been no convictions. The Vatican bank was Banco Ambrosiano’s main shareholder.

An Italian Lawyer from Italy, Alfonso Luigi Marra, has gone to the extraordinary length to request that the Public Prosecutor of Rome investigate the Bilderberg Group.