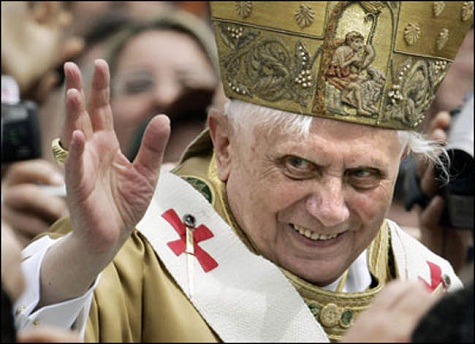 As many of us may already know, the house of the demons known as the Vatican Church is now experiencing a major fallout as a result of the “unexpected” resignation of Pope Malevolent XVI, as more and more people become aware of the crimes it has committed over the centuries of its corporate existence.

However, there are those who consider themselves to be far advanced in their way of thinking as to label the coverage of that fallout as sheer nonsense and utterly BS. These are the people who think they can have their utopian world without getting rid of the pests first, i.e. those parasites that infested the moral fabric of our society even before the day we were born.

We can’t build a castle on a quicksand. We can’t install a new and ideal system on top of the old and rotten. We can’t expect those who live and breathe through that absolutely corrupt system to lay down in silence forever. These evils are beyond redemption. They must be erased not only from our collective memory but from their own, too.

As I watched the presentation of evidence and witnesses against the Church and Crown during the 2nd Session of the International Common Law Court of Justice on trial for the genocide of 50,000 natives in Canada, I couldn’t help but look at the Church as the factual manifestation of Hell on Earth.

You should download that video to have something to remind how these Demons in Robe far exceeded the Nazi’s ruthless actions in WW2.

If there is one institution, err corporation, which needs to be burned down with a fusion bomb, it should be the Church, and those pests creeping in it should each be best served with a generous spray of a compound known as thermate.

Only then can we build a new world free of wars and sufferings, and that generations could build their future on, enhanced upon by the responsible use of suppressed technologies like free energy.

In a statement to Reuters today, Vatican officials announced that Joseph Ratzinger will remain a permanent resident of Vatican City after his resignation. Doing so will offer him legal protection from any attempt to prosecute him in connection with sexual abuse cases around the world, Church sources said today

“His continued presence in the Vatican is necessary, otherwise he might be defenseless”.

This startling admission of guilt by the church is also a direct obstruction of justice, and lends more weight to the charge by the ITCCS and others that the Vatican has arranged with the Italian government to shield Ratzinger from criminal prosecution, in violation of international laws ratified by Italy.

The Vatican decided today to give permanent sanctuary to a proven war criminal by allowing Joseph Ratzinger to obstruct justice and evade prosecution for crimes against humanity. And the government of Italy is colluding in this abrogation of international law.

This decision validates our claims about the criminal conspiracy surrounding Ratzinger and his Vatican co-conspirators. It also makes it clear that the Vatican is a rogue power that is flaunting every law to conceal its own criminality.

In response, the ITCCS calls upon its affiliates and all people of conscience to use our upcoming Easter Reclamation Campaign to converge on Rome and the Vatican to force the extradition of Ratzinger from Vatican City, and place him and his accessories on trial for crimes against humanity.

Commencing Sunday, March 24, 2013, our activists and others will begin an escalating series of Catholic church occupations and seizures of church property to bring about Ratzinger’s extradition and reclaim stolen wealth from the criminal corporation known as Vatican Inc. – in the name of the legion of their victims, both living and dead.

.. and from Kevin Annett – The Rat Scurries Back to Vat!

Those whom the gods destroy, they first drive insane. Especially, it seems, in Rome.

Why would the oldest and wealthiest institution on our planet deliberately prove what its critics say about it, by first tossing their leader, a proven crook, out of his office after he’s threatened with arrest, and then giving him shelter to avoid prosecution? That’s the kind of panic and illogic displayed by a junior document-shredder, not a credible or wise body of men.

And that gives all of us hope. 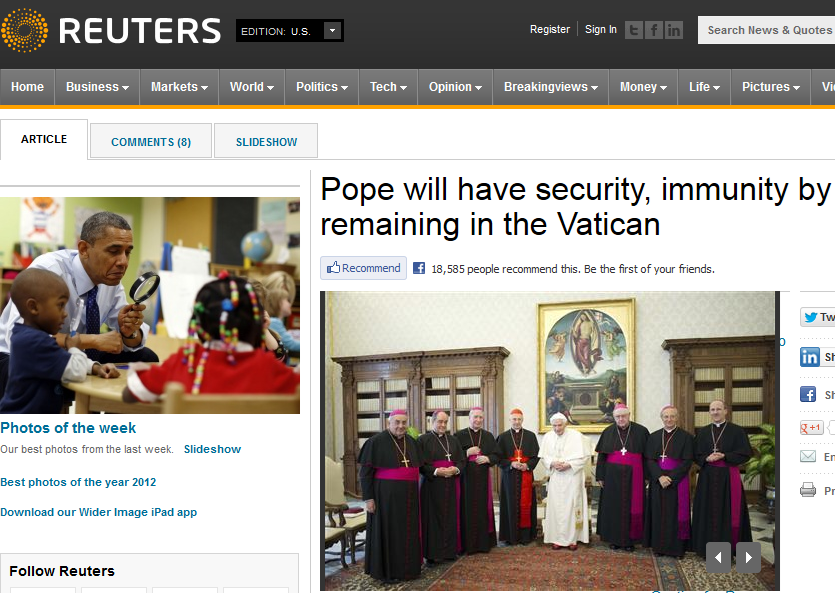 (Reuters) – Pope Benedict’s decision to live in the Vatican after he resigns will provide him with security and privacy. It will also offer legal protection from any attempt to prosecute him in connection with sexual abuse cases around the world, Church sources and legal experts say.

“His continued presence in the Vatican is necessary, otherwise he might be defenseless. He wouldn’t have his immunity, his prerogatives, his security, if he is anywhere else,” said one Vatican official, speaking on condition of anonymity.

“It is absolutely necessary” that he stays in the Vatican, said the source, adding that Benedict should have a “dignified existence” in his remaining years.

Vatican sources said officials had three main considerations in deciding that Benedict should live in a convent in the Vatican after he resigns on February 28.

Vatican police, who already know the pope and his habits, will be able to guarantee his privacy and security and not have to entrust it to a foreign police force, which would be necessary if he moved to another country.

“I see a big problem if he would go anywhere else. I’m thinking in terms of his personal security, his safety. We don’t have a secret service that can devote huge resources (like they do) to ex-presidents,” the official said.

Another consideration was that if the pope did move permanently to another country, living in seclusion in a monastery in his native Germany, for example, the location might become a place of pilgrimage. 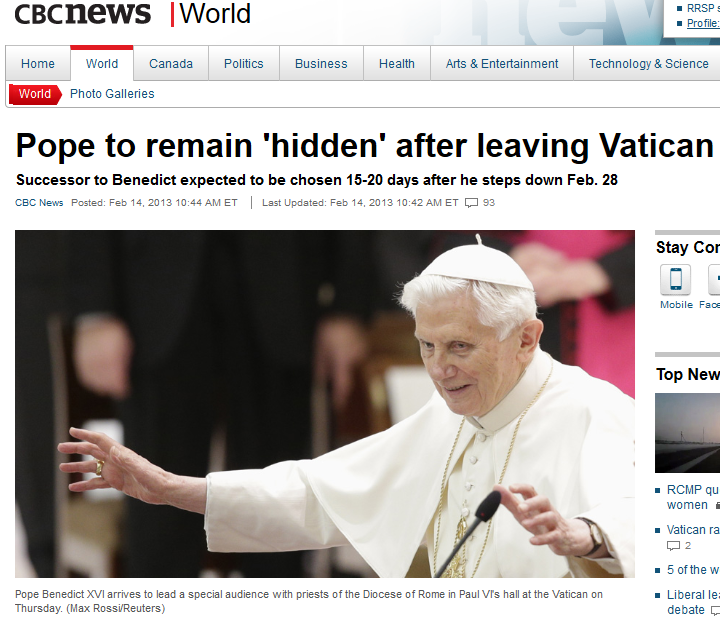 Pope Benedict XVI told priests today he will “remain hidden to the world” after he leaves his post as leader of the Roman Catholic Church at the end of this month.

During a meeting Thursday with priests and clergy of the Diocese of Rome at the Vatican, Benedict said although he was retiring to a life of prayer, “I will always be close to all you and I am sure all of you will be close to me, even though I remain hidden to the world,” Vatican Radio quoted him as saying.

3 thoughts on “Demons Admit Guilt; Pope Will Be Hiding in Hell”