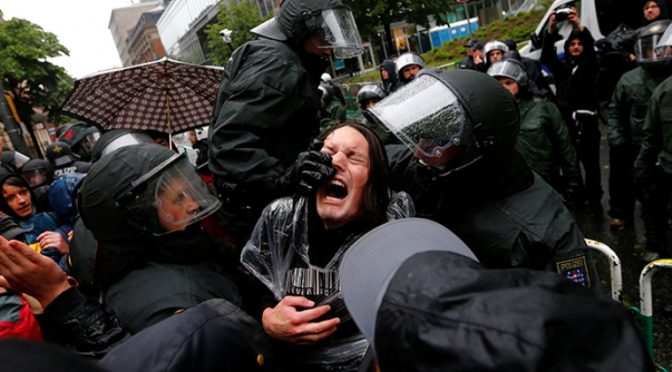 There is an undeniable great divide between the Corporate White House and the Pentagon right now.

The International Tribunal for Crimes of Church and State and its allies are also persistently closing in the Vatican, Inc. itself.

We are indeed seeing major offensives against the Cabal from all fronts.

This one just came in. 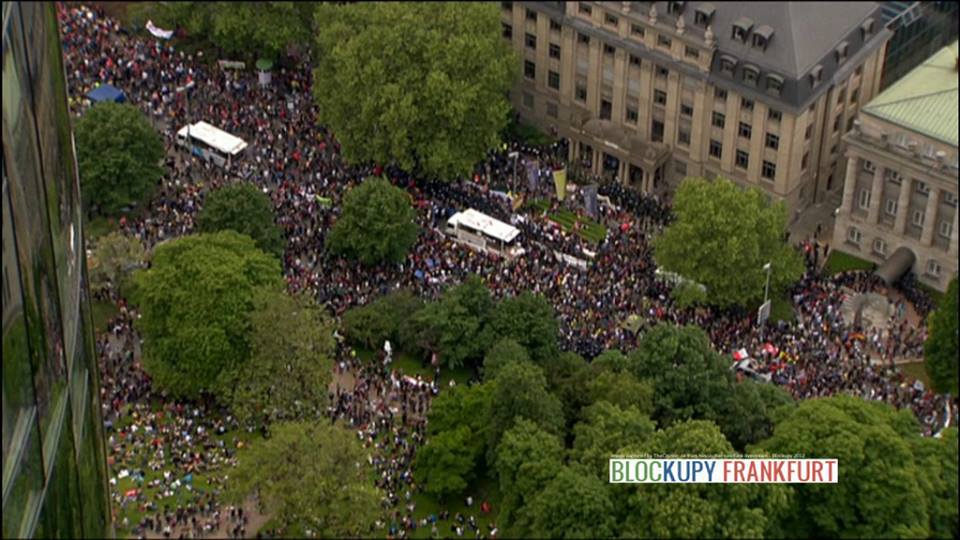 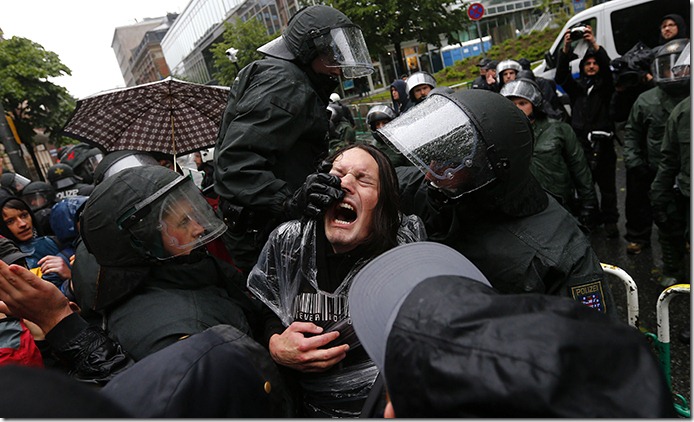 The entrance of the ECB is blocked by over 3,000 ‘Blockupy’ protesters in a march against austerity. ‘Blockupy’ has announced the coalition has “reached its first goal” of the day.

Anti-capitalist protesters have taken to the streets of the financial heart of Frankfurt a day ahead of Europe-wide gatherings planned for June 1 to protest leaders handling of the three-year euro debt crisis.

“We call up everyone to join our protests.” 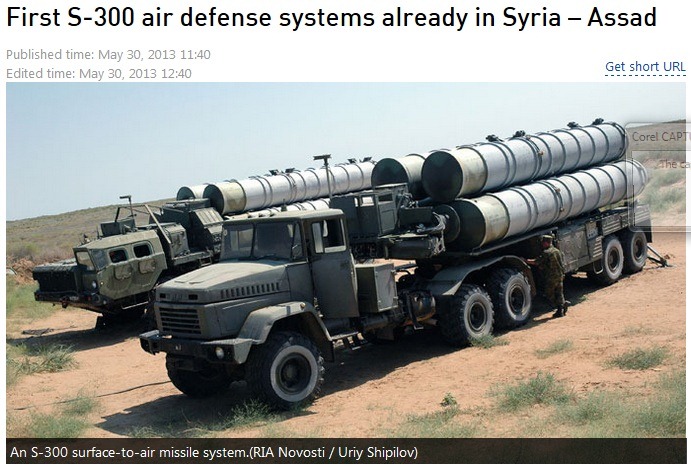 The first batch of S-300 air defense complexes has arrived in Syria, President Bashar Assad said in an interview to Lebanon Al-Manar. Assad also said that Syrian army is battling up to 100,000 foreign mercenaries.

Assad revealed that the rest of the S-300 complexes previewed by a Russian-Syrian arms contract will be coming soon, reports RT Arabic (Rusiya Al Yaum), which has confirmed details of the exclusive interview to be broadcast on the Lebanese TV channel at 9pm local time (18:00 GMT) Thursday.

The president promised that the Syrian army will “immediately react” of a new Israeli aggression of Syrian soil, recalling recent bombings of military objects inside Syrian territory by the Israeli Air Force.

He noted that “The Syrian government will not interfere if some kind of Syrian group starts a war to liberate the Golan Heights,” occupied by Israel since the 1967 War.

During the interview, Assad confirmed the presence of Hezbollah fighters in Syria on the Lebanese border, but stressed, that “it is the Syrian army, not Hezbollah, battling the groups of armed rebels and will continue to do so until total elimination of the terrorists.” 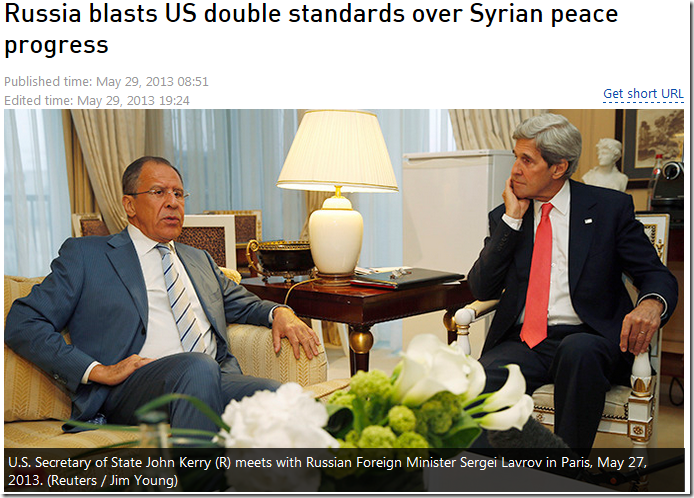 The US-Russian initiative for a comprehensive peace conference to resolve the Syrian crisis needs honest effort of those involved. But some nations apparently try to undermine the effort to call the meeting, says the Russia’s foreign minister.

On Wednesday, the US, Turkey and Qatar pushed through a UN resolution condemning the Syrian government for the alleged use of foreign fighters against rebel forces in the battle for the strategic town of Qusair.
The document calls for an investigation into the matter as well as more aid access and protections for the civilian population of Syria.
The ‘foreign fighters’ in question are from the Lebanese Shia movement, Hezbollah, which backed Syrian president, Bashar Assad, fearing that if his regime falls, Lebanon will become Al-Qaeda’s next target.

The shocking minutes relating to President Putin’s meeting this past week with US Secretary of State John Kerry reveal the Russian leaders “extreme outrage” over the Obama regimes continued protection of global seed and plant bio-genetic giants Syngenta and Monsanto in the face of a growing “bee apocalypse” that the Kremlin warns “will most certainly” lead to world war.

According to these minutes, released in the Kremlin today by the Ministry of Natural Resources and Environment of the Russian Federation (MNRE), Putin was so incensed over the Obama regimes refusal to discuss this grave matter that he refused for three hours to even meet with Kerry, who had traveled to Moscow on a scheduled diplomatic mission, but then relented so as to not cause an even greater rift between these two nations.

The latest international ‘Friends of Syria’ meeting took place in the Iranian capital Tehran on Wednesday, gathering representatives from over 40 countries and international organizations under one roof, to discuss Syria’s future over the course of the day. The motto for the meeting was ‘Political Solution, Regional Stability’. Iran, like Russia, is known as a staunch opponent to any foreign meddling in the Syrian crisis, calling for a diplomatic solution to the current crisis between the government of Bashar Assad and rebel elements. It stresses free and democratic elections and national dialogue. Many have also stressed the importance and benefits of the meeting, including the UN-Arab League Special Envoy on Syria, Lakhdar Brahimi, who said “We should help Syria establish a national government and end people’s sufferings.” A top Iranian foreign ministry official also told reporters that “Today’s consultations can help to the attainment of a political solution to the Syrian crisis, and we hope that these consultations will affect the discussions due to be made in the Geneva conference.” He was referring to the upcoming Geneva conference on Syria, designed to address the above questions and pave the way to ending the bloodshed, which in over two years has claimed some 80,000 lives, according to UN estimates. 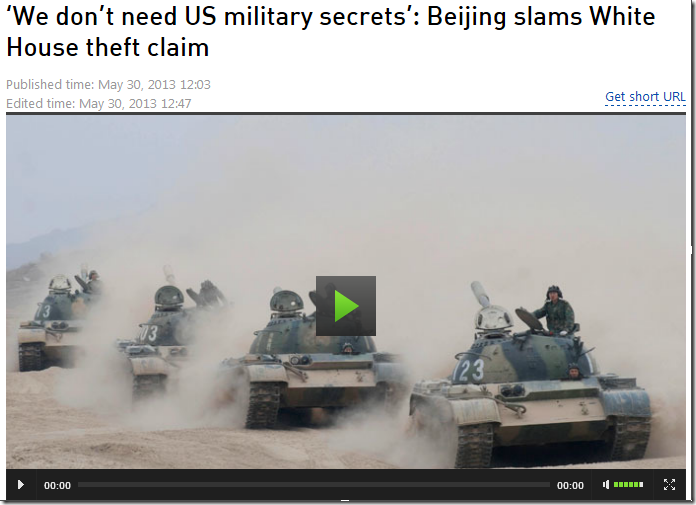 China has dismissed US claims hackers procured blueprints for America’s most advanced weaponry. Beijing stated the allegations underestimate the Chinese people’s intellect and that China is perfectly capable of producing its own weapons.

A US Science Board report leaked this week alleged the Chinese hackers had obtained access to the designs of two dozen major US weapons systems in what amounted to “billions of dollars of combat advantage to China.”

The Washington Post, who saw a copy of the report, intimated that such information could be used by the Chinese government to speed up the development of their military. An unnamed official told the Post that China had saved themselves “25 years of research and development” by stealing the plans.

“It both underestimates the Pentagon’s defensive security abilities and the Chinese people’s intelligence,” said Geng in a news briefing.

(NaturalNews) It has already begun: Japan has just cancelled a large contract to purchase U.S. wheat. “We will refrain from buying western white and feed wheat effective today,” Toru Hisadome, a Japanese farm ministry official in charge of wheat trading, told Reuters.
As many readers well know, I predicted precisely this scenario just yesterday in a Natural News article warning about the consequences of genetic pollution. There, I wrote, “All wheat produced in the United States will now be heavily scrutinized — and possibly even rejected — by other nations that traditionally import U.S. wheat. This obviously has enormous economic implications for U.S. farmers and agriculture.”
Now we’re already seeing the result: the ditching of U.S. wheat by world nations that want nothing to do with GMOs.

Learn more: http://www.naturalnews.com/040572_Japan_GE_wheat_genetic_pollution.html#ixzz2UsMPQFms One of the significant sources of funds for the Cabal is the healthcare industry which registered a whopping $2.7 trillion in 2011, and is projected to soar to $3.6 trillion in 2016, in the US alone. We believe that this is just a conservative figure. You can join the fight against the Dark Cabal and accelerate its demise just by boycotting Big Pharma. You can effectively do this by downloading “Towards Healthcare Emancipation“, a fully illustrated do-it-yourself instructional eBook that will help you in implementing all eClinik methods that would negate the use of expensive medicine, avoid radioactive diagnostics and treatments in completely defeating cancer, AIDS and all other parasitic diseases. These methods, when faithfully followed, work 100% all the time. Find out more about this here. We are very grateful to the following for the love and support they’ve given us for the month of May 2013: