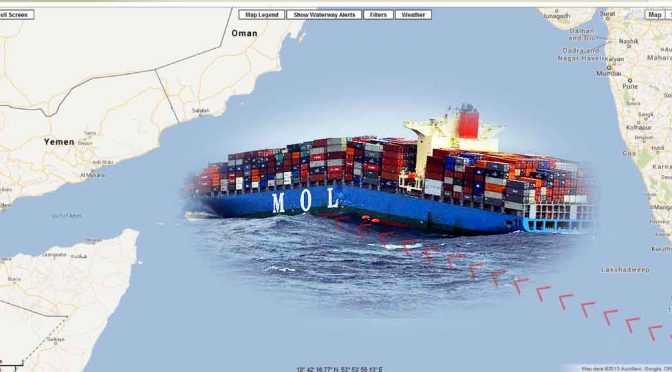 On June 17, 2013, an MOL Comfort said to be carrying arms for the Free Syrian Army, a CIA affiliate,  broke in two which rarely happens except when cargoes are that heavy.

Said container ship is said to be navigating from Singapore to Jeedah, Saudi Arabia. Daily vessel’s itineraries can be found here, and last position received is here.

MOL Comfort is a post-Panamax container ship launched in 2008 and is built to last. 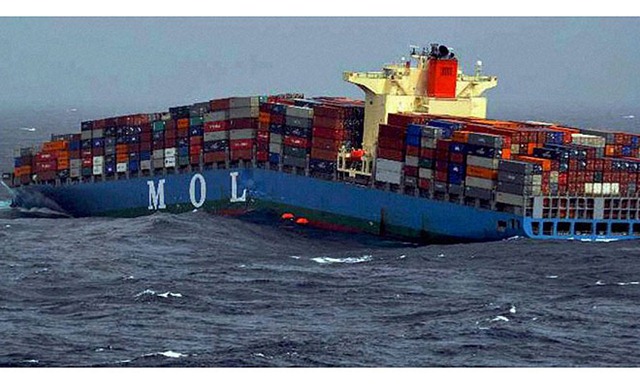 Rescued 26 sailors arrived in Sri Lanka as shown below. Most crew members nowadays are Filipinos, with Magsaysay Shipping in Manila acting its crewing manager. 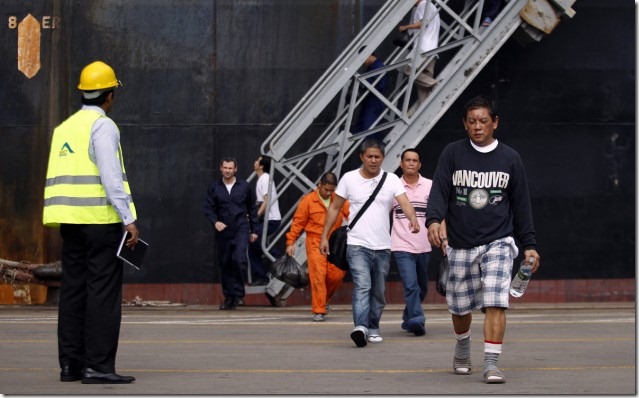 “MOL Comfort sank due to yet unclear causes, en route from Singapore to Jeddah and then to North Europe, leaving behind hundreds of drifting containers and a tremendous aftershock hitting liner sector and all of the maritime industry. Just the scale of the consequences is hard, even impossible, to estimate, not to mention consequences themselves. For all my knowledge, this is the first case in liner sector, when modern ocean-going liner container ship (built in Japan!) sank in the ocean after breaking in two, like a poorly built and managed bulk carrier or over aged coaster. Nothing like this ever happened, and nobody believed it’s possible, even theoretically. It just couldn’t happen, but still, here it is.

At present stage, even the weirdest theories of the cause of the disaster cannot be ignored, something like explosion or several explosions, or whatever else one may fantasize. I for one, would exclude only one version – MOL Comfort surely wasn’t sunk by Somalia pirates.

Putting aside exotic versions, most probable causes which come into mind are some basic design and building faults; serious disbalance of the loaded containers weight due to false cargo weight declarations and faulty cargo plan; faulty ballasting of the vessel. Most probably, if that’s the case, the sinking was caused not by just one of the abovementioned factors, but by their combination, and triggered by rough weather.

If it will be found, that there were several factors involved, then, the questions arise which require sound and unequivocal answers.

1. Are there some basic faults rooted deep inside ocean-going container ships design, construction and management, or was the disaster the result of a combination of negative factors.

2. If it’s a combination of negative factors, what is the probability of such a combination, is it negligibly small, or the odds of another accident are alarmingly high.

3. What’s the cost of lowering those odds, and how will it affect liner business and freight.

The questions of insurance and cargo loss coverage for shippers, especially minor ones, is very important, too.

Let’s not forget another risk quite a number of experts are already worried over – the risk of major fire on a giant ocean-going container ship.

One thing is clear, though. The liner sector, first of all majors, will do whatever it takes to hide unfavorable factors and especially, basic faults, if there are any. The awesome container transportation mechanism they created may not stand serious modifications, called by safety needs.” 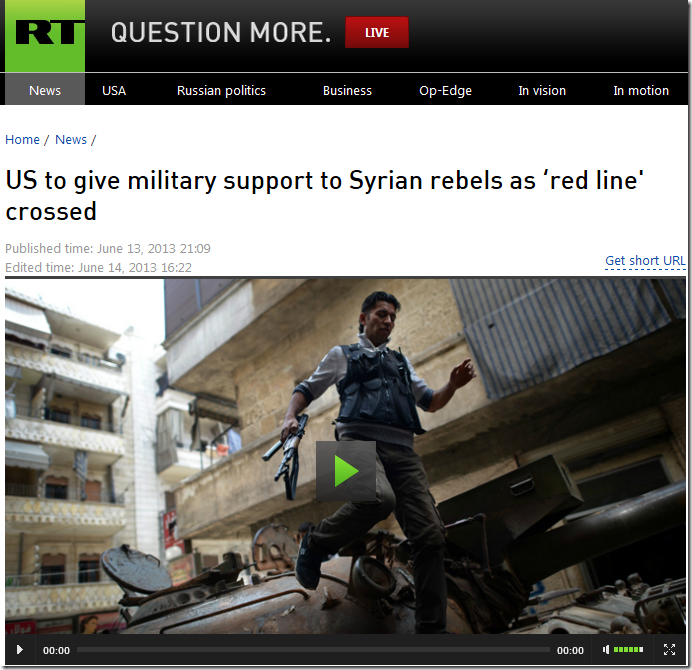 After concluding that the Syrian government has used chemical weapons against the country’s insurgency, thus crossing a ‘red line,’ the Obama administration has decided to start sending arms to anti-Assad rebels for the first time, officials say.

The Obama administration has assessed that chemical weapons, most likely the nerve gas sarin, were used in battle against the Syrian rebels, Deputy National Security Adviser for Strategic Communications Ben Rhodes said in a statement.

The “intelligence community assesses that the Assad regime has used chemical weapons on a small scale against the opposition multiple times in the last year,” he said.

The Syrian Foreign Ministry branded the US statements on the use of chemical weapons a “caravan of lies”.

“The United States, in resorting to a shameful use of pretexts in order allow President Obama’s decision to arm the Syrian opposition, shows that it has flagrant double standards in the way it deals with terrorism,” it said.

Syria had insisted in the past that it did not use its chemical arsenal in the ongoing conflict and would not do so unless invaded by a foreign nation.

President Obama has authorized to release of at least some US arms for Syria’s rebels as part of new military and political aid measures, according to a source who spoke with Reuters. 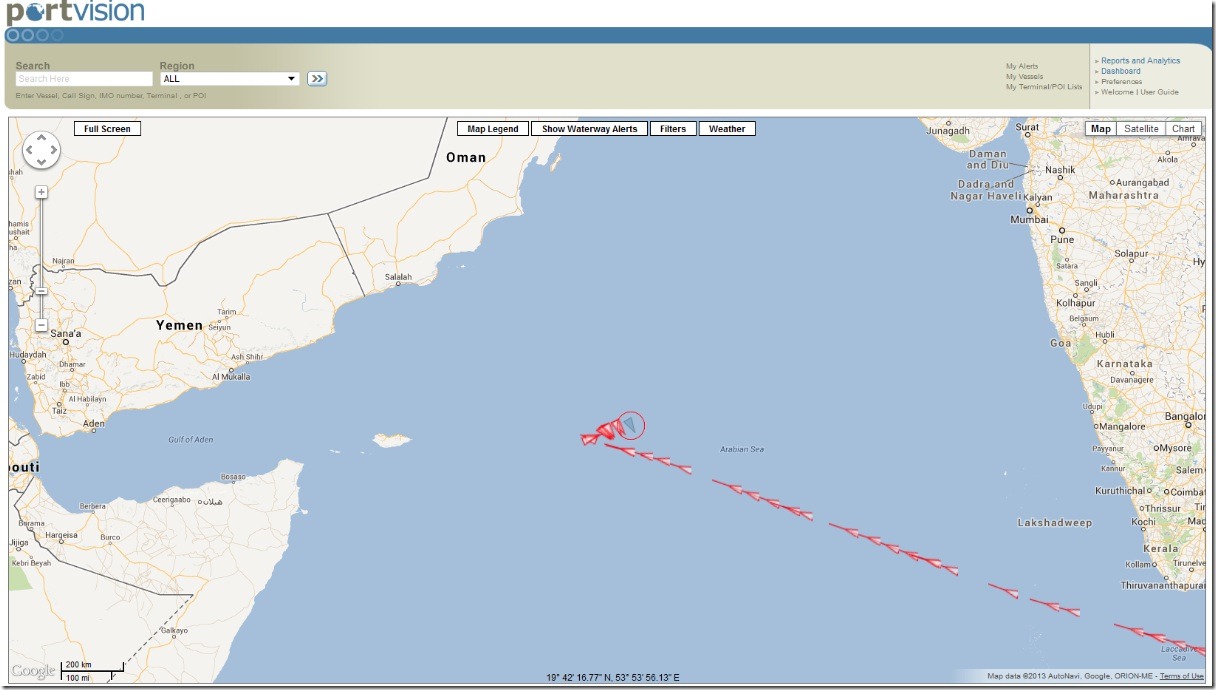