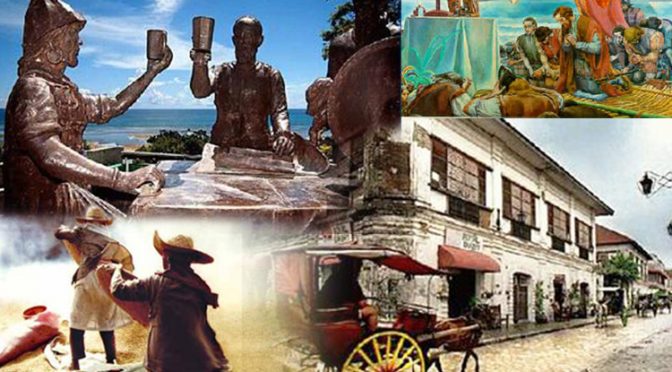 Here’s a gentle treatment of our history. This will be followed by a more in-depth accounts of how we were transformed and treated by those who wrote the history for us.

In the beginning, there were no major problems in the Philippine communities. The early Filipinos had a relatively advanced civilization contemporaneous with that of any ancient civilization. The ancestral land and its natural resources provided facility for cultural exchange through migration as well as trade and commerce, not only among fellow orientals but also among the occidental countries.

The wisest, the strongest, the eldest or the bravest among the tribes or kinship groups conducted the affairs of the community in order to give and share whatever good things they had rather than to get and exploit. The old nobility among the pre-Spanish Filipino shared the land and other resources of the community with the other Filipinos such as the “Timawa” or freemen.

That time the basic political unit of society was the barangay, an informal grouping of several families headed by either a Datu or Lakan who ran the affairs of the entire barangay in much the same manner that he managed his own family affairs. No wonder the barangay was then a one big happy family. It was self-contained and self-reliant. The relationship in the barangay was cordial and cooperative. The barangay was relatively self-sufficient: politically, economically, socially, and religiously. The highest norm of morality was the welfare of the barangay.

Before, the Spanish colonization, the barangays became societies in various levels of transition from the primitive communal state to an Asiatic form of feudalism. The Philippine settlements then were subsistence villages and all the inhabitants were self-sufficient farmers and part-time craftsmen. Spanish colonialism arrested the natural development of the native communities but it also laid the basis for a unification of the archipelago.

The king of Spain, as a reward to the colonizers for their services to the crown were given possession and jurisdiction over large tracts of land and its inhabitants. This was the Encomienda System. The old Filipino nobilities who cooperated with the encomiendero were reduced to the status of “cabeza de barangay” while the timawa or freemen became “tenants”. Thus the landlord-tenant relationship or “kasamahan” was born.

The Bonapartian principle of “divide and conquer” imposed by the Spaniards to divide the Filipinos psychologically and thus unite them politically made them small-group oriented with a tayo-tayo (just we) or kanya-kanya (to each his own) attitude.

Since there was no security in the Spanish Government, the Filipinos started to regard other groups outside their families with caution, suspicion and influence. Imitating Spanish colonizers, they sought political public office not anymore to give but to enhance their families’ welfare. The main pre-occupation became their family survival (makaraos) and how to go through (lusot), no matter at whose expense. The colonial experience of the Filipino of Western structures did not give them security, They have made him find nothing but insecurity outside his family. With the erosion of the cooperative values of the pre-Spanish Filipino, the rich became richer and the poor simply got poorer.The poor Filipinos became victims of the Western credit practices of “Pacto de Retroventa”, sangla-bili and usury.

The American era in the Philippines was characterized by the desire to expand American trade, using the Philippines as the springboard to Asia. The Payne-Aldrich Act of 1901, the Underground Trade Act of 1913, the Tydings-Kocial Kowski Act and Bell Trade Act were all aimed at enhancing the American benefits at the expense of the Filipinos. The Philippines became free politically in 1946 and yet is not free economically. The country became a “consumer society” for Western goods and ideas. The coming of American multinationals discouraged some local entrepreneurship. Other evil effects of American influences in the Philippines are the following:

The Japanese regime in the Philippines was no less evil than the last two past colonizers. Under the pretext of building an Asian Co-prosperity sphere in Asia, they imposed their systems on the Filipinos with force and brutality.

The Colonial period was the beginning of major problems in the Philippines. some of these major problems which until now remain unresolved are the following:

In the past colonial period, the barangay system was revived as the primary unit of government but not to its pristine and original values, aims and status. This is the big challenge to community developers:

how to restore the original values, aims and status of each barangay,
how to motivate people to become self-sufficient, self-reliant, cooperative, and willing to share their lands,
how to train leaders who are the best, wisest, strongest and bravest in the community, those whose intentions will be to give rather than to get benefits for themselves as their primary motive.

Characteristics of the Filipino Community

Its aims, goals, and aspirations are characterized by the values of:

Its beliefs and convictions are:

Its norm and principles are:

One thought on “The De-Evolution of Philippine Society”