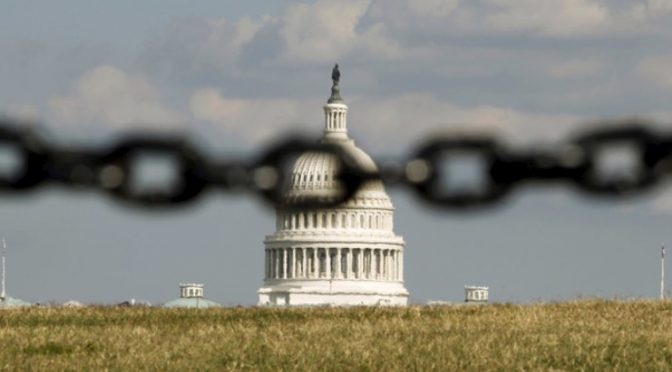 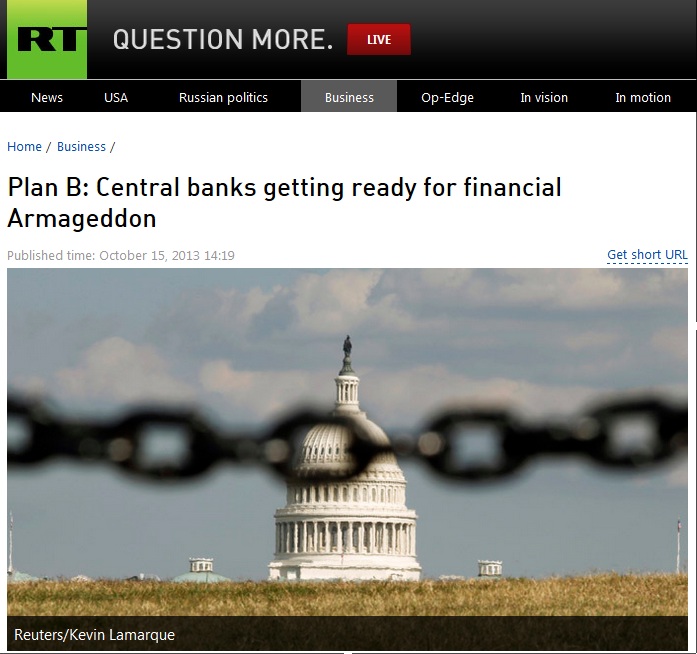 If the US debt-ceiling debate goes past the eleventh hour, and the default of the world’s largest economy becomes a reality, leading central banks around the world are gearing up to minimize losses and keep the world economy functioning.

Follow RT’s LIVE UPDATES on the US budget crisis

If US lawmakers don’t reach a budget consensus and raise the debt ceiling by Thursday October 17, the US will become the first Western power to default since Nazi Germany in 1933, and will send markets into uncharted territory.

The rest of the world is bracing itself for what would happen if the bill is rejected, and the US inches closer to defaulting on its debts, which are largely foreign- held in the form of US Treasury Bonds.

Central banks have begun preparing for the worst-case scenario if US does fault, which would result in a serious devaluation of Treasury bonds, delayed payments, and a more large-scale version of the current government shutdown.

“Because in the past it’s always been sorted out is absolutely not a reason to fail to do the contingency planning,” Jon Cunliffe, who will become the Bank of England’s deputy governor for financial stability in November, told UK lawmakers.

“I would expect the Bank of England to be planning for it [US default]. I’d expect private-sector actors to be doing that, and in other countries as well,” said Cunliffe, who acknowledged a default as “the main risk to the [global] financial system”.

The European Central Bank and the People’s Bank of China (PBC) have struck a deal that moves both banks farther from the dollar orbit. The two banks agreed to ‘swap’ $56 billion worth of yuan for $60.8 billion worth of euros.

Many central banks have reserves in the form of Sovereign Wealth Funds, which are also at risk if the US defaults, as many of the assets are held in dollars. These investment vehicles could be crippled by a default. China’s is estimated at more than $1.3 trillion – the world’s largest.

Neil Mackinnon, a former UK Treasury official, told RT the US default tango marks a shift in the global economic paradigm, from West to East.

If the US doesn’t act soon, “the dollar will decline and its importance will move to a multi-polar currency system and other currencies will take on board more importance,” said Mackinnon.

Over the weekend, economic leaders from around the world met in Washington DC at the International Monetary Fund’s annual meeting. The fund’s managing director, Christine LaGarde, issued a harsh warning the global financial system could enter a recession if the US misses its debt deadline.

The US Senate said they will announce a deal to end the shutdown and extend the debt ceiling on Tuesday, which will pass through to the House, where it will face Obama’s hard-nosed Republican opponents who want to cut funding of the Affordable Care Act.

Senate Majority Leader Harry Reid, a Democrat, said Tuesday has the potential to be a “bright day” and bring calm back to the global markets.

Senate Nears Deal… GOP Rep: Boehner Will Be Lucky To Find 20 Republicans To Support It… House Conservatives Revolt… ‘Mushy Piece Of S–t’… ‘If Boehner Backs This, He’s In Trouble’… House To Vote On Their Own Bill – And Still May Not Have The Votes!… THE DEFAULT HAS ALREADY BEGUN…

One thought on “Central Banks on Armageddon Alert”