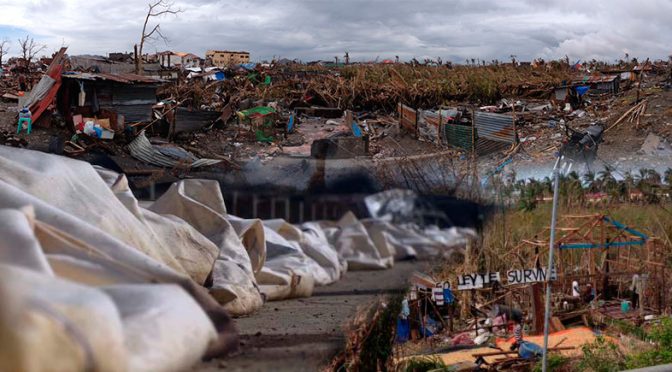 Sustained winds of 315 kph at the first land fall, what could be natural with that?

The world may know by now the extent of the damage left by typhoon Hainan or Yolanda on the people of the Visayas region in the Philippines. But the underlying issues will only be clearer after some time.

US want easier access to the country much like they have when they still had their military base before 1992. They sent three congressmen to arrange for that privilege using the tragedy and their “unprecedented relief effort” as the fulcrum.

And it is not what those planes and warships are unloading on their way into the disaster area. But it is what they will be bringing with them on their way out. They’ve done this before.

As every regular visitors of this blog would know, the Cabal is extremely desperate in preventing the US, Inc. collapse and the eventual demise of the whole Satanic Empire.

Russia, for her part, is moving for a ban on the US dollar saying it’s part of a “Ponzi” scheme.

They are very busy scouring heaven and earth for hard currencies to keep it afloat. And they have decided to check on their “bank deposits” in the tropics using death and destruction.

The U.S. military’s Sea-Based X-Band Radar (SBX-1) was ordered to set sail out of its berth in Hawaii on March 23, 2013 on what the United States Department of Defense (DoD) claims to be routine sea trials.  However in light of recent events in the Philippines – typhoon Haiyan – microwave data from the devastated region gives evidence that the SBX-1 was ordered deployed by the U.S. government (Barack Obama) to the Pacific to complement other U.S. military controlled steerable phased array radar systems (HAARP)  in Japan to wage war against the Philippines using HAARP’s weather modification capabilities.  The SBX-1 was deployed for geopolitical purposes.  As a U.S. military controlled weapon of mass destruction – an act of war.

The SBX-1’s active electronically scanned array (AESA) radar is mounted on a Russian-built fifth generation CS-50 twin-hulled semi-submersible drilling rig designed to function in the type of adverse conditions often encountered in ocean operations.  The SBX-1 was built for 1 purpose – weather modification which was revealed in the U.S. Air Force report titled “Weather as a Force Multiplier: Owning the Weather in 2025” (link is to pdf file on U.S. Air Force website).  The HAARP SBX-1 sea-based platform complies with a directive from the chief of staff of the U.S. Air Force to build upon weather modifying concepts, capabilities, and technologies that the United States can use to remain the dominant air and space force in the future. Presented on 17 June 1996, this report was produced in the Department of Defense school environment of academic freedom and in the interest of advancing weather modifying weaponry related to national defense and geopolitical purposes. The U.S. weather weapon of mass destruction system called HAARP has been fully operational since Hurricane Katrina – 30 years ahead of schedule.

The SBX-1 and the land based systems are all part of the US Missile Defense Agency’s (MDA) Ground-based Midcourse Defense (GMD) project and performs a vital role in the Ballistic Missile Defense System (BMDS).  The SBX-1, the land based systems and the orbital X-37B are all illegal weapons of mass destruction.  All are banned by under the “Environmental Modification Convention (ENMOD)” treaty – an international treaty prohibiting the military or other hostile use of environmental modification techniques having widespread, long-lasting or severe effects. It opened for signature on 18 May 1977 in Geneva and entered into force on 5 October 1978.

A NEED TO UPGRADE THE DELIVERY OF ALTERNATIVE INFORMATION

Most of my countrymen don’t understand what really hit them. They don’t have the faintest idea that some technologies do exist to manipulate the weather as a weapon of mass destruction, and we ain’t seeing nothing yet what these technologies are capable of.

Weeks of forced silence have afforded us to think deeper into how we can modify our approach to counter the still active mainstream soap opera.

There’s a need to accelerate the delivery of alternative information to the common folks. We need equipment like projectors and public address system so we can show and explain to them what this is all about.

An AM/FM broadcast system would also be a very good idea.

We need grassroots level alternative information drive as not everyone here have internet access. We have the information material and the courage to do this. But we don’t have the basic equipment.

This is where you can come in. Rest assured we will be transparent with this as we have always been.

The only way we can effectively defeat the Jesuits is to expose them who they really are.

Download Vatican Assassins by Eric J. Phelps through this link.

Thanks to all those who were checking on us prior and in the aftermath of the worst typhoon in history. Thanks to Gail E, John G, Steve K, Tom H, and Magnus N, and everyone who have my country in their thoughts and consciousness in our time of need.

We really appreciate all the assistance my countrymen-victims received.

It’s very clear from the article below about what the US really wants from the Philippines. They want a sizable control and influence over our internal affairs. Our failure to cooperate with the US would result to unrest and assassination of government officials, no matter who’s in charge there. 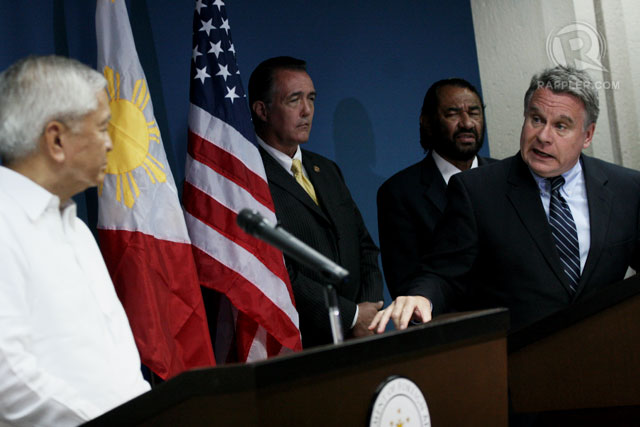 WORKING TOGETHER. Foreign Affairs Secretary Albert Del Rosario (left) listens to New Jersey Congressman Chris Smith during the joint press debriefing tackling the efforts of U.S. Congressmen in helping the victims of Super Typhoon Yolanda. Congressman Smith promised that they will talk to the U.S. Congress to extend more help to the displaced victims of the Super Typhoon. With them are US Congressmen Al Green and Trent Franks. Photo by Rappler/Jose Del

MANILA, Philippines – Foreign assistance that has helped speed up relief and rescue operations in the aftermath of Typhoon Yolanda (Haiyan) has “demonstrated” the need to allow increased rotational presence of American troops in the country, Foreign Affairs Secretary Albert del Rosario said on Monday, November 22.

Allowing increased troop visits – to improve humanitarian assistance and faster disaster response – is part of the framework agreement that the Philippines and the United States are working out.

“It accentuates the main purposes of the framework which is to make humanitarian assistance and disaster relief and response a very major aspect of the agreement,” Del Rosario said during a press briefing with 3 US congressmen who are here to coordinate US assistance to the typhoon-ravaged areas.

Arizona Representative Trent Franks assured the Philippines of America’s commitment, saying that it is better for the Philippines and US military forces to stick together.

“We certainly not only have great common potential opponents to deal with, but we have a great commitment to being in common in going forward in peace efforts,” Franks said.

The proposed deal would allow more US troops, aircraft and ships to pass through the Philippines at a time when Washington is refocusing its attention on Asia.

That is the prime motivation of the US geoweapon attack on the Philippines, and we can assure everyone that we understand exactly how this machine works.

This massive storm originally began its rotation , was born out of a microwave anomaly in the West Pacific. This video discusses the findings, and possible origin of the microwave pulse. Coming from where???! US Airforce base near the location, the base is a satellite communications hub.

The MIMIC/SSEC images discussed can be found here:

Climate viewer can be used here:

MUST SEE page of all works found regarding weather modification — everything found by each researcher assembled here in an easy to decipher format!! thanks to Jim Lee (R3zn8D)

Earthquake beneath Japans Typhoons Francisco and Lekima as they passed over … greater than 7.0M :

Earthquake beneath Taiwan / Philippines typhoon Krosa as it passed over… greater than 7.0M :

This has happened before, Storm control via microwave pulse .. seen during other Hurricanes such as “Sandy / Frankenstorm”, Hurricane Irene, and Chantal.

The Weather Channel covers the topic of storms created via Microwaves:

US Navy creates plasma in the atmosphere using HF:

2013 cloud seeding results from Kansas (just one of many states reporting):

Finally, here is a very long post (2 very long pages) , that should take a few months to go over… regarding weather modification: