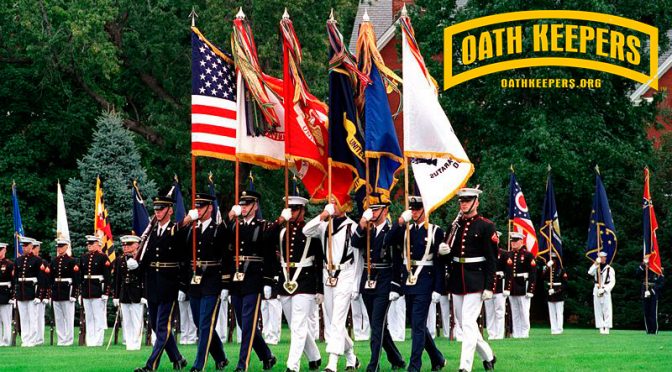 In preparation for the formal admission of the collapse of the US dollar and possible proclamation of Martial Law to contain dissent, OathKeepers from different services of the US Military decided to form Special Forces “A Teams” to assist the militia and the community against Federal Tyranny.

Bear in mind, the collapse of the dollar, which is highlighted below as the trigger, is inevitable. In fact, it is what caused the B-52 bomber intrusion into the newly declared sovereign Chinese airspace.

Oath Keepers is instructing its 30,000 members nation-wide to form up special teams and sub-teams in each Oath Keepers chapter, at the town and county level, modeled loosely on the Special Forces “A Team” (Operational Detachment A ) model, and for a similar purpose: to be both a potential operational unit for community security and support during crisis, but also, as mission #1, to serve as training and leadership cadre, to assist in organizing neighborhood watches, organizing veterans halls to provide community civil defense, forming County Sheriff Posses, strengthening existing CERT, volunteer fire, search-and-rescue, reserve deputy systems, etc., and eventually to assist in forming and training town and county militias (established by official act of town and county elected representatives). We want our chapters to organize themselves as a working model that we can then take to other veterans organizations, such as the VFW, American Legion, Marine Corps League, etc. in each town and help them establish such teams within their already existing veterans halls.  And likewise, to serve as a model and training cadre to help churches, neighborhood watches, and any other civic organization organize.

We are basing this on the Special Forces model, which has a twelve man “A team” of specially trained soldiers who are inserted into a community to train and lead that community in resistance to oppressive regimes (hence their motto: “De Oppresso Liber).   SF’s primary mission is to teach, organize, and lead, rather than to directly fight. They can fight, of course, but they are most dangerous as a force-multiplier by helping an entire community to fight. We will do the same – be force multipliers to help prepare communities so they can preserve civilization by providing their own security, disaster relief, infrastructure preservation, emergency communications, strategic food reserve, and medical care.

In an SF team, there are:

An Assistant Operations NCO who also does intelligence.

WHY WE ARE DOING THIS:

In addition to this being part of our mission anyway, we feel like we are flat running out of time and we need to get as prepared as possible as fast as possible. The Oath Keepers national Board of Directors war-gamed what we think is the most likely move by our enemies to scrap the Constitution. On the BOD at the time were a Special Forces Major, an Army Ranger, and a Marine Scout-sniper veteran, as well as a retired Navy Commander and several Vietnam combat vets, and several other combat arms veterans. Playing devil’s advocate, and putting themselves in the enemy’s shoes, we estimated that the most effective course for “them” to follow would be to:

1. Intentionally trigger a catastrophic economic collapse as an economic “neutron bomb” (kills the people, but leaves the land intact). With the current intentional lack of a Strategic Grain Reserve, our population is in a strategic “checkmate” position where an economic collapse could be a near-extinction event for our population. During the Cold War, the U.S. government maintained three years worth of grain in a Strategic Grain Reserve for the entire US population because they knew that in the wake of a nuclear exchange with the Soviet Union, it could take three years to recover and grow crops again. Without that reserve, those who survived the exchange would starve to death before they could possibly restart growing enough food. We now have no such Strategic food reserve, which means that any catastrophic interruption in food delivery could kill millions of Americans. Such a disruption could occur because of even a limited nuclear exchange, an EMP strike (either man-made, or natural, as a result of solar activity), or, an economic collapse.

Currently, our economy is in such a weak state that an economic collapse could be intentionally triggered at any time. Because of the lack of a food reserve, and because few Americans store food on their own, such a collapse would lead to mass starvation, just like in the aftermath of a nuclear exchange.

The US government is spending billions of dollars on ammunition, armored vehicles, and weapons for DHS and local police. It is spending nothing on food for the people. They are preparing to control and contain us, and to shoot us, but not preparing to feed us. Why is that?  You know the answer.

2. Let the country descend into chaos. A national economic collapse would be like a “national Katrina” but lasting far longer, and because it is nation-wide, it would be far more intense. The cities would implode. All the government would have to do is contain them and let them implode. in the midst of that chaos, they could also do a decapitation strike on the leaders of the liberty movement, but other than that, “They” could just sit back and wait a month, two months, or three to be really sure the people are at a maximum level of starvation, weakness, and chaos, and then:

3. Ride in like the cavalry, to “save” us by means of martial law and scrapping our constitution once-and-for all. They could blame the collapse on the so-called “free market” and on not having enough government power, and they could blame delays in relief on the “extremists” in the patriot movement (i.e. “we would have gotten the food trucks in sooner, but the extremists were ambushing our safety check-points and resisting the necessary relocation to relief camps”). Their ready to go solution would be a world-wide version of the Fed, and scrapping what’s left of the Constitution.  People would be told to “just turn in your guns, and you’ll get food” and “just turn in the extremists, and you’ll get food.”

ADDITIONAL ANALYSIS: To the above, we now add Brandon Smith’s insight that with a war in Syria, the elites can trigger an economic collapse with a war – with Russia and China using economics as a weapon in retaliation. All China would have to do is dump US treasuries and refuse to trade with US dollars. That would begin the final death-spiral of the dollar.

The Chinese would be blamed for the collapse, rather than the banksters. “They” would tell the American people that the evil Chinese are to blame for the death of the dollar, and anyone who resists the “emergency measures” by the US government would be accused of aiding the enemy. They would say “domestic extremists took advantage of the Chinese economic attack on us to push their own racist and extremist anti-government agenda, making the collapse worse by attacking peace-keepers and international relief volunteers, and by attacking and resisting US officials who were trying to restore law and order.”

It is because of the systemic weakness of the American people, and our strategic checkmate position of having no strategic food storage and no effective local security, that we feel the need to take Oath Keepers operational and put our focus on each chapter being a training cadre to get their communities as prepared and organized as possible in whatever time we have left.

We urge you to presume the worst in the short term, and to work in three or four month sprints – assume that a collapse will be triggered this fall/winter and do all you can to get yourselves and your communities ready.

If it doesn’t happen in the next four months, then do another sprint, of three or four more months of preparation. And keep going until it happens – which it will eventually, no matter what anyone does. The dollar is doomed.