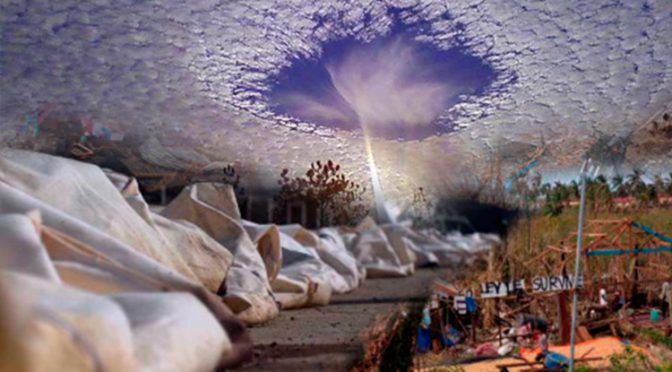 In response to the covert war waged by the United States, Inc. against my countrymen, we are starting to publish videos, distribute them locally, which would help them understand what is really going on.
Considering the deeply rooted Catholic religion among 95% of the population, i.e. nearly 400 years of brainwashing, they may have a hard time accepting these facts.

But it is far better confronting the hard and inconvenient facts now rather than deny the truth about why so many have lost their loved ones, so that the perpetrators will know that the next time they inflict the same atrocities a potential retaliation of any form feasible can be expected.
[youtube=http://youtu.be/hEVAJUQQ8oM]
Description:
The economic power has shifted back to Asia, and the Western Cabal is doing what it can to keep itself afloat, i.e. outright extortion and intimidation using exotic military technologies including the use of HAARP weather and geological manipulation capabilities.
All technological advantage was made possible through the misappropriation of the borrowed and /or stolen Asian Treasures known as the Collateral Accounts.
Indonesia, Thailand and the Philippines are at the epicenter of a semi-covert global financial war. Japan’s Imperial Army decided to bury the Golden Lily loot in varying proportions among these countries during the last days of WW2.
Mainstream Media, e.g. CNN, BBC, Reuters, are owned and controlled by the same Bilderbergers who control global banking, military industrial complex, pharmaceuticals and pesticides, industrialized food production, etc. It would be unwise for them to tell you all about the heinous crimes they have committed. They control what you know, and how you behave. The Bilderberg is just one of the many tentacles of the whole Illuminati structure.
The ongoing World War Three [WW3] is being fought in many fronts:
1. Finance. The ultimate control of hard currencies, e.g. gold, silver, platinum, are being fought with heavy high-profiled casualties, i.e. pontifical resignation, bank CEO mass resignations, bankers’ suicides and assassinations, bank deposit sequestrations in Cyprus and EU in a few days.
2. Agriculture. The continued manipulations of the weather have resulted to reduced agricultural production, and overall economic distortions worldwide. Natural farmers are being labeled as terrorists, while the GMO pushers are heralded by their media as the genius behind the endless war to end global hunger.
3. Energy. Cold fusion and electrogravitics continue to make headways into the mainstream mindset, yet the drilling and fracking for oil continue Long term fossil based energy projects are still being discussed in corporate boardrooms and vacation hotspots like Davos.
4. Medical. There is an ongoing effort by medical activists, and other organizations, to relegalize the use of marijuana for medical and industrial purposes. Chemical manufacturers and peddlers continue to supply deadly vaccines, chemo, fluoride, mercury, etc.
5. Military. The ongoing unrest in Syria and Ukraine instigated by CIA covert operatives including Al Qaeda, have held these countries progress in hostage, and its people to become refugees.
6. Media. The people have awakened to the poorly scripted stories of regular news networks, they are beginning to seek and share their own research on every subject that really matters. The alternative media is getting bigger by the minute and seems unstoppable. Only the lazy Sheeples are still glued on to CNN and its cousins.
We can only show you the door, but it is up to you to open it.
Please support us by downloading our Second Edition of Towards Healthcare Emancipation, a fully illustrated eBook about how you can implement a low cost but extensive and highly effective healthcare system in the comfort of your own home.
The proceeds from this book will be used to fund our next project, Towards Energy Emancipation.
The aim is to make the subject of free energy more understandable for the layman so that anybody could replicate and install his own power plant and be completely living off-grid.
If you haven’t done so, please like our FB page to encourage others to learn more about our work.
Thank you very much for your valuable support.
–