This is the latest from the Keenan Group…

February 23, 2014 / Keenan Team
The Globalists’ New World Order train has long-tried to leave the station, but The People of the United States just stubbornly refuse to get on board.  And now the Globalists are preparing to punish the People of The United States through the fire sale and liquidation of her territories, assets, property and rights, as well as the significant and imminent devaluation of the US dollar, hatched at the February G20 meeting in Australia of corporate criminals masquerading as heads of state.
The Globalists are on their heels, cornered and scared, losing control – and that’s a dangerous position for these misanthropic animals.  Our property, assets and human rights are not the only thing they are moving to liquidate!

THE STATES ARE IN OPEN REVOLUTION AGAINST FEDERAL TYRANNY!

You will not hear a peep about it in on the Globalists’ multinational corporate controlled mass media. State legislatures are boiling with laws rejecting and reversing the Federal tyranny within their territories.  Currently the States having  passed or are in the process of passing legislation are:

The Globalists have hit the American people with a constant barrage of false flag mass shootings by mind controlled freaks, and have run a false flag hoax of an elementary school mass shooting, expecting that the American people would surrender their arms and just roll over in the face of THE GREAT FED GUN GRAB.  The strategy worked for them in the UK and Australia.  It backfired in the US, where our founding fathers instilled into the American psyche the value of a loaded gun in one hand, and the throat of an out of control FED in the other.  When the FEDs thought they had the American people softened up with their false flag blood and violence, they started passing their laws to disarm the American people.  But the American people started arming themselves to the teeth, by historical and record numbers, in advance of every attempt to disarm them, intuiting the out-of-control FED threat.  (See here, here, and here.)
The Globalists have a battle to the death on their hands.  And they made their move at the Australian G20 meeting in February.  They are attempting to fire sale the territories, property rights, and assets of the American People to satisfy the massive incompetence of the private banking cartel of The Federal Reserve Bank and their multinational corporate co-conspirators.
They have a problem.  The wealth and treasure of the American people do not belong to them, and they cannot liquidate it to save their ass.  Any attempt to wholesale American wealth, property and treasure is a scam which will have no force, and WILL NOT STAND.
We’re fighting back.  They’re playing dirty.
Below is a Cease and Desist Demand.  We’re putting the Globalists on notice that their farce is known; and the whole world now knows, and is watching.
Join the fight.  Find out what your state is doing to resist Federal tyranny.  If out-of-control FED legislation is pending in your state, aggressively support it.  If it’s not, demand it.  The Tenth Amendment Center is a good resource of these efforts in the States. 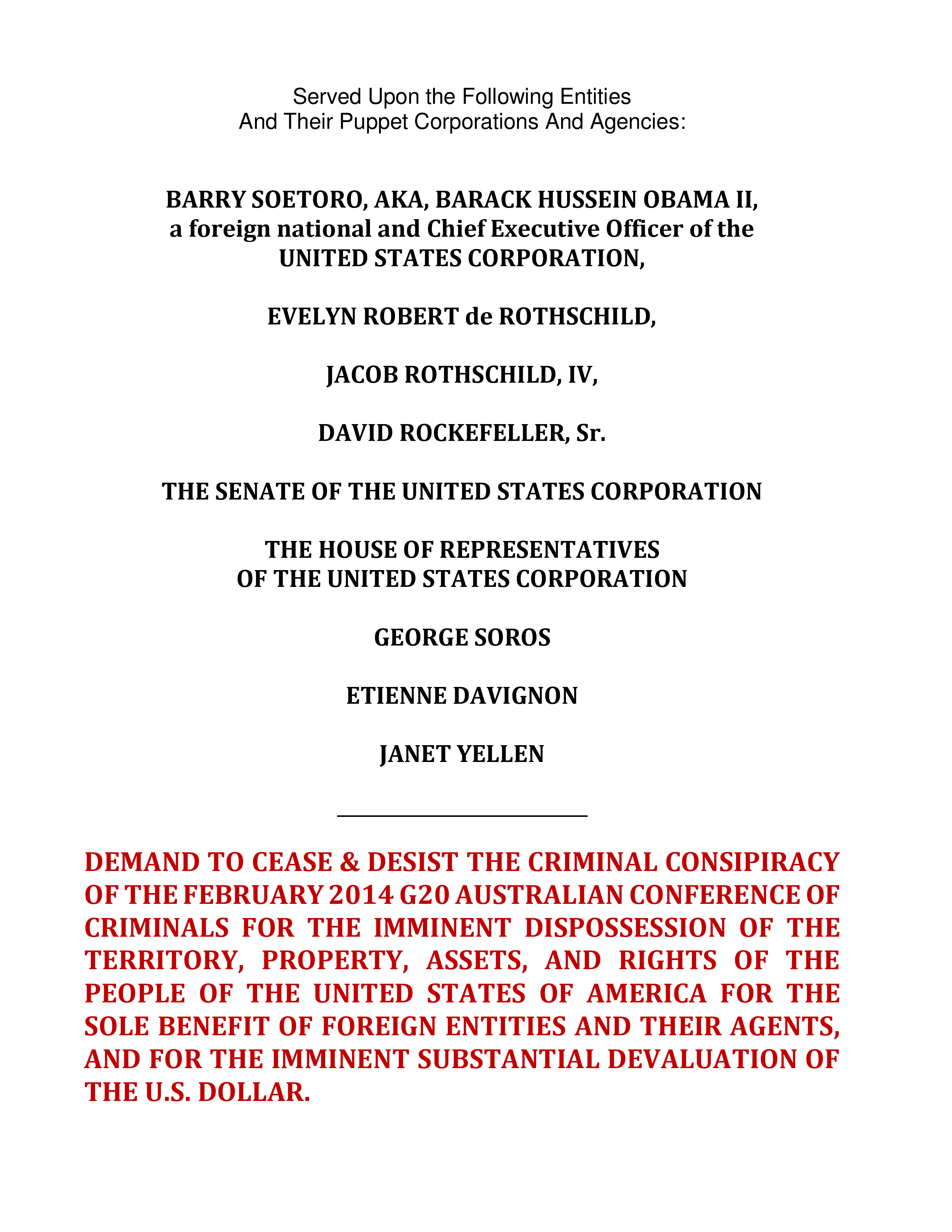 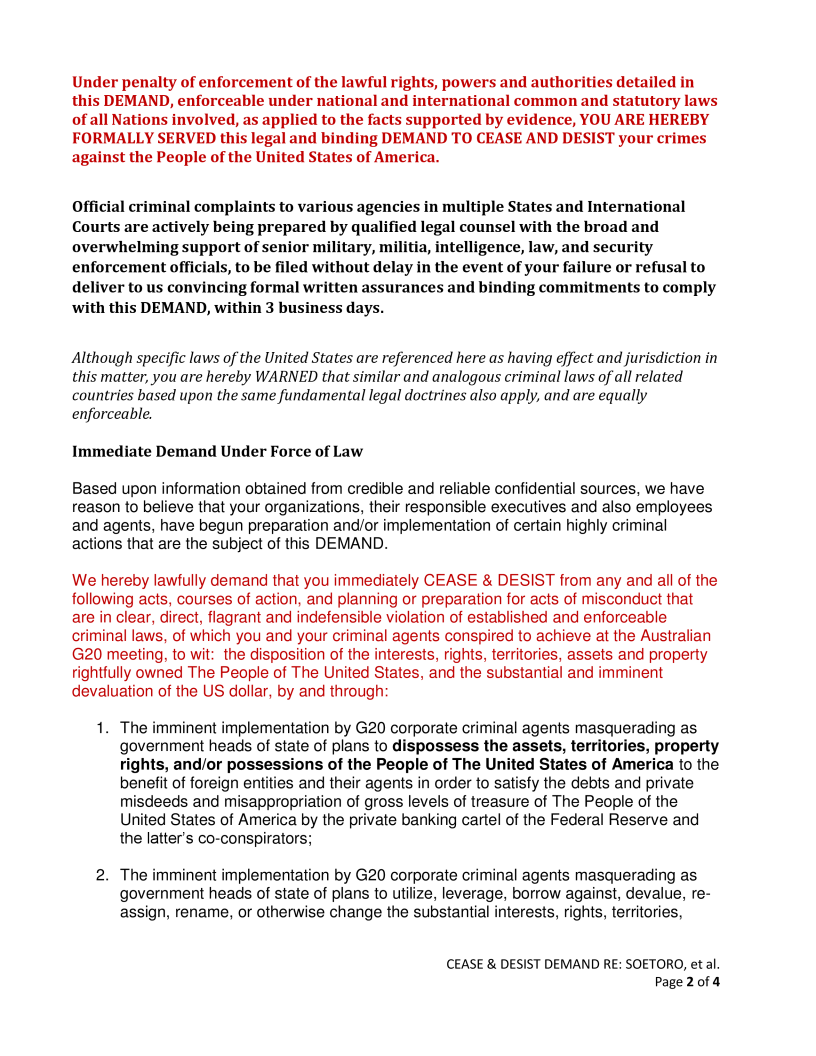 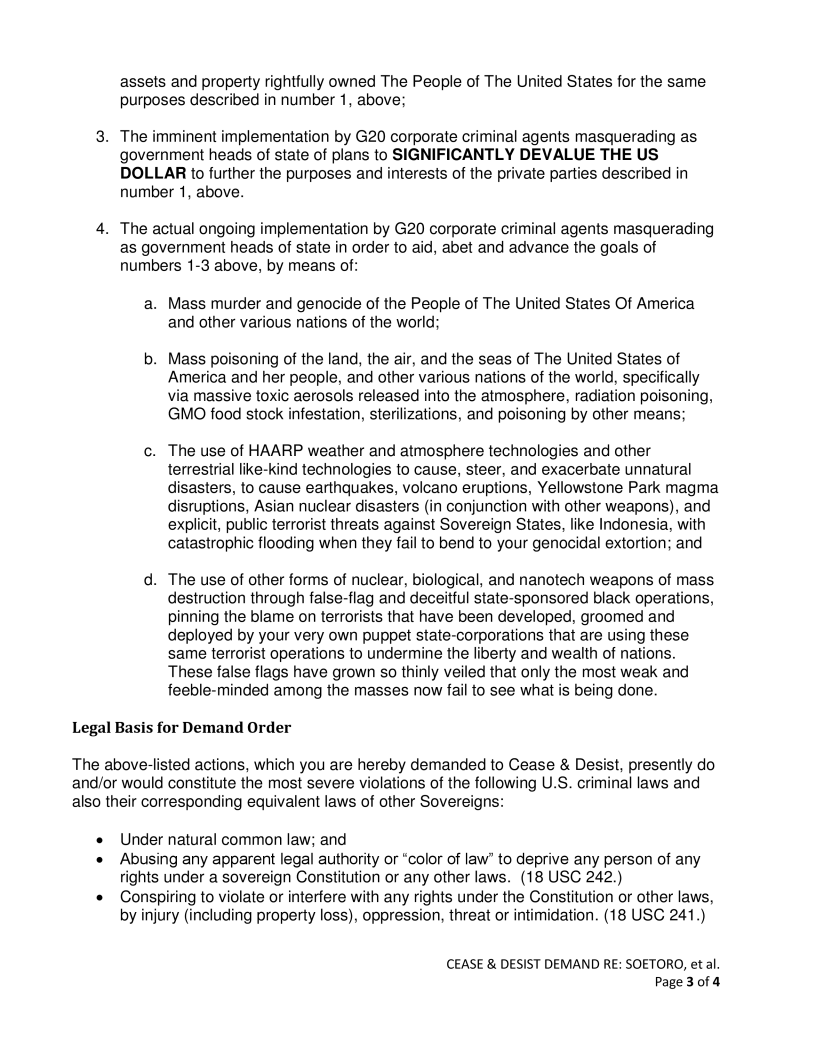 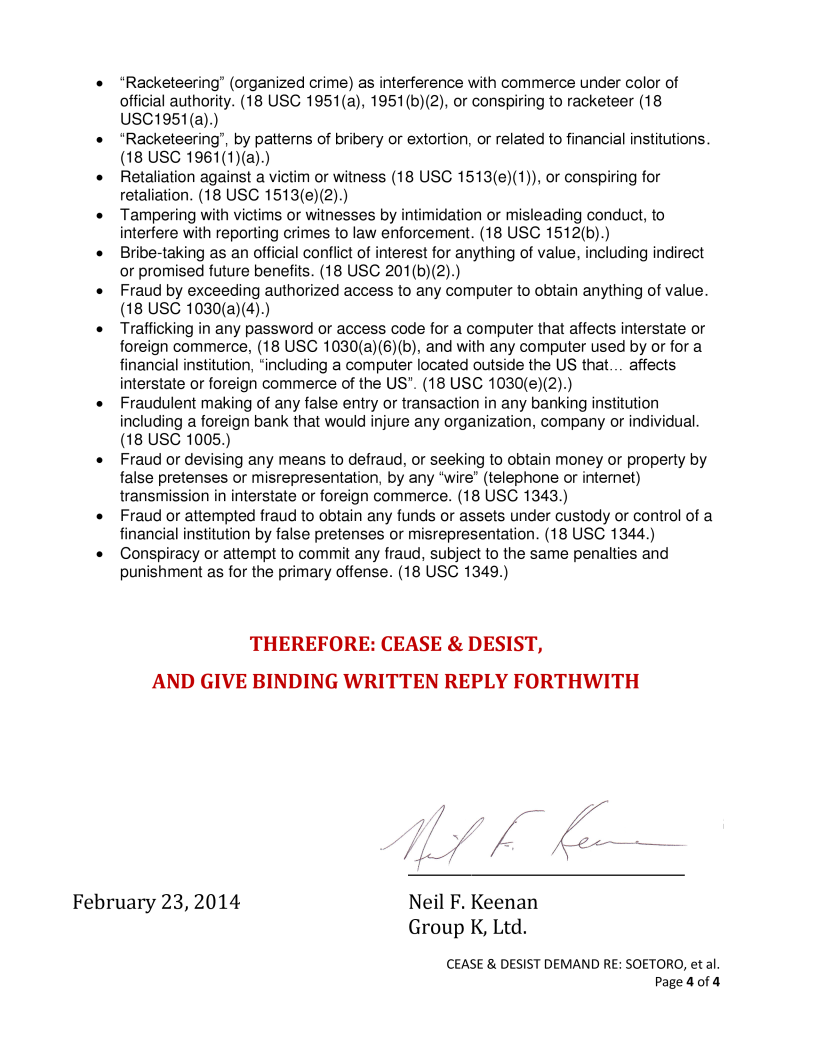 Please support us by downloading our Second Edition of Towards Healthcare Emancipation, a fully illustrated eBook about how you can implement a low cost but extensive and highly effective healthcare system in the comfort of your own home.
The proceeds from this book will be used to fund our next project, Towards Energy Emancipation.
The aim is to make the subject of free energy more understandable for the layman so that anybody could replicate and install his own power plant and be completely living off-grid.
If you haven’t done so, please like our FB page to encourage others to learn more about our work.
Thank you very much for your valuable support.

2 thoughts on “States Getting Tough; Globalists Getting Even”