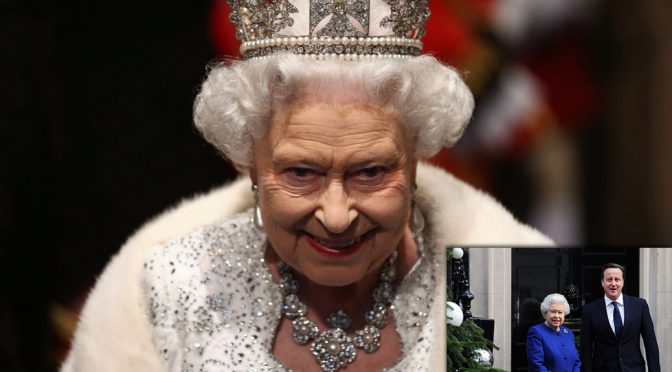 The puppets have problems, too. 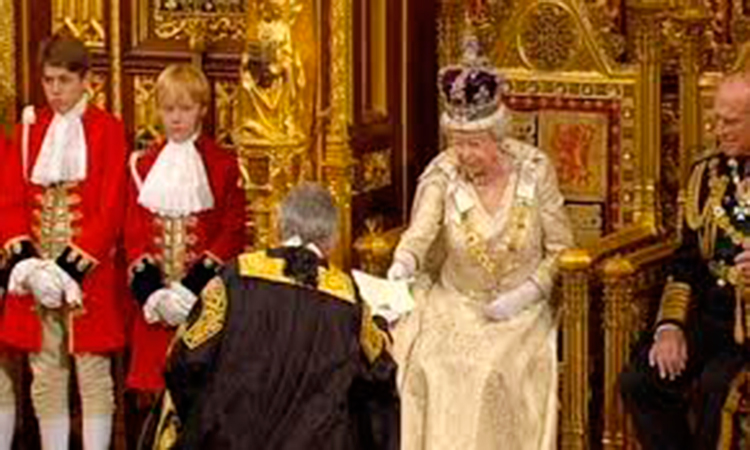 Queen Elizabeth and Cameron issued warrants for a paedophile ring?

January 25, 2014
Today Queen Elizabeth and UK Prime Minister David Cameron were issued arrest warrants. The two were charged with sexual crimes against children as part of an international pedophile ring.
“We have enough evidence to prosecute and hold both the Prime Minister and Queen of England” said ex-Royal Military Policeman Matt Taylor.
Last Thursday Activist David Compan was released from the London Park Royal Mental Health Centre. The psychiatric facility had been swamped with calls about his forced detainment there. David, plus his wife, were arrested on three occasions this month – without being charged. His apparent “crime” was daring to post Brussels common law court arrest warrants on the Queen, Cameron, former Catholic Pope Joseph Ratzinger and 27 other global elites. www.itccs.org
The present Catholic Pope Francis Bergoglio was alleged to be part of child trafficking in an international pedophile ring. Victims who were prostituted as children at the Vatican have come forward, along with survivors who alleged they were abused in international pedophile rings. Victims have also alleged sex abuse and murder of children by former Pope Ratzinger, Catholic Cardinal Bernard Alfrink of Utrecht, a second Catholic Cardinal, a French judge, Belgian priests, other members of the British Royal family and Prince Bernhard of Holland. http://gettingreadyfor2015.wordpress.com/2014/01/25/matt-taylor-orders-t…
A former Argentine government official recently agreed to testify about Bergoglio’s role in a pedophile ring during Argentine’s Junta “Dirty War.” A Brussels international Common Law court was slated on the matter to begin March 15 2014.
On Feb. 25 2013 six judges of a Brussels common law court found the Queen, Cameron, Ratzinger and 37 other global elites guilty in the disappearance of 50,000 Canadian indigent children. Cases were prosecuted by the International Tribunal into Crimes of Church and State, ITCCS. www.iclcj.com
Evidence presented could be reviewed in ITCCS’s Kevin Annett’s “Hidden No Longer” at www.hiddennolonger.com and www.ChildAbuseRecovery.com
Why common law courts?
Common Law court actions were proven effective. In Feb. 2013 Catholic Pope Joseph Ratzinger resigned within days of being issued his arrest warrant.
Should parents consider common law courts to protect their children?
Yes, evidently. On Oct. 10 1964 Queen Elizabeth and Prince Phillip were seen taking ten native children from the Canadian Kamloops Residential School. The age-ten children haven’t been heard of since. Canadian courts refused to hear the case that also involved the 50,000 Canadian missing indigent children.
Are we in danger if global elites were not held responsible for their crimes?
Evidently so. Two witnesses died of mysterious causes prior to the Feb. 2013 Brussels court that convicted the Queen, Cameron, former Pope Ratzinger and 37 other elites of Crimes Against Humanity.
Would our present court system prosecute international pedophile rings?
Evidently not. ITCCS efforts for excavation of 31 child mass grave sites of the 50,000 missing children have been thwarted since the first was discovered in 2008. The child mass grave sites were on grounds of 80 Canadian government-owned residential schools run by the Catholic and Anglican churches and the United Church of Canada. Victims of the Catholic priest abuse scandal have seen very few perpetrators find the inside of a jail cell.
“It’s time to display documentation so that common law verdicts can be understood and enforced by the community” stated Kevin Annett of the ITCCS. Annett will explain common law court action today on the Radio Warrior We the Jury show at 4 pm EDT www.radiowarrior.ca.
Along with the March 15 common law court on Popes Bergoglio and Ratzinger, several common law court actions were being organized for 2014. Survivors came forward from Ireland Templemore Forgotten Victims, Canadian Friends and Relatives of the Disappeared, Italian Rete L’Abuso and in the US, United Against Church Terror, plus government mind-control and Satanic Ritual Abuse survivors from SMART http://ritualabuse.us and Child Abuse Recovery www.ChildAbuseRecovery.com
With help of legal experts and judges, the ITCCS has united survivors of genocide and child torture worldwide. ITCCS is active in 26 countries with over 50 affiliated groups.
To volunteer for the citizen juries of these court actions, contact itccscentral@gmail.com. A Common Law Training Manual can be found at www.itccs.org.
The ITCCS operates from an undisclosed central headquarters in Brussels, Belgium and regional offices in Vancouver, New York, Dublin, London and Paris. ITCCS officers and their legal and political advisers generally retain their anonymity for reasons of security.
source »

Please support us by downloading our Towards Healthcare Emancipation – Premium Edition, a fully illustrated eBook about how you can implement a low cost but extensive and decisively effective healthcare system in the comfort of your own home.
The proceeds from this book will be used to fund our next project, Towards Energy Emancipation.
The aim is to make the subject of free energy more understandable for the layman so that anybody could replicate and install his own power plant and be completely living off-grid.
If you haven’t done so, please like our FB page to encourage others to learn more about our work.
Thank you very much for your valuable support.

January 23, 2014
What would happen if you tried to serve an arrest warrant on Queen Elizabeth and Prince Phillip? Last week British citizen David Compan found out.
Compan was twice arrested without charges, accosted and drugged, as was his wife. He remained incarcerated for at least a month in the London Park Royal Mental Health Centre.
His crime? He doesn’t know as this video of his arrest verified: www.itccs.org
Compan’s problems began on Oct.10 1964 when ten indigent children of the Canadian Kamloops Indian Residential School headed for a picnic with Queen Elizabeth and Prince Phillip. Grieving parents haven’t seen them since.
It wasn’t the first time native children disappeared. There were 50,000 missing children from 80 Indian residential schools run by the Canadian government, English Crown and Anglican, Catholic and United Church of Canada. Child mass gravesites numbering 31 have been discovered on Canadian Indian residential school grounds.
If 50,000 children have gone missing at the hands of global elites, were any of our children safe?
When the Canadian judicial system refused native Indians court time, Kevin Annett of the International Tribunal into Church and State took the case to a Brussels international court. On Feb. 25 2013 six judges found Queen Elizabeth, Prince Phillip, Catholic Pope Joseph Ratzinger and 37 other elites guilty of Crimes Against Humanity. http://itccs.org/tag/rev-kevin-annett/page/7/
An arrest warrant was served on Ratzinger, who immediately resigned from office. This week Compan served Queen Elizabeth and Prince Phillip’s arrest warrants to those who were detaining him.
It appeared that Compan was lucky. Two who witnessed the ten children leave with Queen Elizabeth and Prince Phillip have died of mysterious causes. In 2012 Harry Wilson sustained massive head and brain injuries from an undisclosed source just prior to giving his testimony against Queen Elizabeth and Prince Phillip. Months prior the second witness to the apparent kidnapping by Queen Elizabeth and Prince Phillip preceded Wilson in death via a so-called ‘suicide.'” http://itccs.org/tag/rev-kevin-annett/page/7/
David Compan was not the first ITCCS activist to be imprisoned without charges. Annett was detained in London, held overnight in jail, then deported – all done without being charged. Last October Steve Finney of Kitchener, Ontario Canada was arrested without cause and held in prison for three days. Protests around the globe appeared effective in his release. http://salemnews.com/articles/january092014/activist-arrested-ka.php
Unlawful detention of innocent citizens might continue with the ITCCS plans to convene more common law courts in early 2014. Child abuse victims from 21 countries included at least two witnesses who named former Catholic Pope Ratzinger as present when children were murdered in Satanic rites. Victims of Argentine’s “Dirty War” accused the present Catholic Pope Francis Bergoglio of involvement in a child sex abuse ring at the Vatican. Then there’s that apparent Vatican cover-up in the estimated over nine-million-victim Catholic priest sex abuse scandal. Other victims named as their perpetrators Catholic Cardinal Bernard Alfrink of Utrecht, a second Catholic Cardinal, a French judge, Belgian priests, additional members of the British Royal family and Prince Bernhard of Holland.
Human remains at a Canadian Mohawk Residential School child mass grave site were uncovered by a team of archeologists – after which their four-day dig was shut down. Repeated requests to excavate the Mohawk child mass grave site, plus the other 30 child mass grave sites of the 50,000 missing children, have been thwarted.
In July 2012 a former staff member at the Anglican Church office in Toronto claimed legal efforts to expose child mass grave sites of the 50,000 missing children were blocked by “orders from London” and representatives of the Queen in Ontario. http://itccs.org/tag/rev-kevin-annett/page/7/
What was going on?
The Brussels court was held in behalf of 50,000 missing children. Evidence used was published in Kevin Annett’s “Hidden No Longer” read for free at: www.hiddennolonger.com and www.ChildAbuseRecovery.com
The ITCCS Central Office in Brussels asked supporters to help with Compan’s release by contacting British diplomatic offices in their own countries, plus the Park Royal Mental Health Centre, Central Way, London, NW10 7NS, United Kingdom. Telephone: (country code 44) 020 8955 4490 or 020 8955 4482 or 020 8955 4470.
source »

One thought on “Elizabeth and Cameron issued warrants”