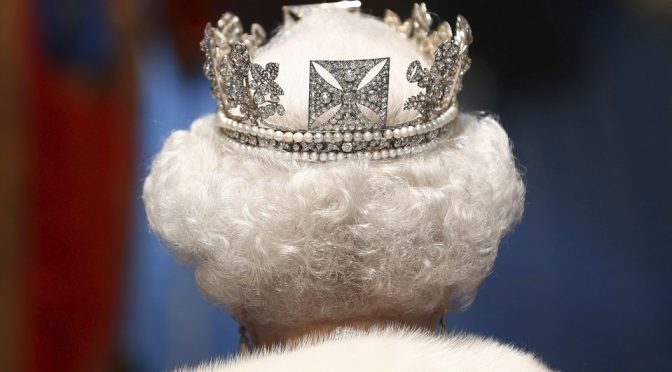 3 April, 2014, 6 pm GMT
Internal Communique
Rome and Brusselsl
Today, two duly appointed sheriffs of our Office attempted to enforce the standing Citizen Arrest Warrant (ICLCJ Court Order No. 02252013-004, Dated 4 March, 2013) against Elizabeth Windsor aka Queen Elizabeth II during her presence in Rome, and bring her into custody as a convicted felon and a fugitive from justice.
Their report is filed with our Office, and reads as follows:
“I, Domingo Santori, accompanied by Carlo Freschi, attempted to apprehend Elizabeth Windsor and place her under arrest as a convicted criminal, in accordance with the Brussels Court Order of March 4, 2013.
“At about 11:50 am today Rome time we approached the reported site of her meeting with President Napolitano at the Presidential Palace in Rome and discovered from a Palace official that the meeting had been moved to an undisclosed location. The lack of any security at the Palace that day seemed to confirm his statement. We then intended to apprehend Windsor later when she met with Pope Francis at the Domus Sanctae Marthae near to the Vatican. .
“Upon reaching the Domus at 1:05 pm, we were met by a sizable security force consisting of members of the National Police but no members of Vatican Security, which was highly unusual. It is our impression that the National Police knew of our intention and were waiting for us.
“We presented the Arrest Warrant to the Captain in charge of the National Police and informed him of our intent to enforce the Court Order and asked for his assistance in this legal procedure. The Captain would not agree to do so and refused to identify himself. He told us we would be placed under arrest if we tried to perform the arrest or “threaten the Pope” in any way. Several policemen then seized our video camera and roughly escorted us from the area. Our camera was not returned to us. We have lodged a formal complaint with the National Police.
“It is clear to us that the Italian government is actively colluding in protecting the convicted criminal Elizabeth Windsor. We recommend that greater force be employed by us in the future and that we rely on better intelligence on the movements of those to be arrested or served. We also ask the Court to issue a formal note of protest to the Italian government for its actions today and that the Court attempt to deputize local police forces to help us.
“On a final note of interest, we were told by one of the policemen at the Domus who assaulted us that ‘You guys are just wasting your time anyway, Il Papa (the Pope) isn’t even in there.’ We are not convinced that the alleged meetings between Elizabeth Windsor and the Pope and the President actually took place in the manner described in the world media. The absence of any Vatican Security at the Domus that day was noticeable and unusual, since it is considered Vatican property.
“We have also noted the cover story being circulated in the world media today that Pope Francis met with Elizabeth Windsor at the Vatican. We know this to be false and that their actual meeting occurred in an undisclosed location after they initially met at the Domus, which is the so-called ‘Pope’s’ private residence.”
Signed, D. Santori and counter signed by C. Freschi,
International Common Law Court Sheriffs, Rome Office of the Court
6 pm GMT
April 3, 2014
Issued by ITCCS Central and the International Common Law Court of Justice
www.iclcj.com
source »