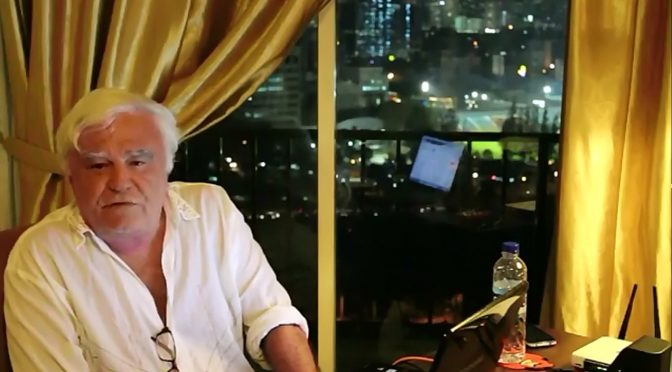 There were arrests made on two men carrying trillions of “fake” bonds in Italy, last Monday. Said “naive” men were trying to open an account at the most secretive bank in the world, i.e. Vatican Bank. 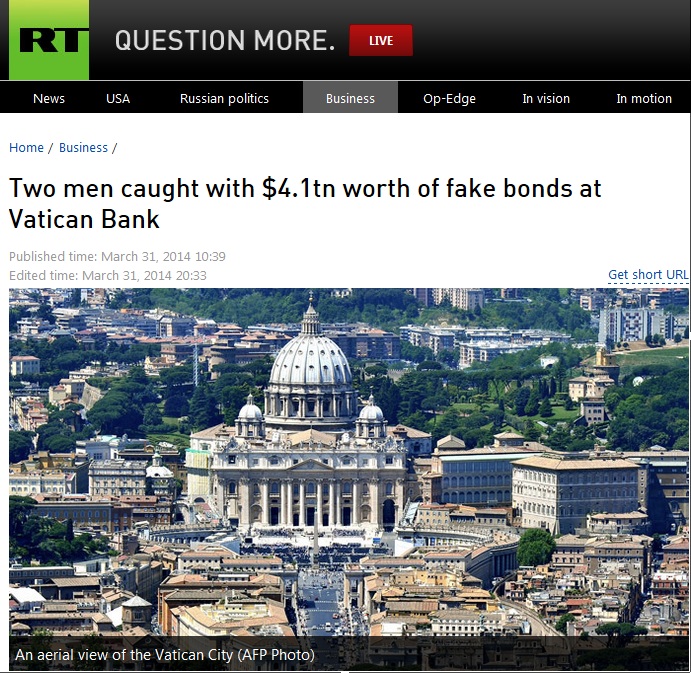 What’s very appalling, or at least, a red flag is that the mainstream media is only reporting a much smaller amount… and without the names of those involved.

Here’s the April 2014 update from The Keenan Group…

NEIL KEENAN UPDATE | Global Accounts Under Attack – The Keenan Team Is The Only Thing In Their Way, And We’re Not Going Anywhere It seems like many years ago we started this journey that some describe as going down the rabbit hole.  I have always referred to it as going down the yellow brick road because now we can finally and clearly see the city that hides the psychopathic criminals who call themselves the New World Order (NWO). They want us to believe that they are human beings yet they don’t have natural human feelings – except that they do love to hate.  Facts bear the truth:  they live and thrive on inflicting torture, pain, disease and death on humanity and Earth’s creatures.  In order to perpetuate their malevolence, they have assembled themselves into one degenerate group aimed at acquiring the world’s finances.  They do not, and cannot, let go of their financial control of this world because it would mean their end.  Having illegally seized major assets from the Global Accounts twice, the NWO is attempting for a third time to hijack the Accounts.  Their ultimate plan for these finances is to fund another 60 years of war, strife and disease and bring the Earth’s population down to a controllable number of less than one billion slaves. But on the other hand, we are in the control seat right here, right now.  Imagine how they would react if we all turned and stormed their bastilles?   They are now looking out of their fortress windows in fear, wondering when we are going to tear down their gates to get to them.  Yes, we are coming, and we will deal with them as they wished to deal with us.  The fewer of them, the fewer problems We The People have.  Count on us coming; and count on it being sooner than the next lousy motion picture flop about humanity’s destruction (Noah). Be warned:  watch your back and watch your doors!  Remember the Cease & Desist that we fed you this past month?  The long list of your crimes against humanity is there for all to see.  The world knows exactly what you are doing, and we are here to stop your insanity! This past month the war has begun.  It may not have begun in earnest in the West, but the war against the theft of the Global Accounts and the world’s finances has started, and is at full speed ahead here in the East.
No idle threat:  Fire! – We beg you to burn.
http://neilkeenan.com/wp-content/uploads/2014/04/Fire.mp3
Video Highlights:

[youtube=https://www.youtube.com/watch?v=HWn7ddBAI50&feature=player_embedded]
source »
Please support us by downloading our Towards Healthcare Emancipation – Premium Edition, a fully illustrated eBook about how you can implement a low cost but extensive and decisively effective healthcare system in the comfort of your own home.
With the instructions from this eBook you can easily defeat cancer, AIDS and all other parasitic diseases for good. Find out more about it here.
The proceeds from this book will be used to fund our next project, Towards Energy Emancipation.
The aim is to make the subject of free energy more understandable for the layman so that anybody could replicate and install his own power plant and be completely living off-grid.
If you haven’t done so, please like our FB page to encourage others to learn more about our work.
Thank you very much for your valuable support.