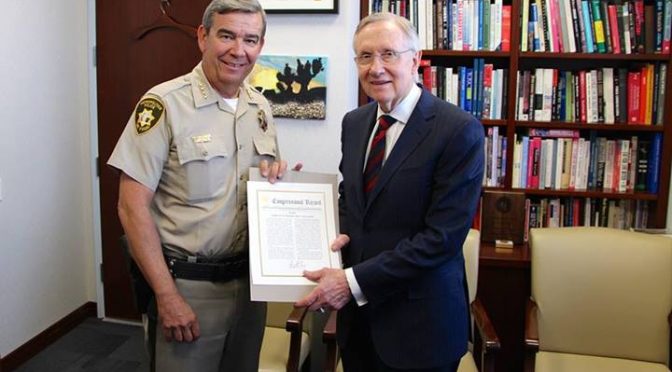 After the FEDs arrested one of his sons, literally grinding his face into gravel with their boots on his neck and head, they threw down Bundy’s 57 year old cancer-survivor sister who was peacefully protesting these FED goons, ruffing up her knees and hands.  These FED thugs repeatedly tasered his other unarmed son, who just ripped off the wires  and stood his ground in true American cowboy fashion.

But in the end, the Bundys, with the support of about 1,000 citizens and a few good militia from Nevada and surrounding Western States, won this battle as the FEDs called off any further cattle round ups and retreated to the cattle pen housing the 100 head of cattle they had already absconded.  But that was not enough for Bundy.  He demanded the FEDs surrender their weapons and leave the county, and gave them one hour for a full surrender.
After the hour was up, Bundy led the crowd marching down to the FEDs who were armed to the teeth in their attempt to protect the absconded cattle.  In the face of bull-horn threats of getting shot, the crowd continued their march to seize the Bundy cattle with the FEDs retreating, again, out of the county in a courageous show of the American people’s power and FED cowardice.
Congratulations to the Bundy Family and to all who showed up and supported this victory of the American people against this cowardice FED leviathan. 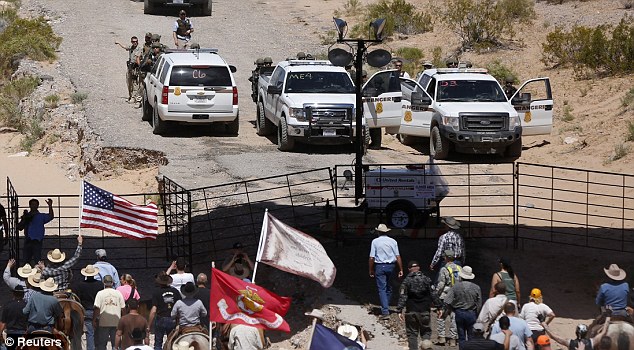 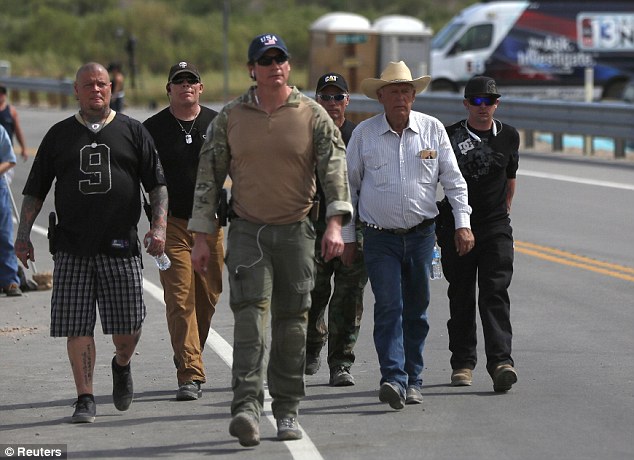 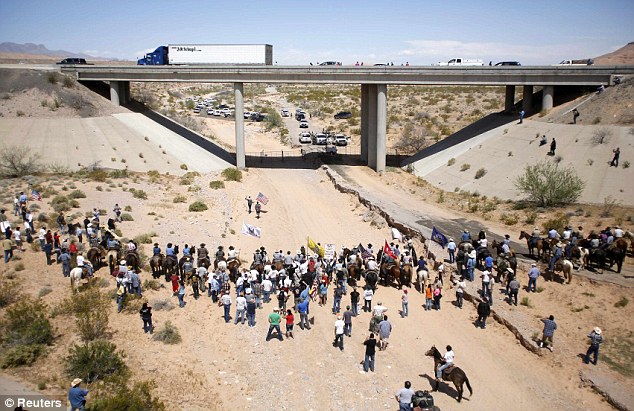 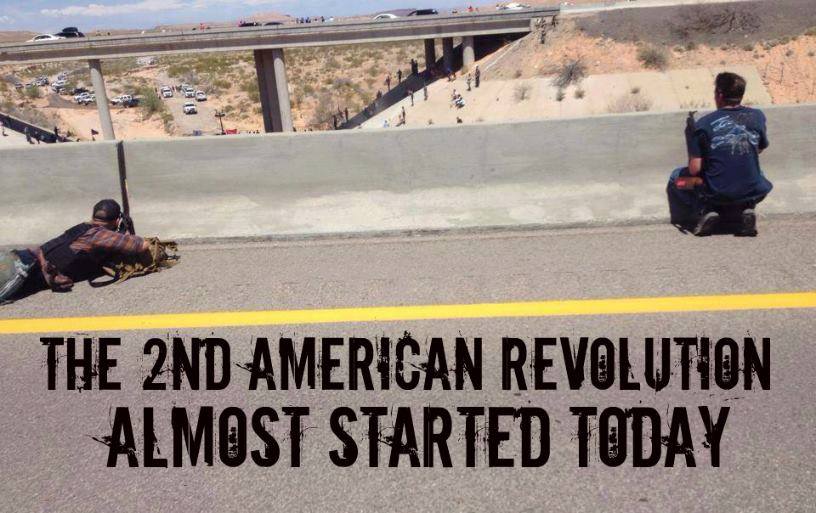 2. Obummer Blunders:  It’s Geopolitical Amateur Hour
Later this month Obama is taking an Asian trip, only touching down in those Asian countries that have land disputes with China.  Obama’s former Columbia University professor, brain trust, and elder globalist, Zbigniew Brzezinski, long ago described the globalist’s geopolitical importance and their imperialist designs on the Ukraine in his book, “The Grand Chessboard.”  Like a script taken from that book, Obama and his team headed by John Kerry and Victoria Nuland initiated the Zionist coup d’etat of Ukraine’s democratically-elected government with neo-nazi skinheads to install Zionist banksters – literally central bankers, to run Ukraine with puppet master strings attached.
This imperialist foreign policy is nothing new.  It fits hand-in-glove, and is just a continuation of the zionist neo-cons’ 9-11 false flag used as a pretext to invade or disorient every nation not in compliance with the FED petrodollar policies of Bush, Cheney, Wolfowitz, & Company.  Only countries that lacked a Rothchild central bank, and thumbed their nose at the great, late world reserve currency dollar by trading oil for gold or other non-dollar assets have been sacked and pillaged (or threatened to be) by the West (Iraq, Libya, Syria, and Iran).  Then, when the democratically elected Ukrainian government decided is was not in their strategic interest to align themselves with the financially collapsing EU, Ukraine was toppled by neo-nazis for zionist central bankers who would take orders from the Western hegemony.
The USSR was taken down financially by the illegal use of the Global Accounts which were mirrored by Western corporations.  Reagan, Mitterand, and a lackey by the name of Wanta orchestrated this fraud.  Wanta to this day makes claims to these illegal mirrored accounts.  The actual owners and depositors are telling him to go to hell.  And Putin, rightfully so, has been kicking them all the hell out of Russia.
What the globalists grossly miscalculated were:

Meanwhile, as the US Corporation’s Far East foreign policy goes up in flames, the architect of that imperialism, Brzezinski, pens a laughable Washington Op-Ed, name-calling Putin as the aggressor and seeking the US Corporation to double-down with armed force.  Another cabal case of dumb getting dumber.
With the Far East ablaze in US Corpration-Zionist intervention, Obama takes off later this month for a tour of southeast Asia, touching down only in those countries which have territorial disputes with China — this on the heels of his penning a new agreement for a new and large US Corporation military presence in Australia, and beefing up US Corporation military presence surrounding China.  Obama is trying to repeat history with China, that which the West did to the USSR.  It’s becoming less and less likely Obama will survive this battle.  The Pentagon will stand down.  NATO will not act if the Pentagon will not support them – it’s not even their theater of operation.  Obama and the cabal will end up fighting their wars with mercenaries, but from where?   Soon their world will shrink down to a single room where they get to test their electronic guillotines – not from the button side, but from the side of the blade.
The Keenan Team has requested, through direct contact at the highest levels, that China, Russia, and all willing Asian countries (The East) establish a no-fly zone for Obama in Asia.  This reciprocates the Obama Administration’s policy of forcing down flights of heads-of-state, a precedent Obama established with Bolivia’s president, Evo Morales, when they decided to force-land his plane to search it for Edward Snowden, who was not on board.  Obama can then be arrested and adjudicated as International Terrorist Number 1 for all the past, current, and future false flags, and for his crimes against humanity in his support and implementation of multi-national genocidal policies, such as Geoengineering, HARRP-designed disasters, the weaponization and world-wide use of depleted uranium, GMO poisoning, and Fukushima, among a long list of death-penality justified crimes.
3.  Suicided Banksters. 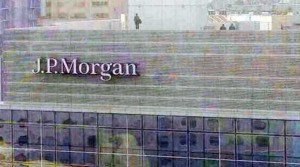 As noted in previous posts, the cabal has authorized a list of 1,500 bankers to be slated for “suicide.”  These are the scapegoats who will no longer be able to point their fingers up the pyramid when the FED dollar inevitably loses its world reserve status and the proverbial S.H.T.F.  That list has grown by another 1,700 names, approximately.  Advice:  Sing now or forever hold your peace. 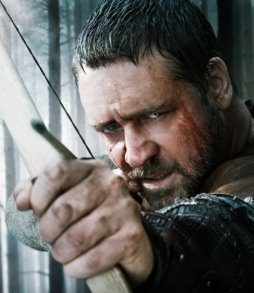 Now . . . others have gotten into this game, which has alarms going off  within cabal circles.  Top echelon banksters are beginning to tick off – except they were not on the cabal list – they ARE the cabal!
The “Robin Hood of Liechtenstein” is reportedly responsible for the recent untimely demise of Bank Frick & Co. CEO Juergen Frick, who also was Chairman and CEO of Crystal Fund Management.
In another “unauthorized” termination, the former CEO of Dutch Bank ABN Amro and his family were found killed or murdered  in what authorities are misrepresenting as a “family tragedy.”
It seems to be open season on the cabal – they’re being hunted under Bushes, and under a Rock – fellers are dropping like flies.  The Rothschilds, and even that scumbag pedophile, Etienne Davignon, should start looking over their shoulders.
4.  Swissindo Shenanigans.
We’ve had a couple of comments to our last post from Swissindo participants who are bemoaning our calling out the Swissindo fraud.  Karin E.J. Kolland has incorporated most of the themes of those in support of Swissindo, so we have moved her comment above the fold to address it.
On Arpil 6, 2014 at 7:03 a.m. eastern time, Ms. Kolland commented with the following:
“Dear Mister Neil Keenan,
You in this article [are] completely [on the] wrong track — they confuse us fatally well with completely different people. We are like you Mr. Keenan freedom fighter[s] and want to transform the old [money system] based on debt and compound interest!
“Everything we do, we do open[ly] and transparent[ly]. We want the old Bush NWO transform[ed] peaceful[ly] and replace[d] by a new real universal order that is consistent with universal laws . These large gold covered financial resources of mankind are made available . Through the human bond every person on the planet gets a monthly basic income and resources for a home. All countries of the world get through the Master Key Plan substantial financial resources to build a healthy infrastructure and promotion of such projects [as to] serve the good of mankind: Venus Project , New Earth Project , free energy , environmental, healthy farming, permaculture , medicine and alternative medicine and much more. 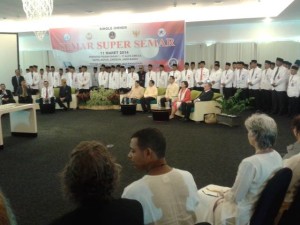 “Come , I invite you ! I ‘m Austria[n] . . . and can make [you] known directly [to] Mister Sino . Do not write nonsense but let us together serve the highest good of mankind .
“Sincerely yours
Karin E. J. Kolland”
About twenty minutes after this post, Ms. Kolland identifies herself as “the woman in the red costume” in the above photo which we had previously published.
Unfortunately, Ms. Kolland, Swissindo is a wolf in sheep’s clothing.  This fraud would not change the current financial system but would give the cabal another opening to use, abuse and misappropriate the Asian peoples’ gold.  Stopping this misuse, and depriving the Globalist/NWO/Cabal/Illuminati of this financial oxygen, while supporting the enlightened Asian world’s mission to utilize their treasure to benefit mankind, is Neil Keenan’s mission, and he plays a critical role.
The Swissindo cabal fraud is not at all difficult to unmask.  The alleged signatory list in the Swissindo “Office Of Military Settlement” reads like a who’s who of the cabal’s committee of 300:

H.E Pres. Hisashi Owada (The President of the International Court of Justice),

H.E. Ch. Ben Bernanke (chairman of the Federal Reserve, the central bank of the United States),

Does anybody on the planet think the cabal is going to voluntarily sign over the financial underpinnings of their world hegemony?  In any event, these dark players are not stakeholders in the Dragon Family’s gold reserves.  It’s like Obama’s State Department signing over the Ukraine to Nazi Zionists – IT’S NOT THEIRS.  And, of course, there was no treaty signed by these parties.  This “treaty” is a blatant fraud.  Had a treaty been signed, thieves do not convert their loot by signing documents.
Swissindo has always been a fraud.  They are Stalinists to the core.  Their vision is of a one world dictatorship where property is confiscated, and doled out “to each according to their need,”  as long as you are toeing the line with their dictates.  Their world,  Here we were, back in June of 2013, tracking down their offices that existed only on paper:
[youtube=https://www.youtube.com/watch?feature=player_embedded&v=tOhUxfTVkME]
___________________________________________
On a lighter note, we are so pleased to hear reports that Jean Haines is marshalling such robust traffic on her site – a reported 95,000 hits a day!  We have always been proud of our exposure through Jean’s site and are particularly pleased that, after a small hiatus, Jean has resumed posting our updates, and that Google continues to rank the Neil Keenan Updates the #1 category on Jean’s site.  But be careful, Jean!  New commentators like Graham are known cabal shills.
Copyright © 2014, GROUP K, Ltd.
Please support us by downloading our Towards Healthcare Emancipation – Premium Edition, a fully illustrated eBook about how you can implement a low cost but extensive and decisively effective healthcare system in the comfort of your own home.
With this eBook you can easily defeat cancer, AIDS and all other parasitic diseases for good. Find out more about it here.
The proceeds from this book will be used to fund our next project, Towards Energy Emancipation.
The aim is to make the subject of free energy more understandable for the layman so that anybody could replicate and install his own power plant and be completely living off-grid.
If you haven’t done so, please like our FB page to encourage others to learn more about our work.
Thank you very much for your valuable support.