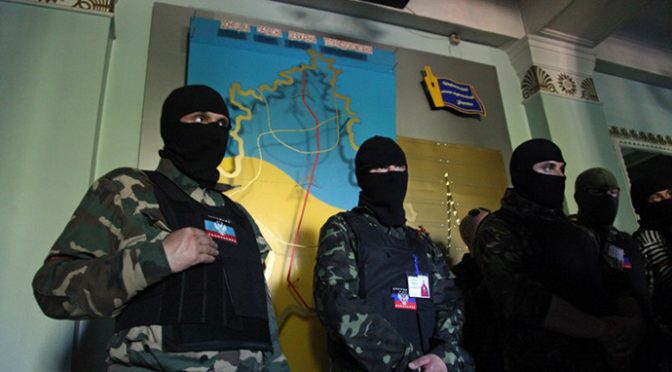 Activists stand guard outside a regional television station after it was seized by pro-Russian separatists, in the eastern Ukrainian city of Donetsk, on April 27, 2014. (AFP Photo / Alexander

Pro-Russian protesters have seized a local state TV station in the city of Donetsk in eastern Ukraine, demanding that Russian TV channels be broadcast there. They also want to launch a “Donetsk People’s Republic” TV channel.
According to media reports, technical work is currently being done at the TV station to restart the transmission of Russian channels. Itar-Tass reports that some Russian TV channels have resumed work in Donetsk.
“Their experts are now setting up equipment on our frequency to broadcast Russian TV channels,” TV station CEO Oleg Dzholos told Ukraine’s Channel 5, Interfax-Ukraine reported.
One of the protesters has told the news agency that “Russia 24” channel is already broadcasting instead of local “Channel 27”.
Protesters have left the building, but still left their security there.
“Nobody freed the TV station – protesters left, but there is our security there as well as our technicians and the station’s crew,” an unnamed man told Interfax-Ukraine. Masked activists march to seize a regional television station in the eastern Ukrainian city of Donetsk, home of the local telecommunication antennas and studios of the regional TV station Channel 27, on April 27, 2014. (AFP Photo / Anatoliy Stepanov)
It has also been reported that pro-Russian protesters held talks with the TV center’s executives to begin broadcasting the “Donetsk People’s Republic” television channel.
“There were many demands. First – switch off Ukrainian channels. I explained that we are Donetsk state TV and radio station and from our central control room, there is only our signal. There were experts and they understood me. The following demand was – not a demand, an ultimatum – to switch on, if I am not mistaken, Russia-24 TV channel,” Dzholos said.
So far, all Ukrainian TV channels continue their broadcast.
Protesters entered the TV station late Sunday afternoon, saying they were unsatisfied with the way the situation in the region was covered in local news and shows. Protesters demanded that Ukrainian channels be blocked.
They have taken down the Ukrainian flag from the TV station’s office and hoisted the flag of the self-proclaimed Donetsk People’s Republic. It was also taken down later. Pro-Russian activists seize a regional television station in the eastern Ukrainian city of Donetsk, on April 27, 2014. (AFP Photo / Anatoliy Stepanov)
Protesters brought satellite antennas and other equipment and placed guards at the entrance to the television center, Itar-Tass reported.
Prior to taking control of the TV station, over 3,000 people gathered at Donetsk’s central Lenin Square. Protesters started the rally with one minute’s silence to commemorate Berkut Special Forces officers killed in clashes with radicals in Kiev’s Independence Square, and activists killed by Right Sector radicals at a checkpoint in Slavyansk on Easter Sunday.
Russian TV channels have been blocked across Ukraine since the beginning of March, after the Ukrainian media watchdog claimed that shutting down Russian TV stations ensured the country’s“national security and sovereignty.”

Pro-Russian activists hold Russian flags and shout slogans during a rally outside a regional television station which was seized by pro-Russian separatists, in the eastern Ukrainian city of Donetsk, on April 27, 2014. (AFP Photo / Alexander Khudoteply)
At least five major Russian channels, including Vesti, Russia-24, Channel One’s international broadcasts, RTR ‘Planeta’ and NTV World were immediately excluded from the list of options by providers throughout Ukraine.
The move was strongly condemned by the OSCE, which called the move “repressive” and “a form of censorship.” A Ukrainian police officer looks at activists standing guard outside a regional television station after it was seized by pro-Russian separatists, in the eastern Ukrainian city of Donetsk, on April 27, 2014. (AFP Photo / Alexander Khudoteply)
Since then, the situation in Donetsk has deteriorated, with people demanding a referendum on the region’s autonomy from Kiev. Amid massive protests, when a number of government building were stormed and seized by anti-government activists, Kiev launched an “anti-terrorist” military operation targeting rallying civilians. 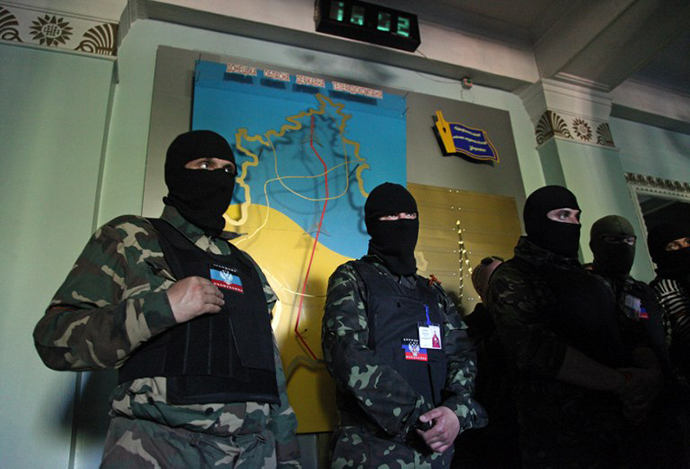 One thought on “Americans Should Do this to CNN, Fox, etc.”