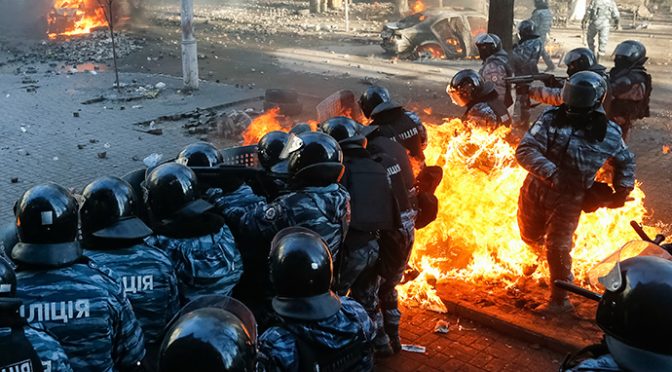 The EU/US  may not have full control over Ukraine but they succeeded in injecting terror over its population. 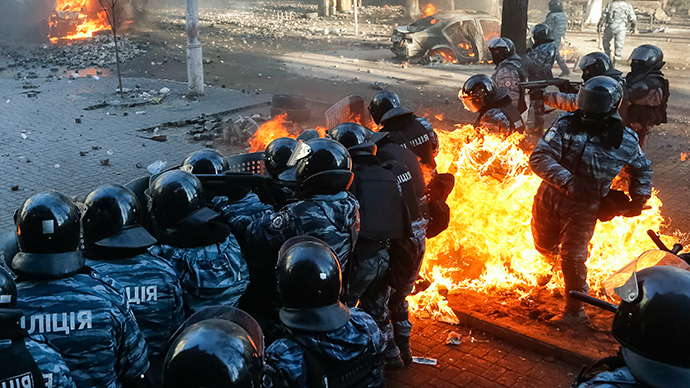 A report on human rights violations, law abuses, use of torture, inhuman treatment and other crimes in Ukraine from the end of November 2013 to the end of March 2014, a so called ‘White Book’, has been presented by the Russian Foreign Ministry.
The authors compiled their facts by carefully monitoring Ukrainian, Russian and some Western media reports. The study also considered statements from Ukraine’s “new government” and their supporters, and numerous eyewitness accounts, including those posted on the internet. They also recorded observations and interviews with people on the scene, and those collected by non-governmental organizations: The Foundation for Researching Problems in Democracy, and the Moscow Bureau for Human Rights.
The study accuses those “who cynically, in pursuit of their own selfish interests …and pseudo-democratic demagogy, are plunging a multimillion multi-ethnic Ukrainian population into extremism, lawlessness, and a deep crisis of national identity.”
According to the authors, the aim of the document is “to focus on facts which the international community and key international human rights bodies have not shown proper and impartial attention to.”
“The onslaught of racism, xenophobia, ethnic intolerance, the glorification of the Nazis and their Banderite sycophants should be brought to a speedy end through the united efforts of the Ukrainian people and the international community,” it adds.
The document states that the alternative may have “devastating consequences for peace, stability, and democratic development in Europe.” That’s why it’s “necessary to prevent a further escalation of this situation,” it adds.
The document, written in Russian and English, details examples of violations to the right to life and violations of public order and safety, as well as the use of torture, inhuman treatment and other crimes committed in the period from the end of November 2013 to the end of March 2014. It was presented to Russian President Vladimir Putin on Monday. A protester hurls a molotov cocktail towards police from the barricades at Independence square in Kiev on February 19, 2014 (AFP Photo / Louisa Gouliamaki)

According to the authors of the study, the list of the “most flagrant violations of fundamental international norms by ultranationalist, neo-Nazi, and extremist forces which have monopolized the Euromaidan protests, while far from being exhaustive, nevertheless gives enough grounds to claim that such violations were widespread.”
Another violation, according to the authors of the ‘White Book’, is the “interference in the internal affairs of a sovereign state.”
Among the violations that took place in Ukraine, the ‘White Book’ mentions weapons, equipment, and the tactics of the Euromaidan participants. It also presents evidence of deliberately committed violence and provocations by the so-called “Peaceful demonstrators.”
Meanwhile, Discrimination along ethnic and linguistic lines, xenophobia and racial extremism and incitement of racial hatred are also mentioned in the study, along with religious intolerance, including threats to the Russian Orthodox Church.
The document also mentions the serious restrictions on the freedom of media and censorship in Ukraine. Violations of the right to freedom of thought and belief, including political beliefs, and violations of the right to express them are also mentioned in the ‘White Book’
“The history of the twentieth century has given tragic lessons which would be irresponsible and also at times just unlawful to ignore. The ‘White Book’ is a signal to those who have forgotten this or pretend to forget,” the document states.

Below there are several cases of human rights violations described in the White Book:
On February 18, extremists from the Right Sector seized the headquarters of the Party of Regions in Kiev. Two men were brutally murdered, one died of suffocation and burns, and the other’s head was smashed in. Females who were present in the building were stripped half-naked, their backs painted with symbols and slogans.
On February 19, Maidan protesters severely beat and publicly tortured the governor of the Volyn region in western Ukraine, in the northwestern city of Lutsk. When Aleksandr Bashkalenko tried to calm down a raging mob of rioters, he was handcuffed to the local Euromaidan stage and asked to sign a “voluntary” resignation. After he refused, radicals poured several liters of water on him in February temperatures and left him handcuffed.
Also on February 19, several buses with activists returning to Crimea from anti-European integration protests in Kiev were stopped at barricades which possessed the flags of the Udar (Strike) and Svoboda parties in Cherkassy region, central Ukraine. The people, both men and women, were dragged out of the buses by militants who beat them with bats, doused them with gasoline, and threatened to set on them fire. Many of those captured were forced to take off their shoes “for the needs of Maidan soldiers.” The humiliation and abuse continued for several hours. There were casualties among the victims. Police chose not to interfere.
On March 16, at least 30 Ukrainian radicals brutally beat a group of local teenagers in the city of Dnepropetrovsk, eastern Ukraine, because they did not answer the nationalists’ greeting of “Glory to Ukraine!” Such reports have become commonplace in the city. Though such crimes frequently occur in front of the police, officers try not to get involved, according to the White Book.
Abusive attitudes towards Jews is another violation of human rights described in the document, as it draws an example of vandalism towards a monument to Jewish victims of the Holocaust in the city of Aleksandria in Kirovograd region on February 2. The vandals used black paint to draw a swastika and wrote “Death to kikes” and “Zieg heil” on the monument.
Earlier, on January 17, Dov Ber Glickman, a 33-year-old Russian citizen, was beaten up after leaving a synagogue. It appeared that the attackers had blades installed on the toes of their shoes, which left deep wounds.
source »
Please support us by downloading our Towards Healthcare Emancipation – Premium Edition, a fully illustrated eBook about how you can implement a low cost but extensive and decisively effective healthcare system in the comfort of your own home.
With this eBook you can easily defeat cancer, AIDS and all other parasitic diseases for good. Find out more about it here.
The proceeds from this book will be used to fund our next project, Towards Energy Emancipation.
The aim is to make the subject of free energy more understandable for the layman so that anybody could replicate and install his own power plant and be completely living off-grid.
If you haven’t done so, please like our FB page to encourage others to learn more about our work.
Thank you very much for your valuable support.