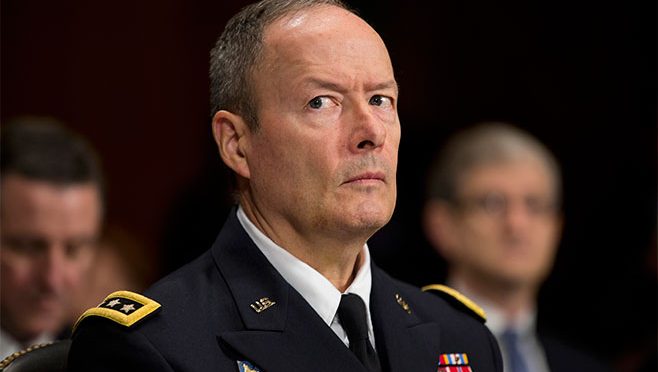 NSA revelations continuing and getting high-profiled…

The just-retired long-time NSA chief, Gen. Keith Alexander, recently traveled to Australia to give a remarkably long and wide-ranging interview with an extremely sycophantic “interviewer” with The Australian Financial Review. The resulting 17,000-word transcript and accompanying article form a model of uncritical stenography journalism, but Alexander clearly chose to do this because he is angry, resentful, and feeling unfairly treated, and the result is a pile of quotes that are worth examining, only a few of which are noted below:

AFR: What were the key differences for you as director of NSA serving under presidents Bush and Obama? Did you have a preferred commander in chief?
Gen. Alexander: Obviously they come from different parties, they view things differently, but when it comes to the security of the nation and making those decisions about how to protect our nation, what we need to do to defend it, they are, ironically, very close to the same point. You would get almost the same decision from both of them on key questions about how to defend our nation from terrorists and other threats.

The almost-complete continuity between George W. Bush and Barack Obama on such matters has been explained by far too many senior officials in both parties, and has been amply documented in far too many venues, to make it newsworthy when it happens again. Still, the fact that one of the nation’s most powerful generals in history, who has no incentive to say it unless it were true, just comes right out and states that Bush and The Candidate of Change are “very close to the same point” and “you would get almost the same decision from both of them on key questions” is a fine commentary on a number of things, including how adept the 2008 Obama team was at the art of branding.
The fact that Obama, in 2008, specifically vowed to his followers angered over his campaign-season NSA reversal that he possessed “the firm intention — once I’m sworn in as president — to have my Attorney General conduct a comprehensive review of all our surveillance programs, and to make further recommendations on any steps needed to preserve civil liberties and to prevent executive branch abuse in the future” only makes that point a bit more vivid.

It’s hard to recall a better and clearer example of how mindless and uncritical the American media is when it comes to the unproven pronouncements of the U.S. Government. Back in December, 60 Minutes broadcast a now-notorious segment of pure access journalism in which they gullibly disseminated one false NSA claim after the next in exchange for being given exclusive(!) access to a few Secret and Exciting Rooms inside the agency’s headquarters. The program claimed that Snowden “is believed to still have access to 1.5 million classified documents he has not leaked”. On its Twitter account, 60 Minutes made this claim to promote its show:

Mike McConnell, the vice chairman of Booz Allen and former Director of National Intelligence in the Bush administration, then claimed that ”Snowden absconded with 1.7 million to 1.8 million documents.”
Ever since then, that Snowden “stole” 1.7 or 1.8 million documents from the NSA has been repeated over and over again by US media outlets as verified fact. The Washington Post‘s Walter Pincus, citing an anonymous official source, purported to tell readers that “among the roughly 1.7 million documents he walked away with — the vast majority of which have not been made public — are highly sensitive, specific intelligence reports”. Reuters frequently includes in its reports the unchallenged assertion that “Snowden was believed to have taken 1.7 million computerized documents.” Just this week, the global news agency told its readers that “Snowden was believed to have taken 1.7 million computerized documents.”
In fact, that number is and always has been a pure fabrication, as even Keith Alexander admits. The claimed number has changed more times than one can count: always magically morphing into randomly chosen higher and scarier numbers. The reality, in the words of the General, is that the US Government ”really [doesn’t] know[] what he actually took with him” and they ”don’t have an accurate way of counting”. All they know is how many documents he accessed in his entire career at NSA, which is a radically different question from how many documents he took. But that hasn’t stopped American media outlets from repeatedly affirming the inflammatory evidence-free claim that Snowden took 1.7 million documents. As usual, even the most blatantly unreliable claims from National Security State officials are treated as infallible papal pronouncements by our Adversarial Watchdog Press.
There’s an equally vital point made by Alexander’s admission. The primary defense of the NSA and its defenders is that one need not worry about the staggering sums of data they collect because they have implemented very rigorous oversight mechanisms and controls that prevent abuse. Yet Edward Snowden spent months downloading a large amount of highly sensitive documents right under their noses. And not only did they have no idea that he was doing it, but now – even after spending large sums of money to find out – they are still completely incapable of learning which documents he took or even how many he took. Does that at all sound like a well-managed, tightly controlled system that you can trust to safeguard your most personal data and to detect and prevent abuse of this system by the tens of thousands of people who have access to it?

AFR: What is your personal opinion on the decision to award a Pulitzer Prize to the Guardian and Washington Post newspapers for their “revelation of widespread secret surveillance by the National Security Agency, helping through aggressive reporting to spark a debate about the relationship between the government and the public over issues of security and privacy”?
Gen. Alexander: I’m greatly disappointed that we have rewarded those who have put so many lives at risk. I think that’s the best way to say that. . . . At the end of the day, I believe peoples’ lives will be lost because of the Snowden leaks because we will not be able to protect them with capabilities that were once effective but are now being rendered ineffective because of these revelations.

There are few things in life more ironic than being accused by U.S. Generals, including those who participated in the war in Iraq, of being responsible for the loss of lives. For that sort of irony, nothing will beat that episode where the US Pentagon chief and Chairman of the Joint Chiefs of Staff announced that WikiLeaks – not themselves, but WikiLeaks – has “blood on its hands” by virtue of publishing documents about the U.S. war in Afghanistan. In the world of the U.S. National Security State and its loyal media, those who go around the world killing innocent people over and over are noble and heroic, while those who report on what they do are the ones with “blood on their hands”.
But what makes this claim so remarkable is how often it is made and how false it always turns out to be. The accusation about WikiLeaks was ultimately demonstrated to be false. The same was true of the identical claim made about NSA whistleblower Thomas Drake, and the leaker who exposed the Bush-era warrantless eavesdropping program, and Pentagon Papers leaker Daniel Ellsberg, and virtually every other person who has brought unwanted transparency to what the U.S. Government is doing in the dark. But accusing whistleblowers and journalists of causing the deaths of innocent people is a tactic people like Gen. Alexander continue to embrace because it’s virtually never pointed out by our stalwart media how many times that claim has been proven to be an utter fabrication.
source »
Please support us by downloading our Towards Healthcare Emancipation – Premium Edition, a fully illustrated eBook about how you can implement a low cost but extensive and decisively effective healthcare system in the comfort of your own home.
With this eBook you can easily defeat cancer, AIDS and all other parasitic diseases for good. Find out more about it here.
The proceeds from this book will be used to fund our next project, Towards Energy Emancipation.
The aim is to make the subject of free energy more understandable for the layman so that anybody could replicate and install his own power plant and be completely living off-grid.
If you haven’t done so, please like our FB page to encourage others to learn more about our work.
Thank you very much for your valuable support.

One thought on “Keith Alexander Unplugged”