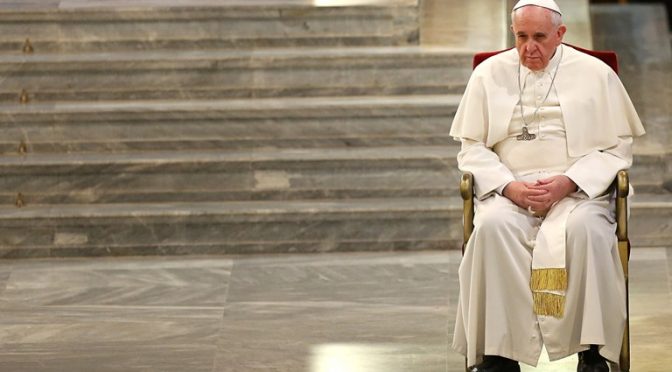 Kevin Annett interview: Vatican circulates rumours concerning Pope Bergoglio’s bad health to avoid Satanic 9th circle murder evidence – May 23, 2014
[youtube=https://www.youtube.com/watch?feature=player_embedded&v=CCX_oujvuMg]
VANCOUVER, BC – In a wide-ranging Exopolitics TV interview with Alfred Lambremont Webre, Kevin Annett, Field Secretary of the International Tribunal into Crimes of Church and State, revealed Vatican infighting and rumours of Pope Francis “bad health” as divserions from the evidence of Satanic child sacrifice in the Papal 9th Circle rituals. Evidence of these rituals has been recorded from eye witnesses at the Brussels trial of Pope Jorge Bergoglio (“Pope Francis”), the Archbishop of Canterbury, the Superior General of the Jesuits and others for child trafficking and genocide. The trial, now in its 3rd session, is expected to continue for as long as a year.
In the course of the interview, Kevin Annett discussed the support of Belgian MP Laurent Louis for the ITCCS.ORG Brussels trial. He also discussed the ongoing Common Law Sheriff and Enforcement Officer training for ITCCS and the International Common Law Court of Justice and its expansion in the U.S. In Canada, Common Law Sheriffs are being trained and deployed to prevent a reported 9th Circle Child Sacrifice Ritual planned at the Montreal Cathedral Marie Reine du Monde for August 15, 2014.
Transcript of witness evidence
In his interview, Kevin Annett read from a sample transcript of evidence given in the Brussels trial that connects child sacrifice, genocide and torture committed during the 1950s in programs involving former German SS officers stationed at the Lincoln Park Air Force base in Calgary, Alberta, and elsewhere in Canada. The SS officers, who had been supplied with new identities by the Canadian Armed forces, were connected to the Knights of Darkness, a Satanic child sacrifice organization of which Pope Joseph Ratzinger was a member. Both the Government of Canada and Pope Ratzinger were defendants and found guilty of child genocide in a previous trial before the International Common Law Court of Justice.
London, UK & Rome: Enforcement Action June 29 – July 2, 2014
Kevin Annett reiterated that during June 29 – July 2, 2014 a Common Law Court Enforcement Action will take place in London UK and Rome Italy.
Kevin Annett will be leading an ITCCS enforcement delegation accompanied by Common Law Sheriffs and supporters to the UK and to Rome to enforce Court arrest warrants against Elizabeth Windsor and against Pope Joseph Ratzinger and others already convicted by the Common Law Court of Justice for crimes against humanity. These enforcement actions will be broadcast via live media.
Individuals who live in the UK and in Rome and who want to support the Common Law Court of Justice actions by accompanying the ITCCS delegation and videoing the proceedings on their smartphones, etc. are encouraged to contact Kevin Annett at [email protected] or The Central Office of The International Common Law Court of Justice, Brussels [email protected]
www.itccs.org
www.iclcj.com
Kevin Annett: Vatican rumors Pope Bergoglio’s bad health and resignation to avoid Satanic 9th circle murder evidence
http://exopolitics.blogs.com/exopolitics/2014/05/kevin-annett-vatican-rumors-pope-bergoglios-bad-health-and-resignation-to-avoid-satanic-9th-circle-murder-evidence.html
source »
Please support us by downloading our Towards Healthcare Emancipation – Premium Edition, a fully illustrated eBook about how you can implement a low cost but extensive and decisively effective healthcare system in the comfort of your own home.
With this eBook you can easily defeat cancer, AIDS and all other parasitic diseases for good. Find out more about it here.
The proceeds from this book will be used to fund our next project, Towards Energy Emancipation.
The aim is to make the subject of free energy more understandable for the layman so that anybody could replicate and install his own power plant and be completely living off-grid.
If you haven’t done so, please like our FB page to encourage others to learn more about our work.
Thank you very much for your valuable support.