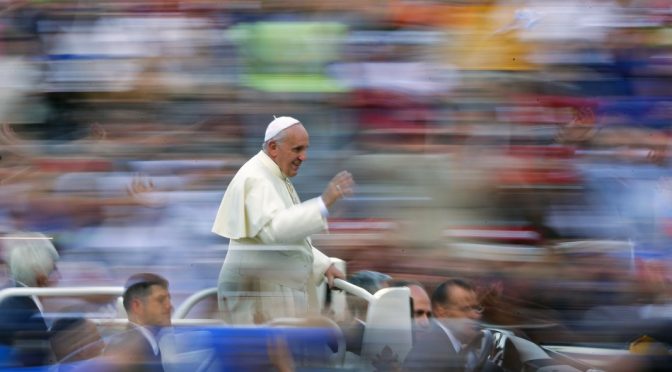 In the middle of his ongoing ITCCS trial for murder and satanic rituals, the Pope takes a leave of absence from being the Vicar of Christ.
Is he leaving for good? 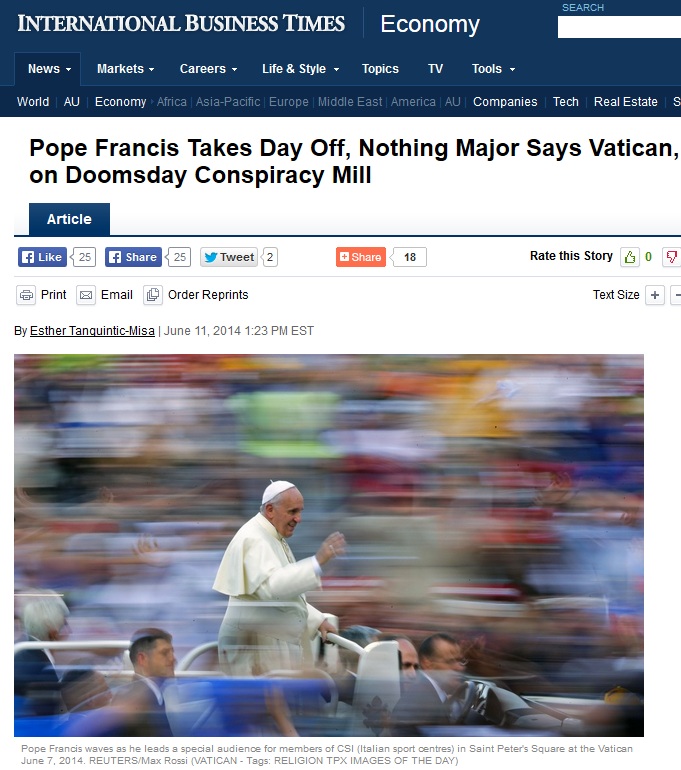 So Pope Francis isn’t a man of steel or ironman after all. Or just so we thought? The incumbent spiritual leader of the 1.2-billion strong Roman Catholic church has for the very first time filed for a leave of absence from work since taking on the post in March 2013. Vatican assured believers and skeptics alike it was nothing major, just that the pope was tired.
For a second day in a row since Monday, Pope Francis asked to cancel all his appointments so he can rest.
“Following a very historic and full weekend, Pope Francis has chosen to rest on Monday afternoon and today, Tuesday. He celebrated mass privately this morning and has cancelled audiences and meetings for the day. Therefore there will be no homily notes available today. The Holy See Press Office has assured us that the Pope’s condition is not serious. Thank you,” an e-mail from Rev. Thomas Rosica, who assists the Vatican press office with English language media, said.
Father Federico Lombardi S.J., Vatican spokesman, according to portal patheos.com, said the 77-year-old pope canceled the meetings “because of a minor indisposition.”
“Yesterday the Pope was very tired because of the prayer for peace in the Middle East.”
Lombardi stressed there is nothing to worry about on the pope’s two-day absence from work. “His life has been very intense in the past few weeks. It is totally normal for the pope to rest.”

Pope Francis balances a basketball offered by members of a basketball team as he leads a special audience for members of CSI (Italian sport centres) in Saint Peter’s Square at the Vatican June 7, 2014. REUTERS/Max Rossi (VATICAN – Tags: RELIGION SPORT BASKETBALL TPX IMAGES OF THE DAY)
For a man who only has one kidney, Pope Francis has shown remarkable resiliency, physical and otherwise, since his election in 2013.
His advisers however have tried to pull him down to a reality check every so often. The pope, they said, is very workaholic.
“We have been asking him to have holidays this year,” Religion News Service quoted Cardinal Oscar Rodriguez Maradiaga of Honduras. “Because last year he didn’t and sometimes he’s very tired.”
Maradiaga said Pope Francis has considered their advice and will take a long leave of absence from work in August.
Even as he has hoards of believers praying for his health and success, Pope Francis expectedly also has his share of skeptics who not only critique his leadership, convictions and principles, but also pray for this death so that the conspiracy theory regarding the world’s doomsday could finally happen.

Pope Francis kisses a baby as he leads a special audience for members of CSI (Italian sport centres) in Saint Peter’s Square at the Vatican June 7, 2014. REUTERS/Max Rossi (VATICAN – Tags: RELIGION)
“What worries me is that if Pope Francis suddenly collapses and dies the stupid conspiracy rumor mill will immediately kick in and we will have a whole new round of accusations about how the pope was bumped off by those sinister conservatives,” Religion News Service quoted Rev. Dwight Longenecker, a South Carolina priest and frequent critic of Francis, on his blog at Patheos.com.
Maradiaga confirmed the praying ill-wishers.
“I have even heard people say ‘We are praying for him (Francis) to die as soon as possible,'” Maradiaga said.
To report problems or to leave feedback about this article, e-mail: [email protected]
To contact the editor, e-mail: [email protected]
–
Please support us by downloading our Towards Healthcare Emancipation – Premium Edition, a fully illustrated eBook about how you can implement a low cost but extensive and decisively effective healthcare system in the comfort of your own home.
With this eBook you can easily defeat cancer, AIDS and all other parasitic diseases for good. Find out more about it here.
The proceeds from this book will be used to fund our next project, Towards Energy Emancipation.
The aim is to make the subject of free energy more understandable for the layman so that anybody could replicate and install his own power plant and be completely living off-grid.
If you haven’t done so, please like our FB page to encourage others to learn more about our work.
Thank you very much for your valuable support.

6 thoughts on “Pope Francis Takes Leave of Absence Amid Trial”