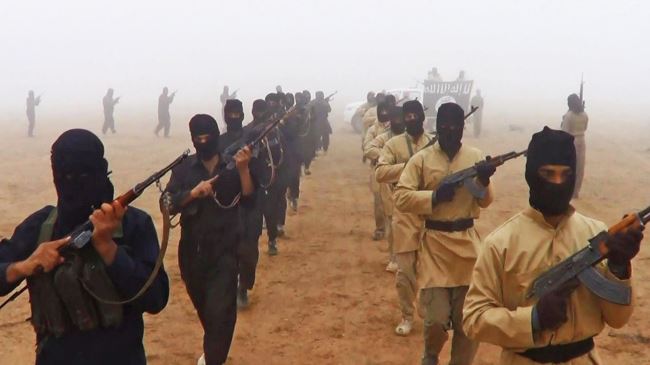 There is no doubt that the Israel government has adopted a policy of displacement against the Palestinians who have all the rights to be in what is now known as Israel, a Rothschild’s WW2 brainchild.
In its most strongest words so far, a senior Iranian cleric accuses Israel of being behind the Takfiri mayhem in Northern Iraq in order to divert the world’s attention from its apartheid policies against the Palestinians.

This file photo shows ISIL militants in Iraq.
A senior Iranian cleric says terrorist operations by Takfiri militants in Iraq are aimed at diverting public attention away from crimes committed by the Israeli regime.

“One of the main objectives of the presence of the ISIL (so-called Islamic State of Iraq and the Levant) in the region is to deflect public opinion from Israel’s crimes,” Ayatollah Mohammad Ali Movahhedi Kermani said in a sermon to worshippers at the weekly Friday Prayers in Tehran.

“The criminal ISIL has been created for further infiltration into the [Middle East] region,” the cleric added.

Movahhedi Kermani said arrogant powers are supporting the terrorist ISIL grouplet, adding that international bodies like the UN Security Council are expected to condemn the ISIL.
He reaffirmed that the crisis in Iraq is no sectarian strife and appreciated Iraqi religious scholars for their influential role in the Iraqi army’s victory against the Takfiri militants.
The ISIL militants in Iraq have launched a systematic ethnic cleansing campaign in the areas they have seized, killing people indiscriminately.
Refugees from towns held by Takfiris told the media that those officials or soldiers who refuse to pledge allegiance to their recently declared “caliphate” will be executed immediately.
Last week, the ISIL announced that it was establishing what it called a caliphate on the territories under its control in Syria and Iraq.
Over one million Iraqis have fled homes over the month as the ISIL terrorists seized Mosul, Tikrit and other cities in the northwest areas. Tikrit was recaptured later by the Iraqi army.
According to estimates by the United Nations and official Iraqi data, more than 2,400 people were killed in June.
KA/HSN/SS

Israel stepped up raids on Palestinians as part of a search operation for three Israeli settlers it claimed had disappeared on June 12, 2014. (File photo)
Iran has condemned continuation of Israel’s aggression against defenseless Palestinian population.

On Friday, Iranian Foreign Ministry Spokeswoman Marzieh Afkham called on the international community, particularly the Organization of Islamic Cooperation (OIC), to condemn the Israeli crimes and take effective action to stop them.
The Iranian official also slammed restrictions imposed by the Tel Aviv regime to block Palestinians’ access to the al-Aqsa Mosque, saying such moves indicate Israel’s fear and weakness.
Afkham underlined that resistance is the only way for the Palestinians to gain their rights.
The Iranian official said the heroic Palestinian nation has become more resistant day by day against the aggressions and war crimes of Israel, adding that Palestinians can restore their absolute rights through resistance.
The Israeli regime stepped up raids on Palestinians as part of a search operation for three Israeli settlers it claimed had disappeared on June 12.
The settlers’ bodies were discovered in a field near the village of Hilhul, north of the city of al-Khalil, in the occupied West Bank on June 30. The Tel Aviv regime attacked the besieged Gaza Strip and areas in the West Bank hours after the bodies were found.
Israel claims Palestinian resistance movement Hamas is responsible for the deaths, but Hamas rejects the allegation.
In what is believed to be a revenge attack for the three settlers, a 17-year-oil Palestinian teenager, Mohamed Abu Khdeir, was killed by Israeli settlers earlier this week.
Israeli forces also shot dead a Palestinian teenager during a raid on the Jenin refugee camp in northern West Bank on July 1.
ASH/HSN/SS
Please support us by downloading our Towards Healthcare Emancipation – Premium Edition, a fully illustrated eBook about how you can implement a low cost but extensive and decisively effective healthcare system in the comfort of your own home.
With this eBook you can easily defeat cancer, AIDS and all other parasitic diseases for good. Find out more about it here. The proceeds from this book will be used to fund our next project, Towards Energy Emancipation. The aim is to make the subject of free energy more understandable for the layman so that anybody could replicate and install his own power plant and be completely living off-grid.
If you haven’t done so, please like our FB page to encourage others to learn more about our work. Thank you very much for your valuable support.