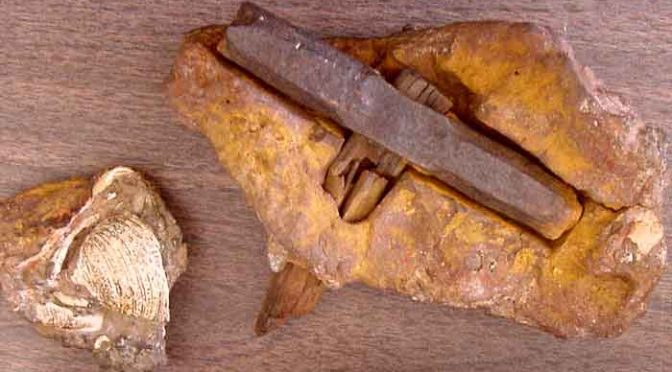 Michael Cremo’s archaeological adventure has led him to conclude that our civilization is far older than what’s in the books.
He asserted that, instead of having a planet that is 4 billion years old, there is a cyclical 4 billion period in which civilizations came and went.
Perhaps, if we will try to do it right this time, we might be the first to last longer than that.

Everything We Have Been Taught About Our Origins Is A Lie

In June 1936 Max Hahn and his wife Emma were on a walk beside a waterfall near to London, Texas, when they noticed a rock with wood protruding from its core. They decided to take the oddity home and later cracked it open with a hammer and a chisel. What they found within shocked the archaeological and scientific community. Embedded in the rock was what appeared to be some type of ancient man made hammer.

A team of archaeologists analysed and dated it. The rock encasing the hammer was dated to more than 400 million years old. The hammer itself turned out to be more than 500 million years old. Additionally, a section of the wooden handle had begun the metamorphosis into coal.  The hammer’s head, made of more than 96% iron, is far more pure than anything nature could have achieved without assistance from relatively modern smelting methods.

In 1889 near Nampa, Idaho, whilst workers were boring an artesian well, a small figurine made of baked clay was extracted from a depth of 320 feet. To reach this depth the workers had to cut through fifteen feet of basalt lava and many other strata below that. That in itself does not seem remarkable, until one considers that the very top layer of lava has been dated to at least 15 million years old!

It is currently accepted by science and geology that coal is a by-product of decaying vegetation. The vegetation becomes buried over time and is covered with sediment. That sediment eventually fossilises and becomes rock. This natural process of coal formation takes up to 400 million years to accomplish.

Anything that is found in lumps of coal or in coal seams during mining, had to have been placed or dropped into the vegetation before it was buried in sediment.

In 1944, as a ten year old boy, Newton Anderson, dropped a lump of coal in his basement and it broke in half as it hit the floor. What he discovered inside defies explanation based upon current scientific orthodoxy.

Inside the coal was a hand crafted brass alloy bell with an iron clapper and sculptured handle.

When an analysis was carried out it was discovered that the bell was made from anunusual mix of metals, different from any known modern alloy production (including copper, zinc, tin, arsenic, iodine, and selenium).

These extraordinary discoveries although bizarre, are not unique or even uncommon. There are literally thousands of them collecting dust, locked away from public scrutiny in the vaults of museums throughout the world.

There are many other unusual reported finds including the following:

The Morrisonville, Illinois Times, on June 11, 1891, reported how Mrs. S. W. Culp found a circular shaped eight-carat gold chain, about 10 inches long, embedded in a lump of coal after she broke it apart to put in her scuttle. The chain was described as “antique” and of “quaint workmanship.”

Displayed in a museum at Glen Rose, Texas, is a cast iron pot reportedly found in a large lump of coal in 1912 by a worker feeding coal into the furnace of a power plant. When he split open the coal the worker said the pot fell out, leaving its impression in the coal.

Yet another report found in the Epoch Times told of a Colorado rancher who in the 1800’s broke open a lump of coal, dug from a vein some 300 feet below the surface, and discovered a “strange-looking iron thimble.”

The Salzburg Cube is yet another ancient puzzle found by a worker named Reidl, in an Austrian foundry in 1885. Like the others, this man broke open a block of coal and found a metal cube embedded inside. Recent analysis established the object was of forged iron and obviously hand crafted. The coal it was found in was millions of years old.

The list of such items goes on and on and on.

continue reading »
Please support us by downloading our Towards Healthcare Emancipation – Premium Edition, a fully illustrated eBook about how you can implement a low cost but extensive and decisively effective healthcare system in the comfort of your own home.
With this eBook you can easily defeat cancer, AIDS and all other parasitic diseases for good. Find out more about it here. The proceeds from this book will be used to fund our next project, Towards Energy Emancipation. The aim is to make the subject of free energy more understandable for the layman so that anybody could replicate and install his own power plant and be completely living off-grid.
If you haven’t done so, please like our FB page to encourage others to learn more about our work. Thank you very much for your valuable support.