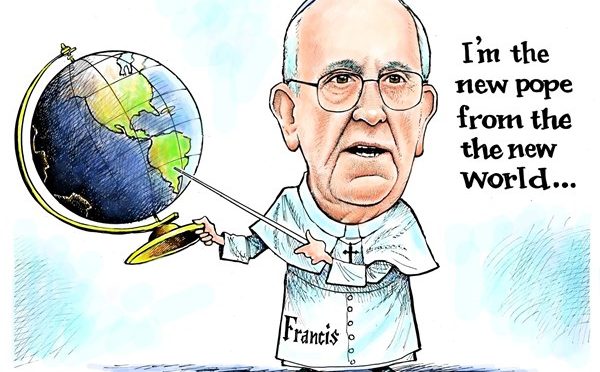 Common Law Court convened by the Tribunal has found the Pope, et al., guilty of aiding and abetting crimes against humanity…

The Judgement of the Magistrates of the Court, including the majority decision with with one dissenting opinion
Issued in Chambers Friday, 18 July, 2014
The unanimous Judgement of the Court is that the three primary defendants Jorge BERGOGLIO, Adolfo PACHON and Justin WELBY have been convicted and are guilty as charged of aiding and abetting Crimes against Humanity, including murder and human trafficking, and of personal involvement in those crimes. Their guilt has been ably presented and proven beyond any reasonable doubt by the Prosecution.
The refusal of the Defendants to respond to a lawful Summons, to deny or refute the charges against them, or to present a counter case in their own defense, compelled the Court to consider their silence as a de facto pro confesso plea in which their guilt was established by their refusal to enter a plea. Precedent has established that pro confesso – which is the refusal of a defendant to plea in a case of profound importance – provides the basis for the lawful conviction and deposing of rulers and responsible heads of church and state. (The People in Parliament v. Charles Stuart, January 3, 1649)
In this precedent, the High Court established by the Parliament of England ruled that the silence of heads of church and state when accused of crimes against their own people amounts to a confession by the accused of all of the charges made against them (January 22, 1649).
One of our colleagues offers a dissenting opinion.
While concurring with the judgement that all three Defendants are guilty as charged, the dissenting Magistrate argues that pro confesso applies only when no other means exist to prevent such rulers from perpetrating tyranny and wars of aggression on their own people and their liberties, as was so in the historical case cited.
The dissenting colleague argues that by convicting the Defendants primarily under a pro confesso precedent, their actual guilt for the crimes cited can be construed to have been established according to a legal technicality. To quote our colleague’s statement,
“The overwhelming guilt of these leaders for unspeakable crimes demands that we convict them not simply on the basis of a technicality but according to the evidence alone, so that their guilt is crystal clear to the world and to posterity.”
The Court has taken into account this dissenting opinion in formulating its final judgement.
Accordingly, it is the unanimous judgement of the Court that:
1. The Defendants Jorge BERGOGLIO, Adolfo PACHON and Justin WELBY are guilty as charged on two counts: of organizing, aiding and abetting Crimes against Humanity, including murder and human trafficking, and of personally participating in the routine and ritual rape, torture and murder of children.
2. The Defendants are sentenced to life imprisonment without the possibility of parole or pardon, and to the forfeiture of their assets, property and authority.
3. The sworn Sheriffs of the Court and their affiliated Direct Action Units, established by the Court on June 1, 2014, are ordered to immediately arrest and imprison the Defendants at facilities provided by the Court, and to seize their property and assets. The public is asked to assist the Sheriffs in this task. An open ended International Citizens’ Arrest Warrant will be issued by the Court against the convicted persons within 48 hours of this judgement.
4. The Court will produce a full public statement making it clear that the basis for its conviction of the Defendants lay entirely in the hard evidence of their guilt, and that their refusal to plea, and hence the pro confesso judgement, was a contributing factor but not the basis of the guilty sentence.
5. In addition, to emphasize that this conviction is not a limited one aimed only at the top figureheads of murderous regimes, as of September 1, 2014, the Court will establish an ongoing Permanent Inquiry to investigate and prosecute others involved in the crimes proven in this case and contained in the permanent Court record. This Inquiry shall be entitled The Permanent Commission into Child Trafficking and Ritual Sacrifice and will have the power to subpoena and arrest, and adjudicate cases before the Court. The Commission will be international in scope, have no time restriction, and will seek cooperation from governments, international agencies and police forces with the aim of prosecuting and stopping forever the trafficking, ritual torture and murder of children.
6. To protect this Commission, its witnesses, officers and evidence, the Court record from the case of The People v. Bergoglio et all will remain sealed for now, along with the identity of the witnesses and Court officers, with the exception of that permitted by the special and unanimous authorization of the Court. The Jury members who were involved in proceedings thus far are relieved of their duties and thanked for their efforts.
7. This concludes the case of The People v. Bergoglio et al.
Issued by the Judicial Council of The International Common Law Court of Justice, Brussels
19 July, 2014
Please support us by downloading our Towards Healthcare Emancipation – Premium Edition, a fully illustrated eBook about how you can implement a low cost but extensive and decisively effective healthcare system in the comfort of your own home.
With this eBook you can easily defeat cancer, AIDS and all other parasitic diseases for good. Find out more about it here. The proceeds from this book will be used to fund our next project, Towards Energy Emancipation. The aim is to make the subject of free energy more understandable for the layman so that anybody could replicate and install his own power plant and be completely living off-grid.
If you haven’t done so, please like our FB page to encourage others to learn more about our work. Thank you very much for your valuable support.