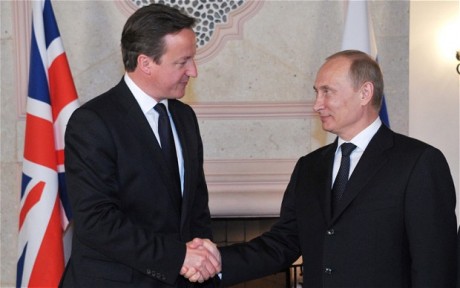 It seems Uncle Sam is running out of friends.
Germany and Saudi Arabia are joining the BRICS in dumping the US dollar. France is doing business as usual with Russia… just like the Brits.

Let’s start by stating the obvious: the revelation of continued British arms sales to Russia is both embarrassing and morally repugnant. A report by MPs has found that out of 285 export licences to Mother Russia from the UK, just 34 have been cancelled following the annexation of Crimea – despite William Hague’s pledge to end any shipments that could be used to oppress the Ukrainian people. Sure, the Foreign Office did put a block on components for air-to-air missiles and warships, but UK manufacturers were allowed to continue to supply “weapons sights, sniper rifles, bomb-proof suits, unmanned aerial vehicles, military helicopter components and cryptographic equipment”. And components for anti-aircraft guns. Everything you might need to supply a guerilla war against a sovereign state.
No doubt the Government will try to cover its back on this issue: Downing Street has already insisted that none of the remaining licences went to the Russian military and that they could include sporting rifles. But imagine how the Ukrainians will take this news. “Britain pledges solidarity with oppressed people, but sells sniper rifles to their oppressors on the sly” is not going to go down very well among the people we profess to be our friends.
The story exposes the strange double standard in Britain’s foreign policy. On the one hand, we’re idealists who want to rid the world of its tyrants; on the other hand, we want a quiet life and the chance to make a lot of money. David Cameron has made a good, blustery show of opposing Gaddafi, Bashar al-Assad and Vladimir Putin, embracing the kind of internationalist, human-rights driven agenda that would make Tony Blair proud of his ideological heir. But although military action certainly was taken in Libya (with dreadful consequences), calls for action have generally been followed by a period of silence. A period of silence in which the arms salesmen quietly move in. Recall when David Cameron flew to Egypt to congratulate the locals on their experiment in democracy … and then went on a tour of crazy dictatorships in the Gulf with eight of Britain’s top arms sellers. Around the same time, Gerald Howarth, then a British defence minister, visited a massive arms fair in Abu Dhabi where 93 British companies were selling everything from armoured riot vans to rubber bullets. And people say the British don’t make anything these days.
Arms sales might be distasteful, but they make sense in the context of a realist foreign policy that only puts British interests first. They don’t square, however, with Cameron’s stated aim of promoting liberal democracy. Perhaps the most disturbing finding of the MPs’ report was that the Government has recently dropped the following words from the arms sales criteria: “An export licence will not be issued if the arguments for doing so are outweighed … by concern that the goods might be used for internal repression”. Sorry, but you cannot supply weapons with scant regard for use and expect foreign dictatorships to take our claim to the moral upper hand at all seriously. And we certainly cannot demand that the EU take a tougher line on Putin or attack the Russian bully for encouraging civil disturbance while selling him the components for anti-aircraft guns. Britain is in danger of becoming a joke – and it is the criminals we do business with who will be laughing.
source »