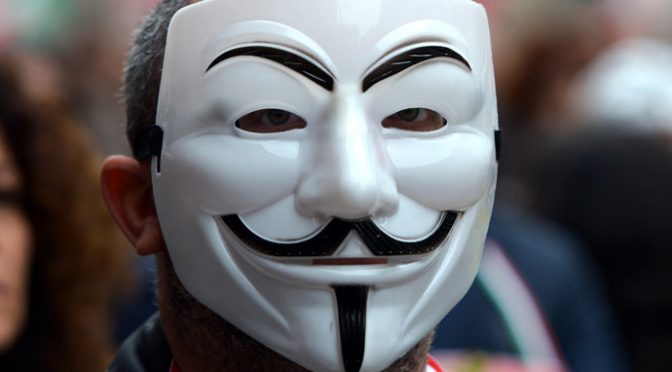 The Anonymous hacker group urged hackers to renew attacks on Israeli-based internet resources on Friday – after earlier breaches of the Defense Ministry website, Tel Aviv police, and leaks of log-in details allegedly belonging to government officials.
“We’ve been fighting Israel and their terrorist state for over four years, and we have not grown weary or tired. It has only made us stronger. Therefore, we are calling upon the Anonymous collective, and the elite hacker groups to join our crusade, and to wage cyber war against the state of Israel once more. This Friday will be a day Israel will feel fear tingling in their servers, and homes. It will be a day of solidarity and resistance,” the group’s public statement read.

The series of cyber-attacks which started on July 7 are in retaliation for Israel’s military offensive in Gaza, in which over 600 people have already lost their lives.
“As a collective ‘Anonymous’ does not hate Israel, it hates that Israel’s government is committing genocide & slaughtering unarmed people in Gaza to obtain more land at the border,” an Anonymous spokesperson told Mother Jones web portal via Twitter @YourAnonCentral.
However, the group refused to provide any details on the upcoming Friday attacks, saying, “People like surprises, right?”
Israel’s National Cyber Bureau hasn’t commented on the announcement yet.
During earlier assaults, the Anonymous spokesperson claimed the collective had taken down “thousands” of Israeli-based websites –information confirmed by the International Business Times last week. The media outlet stated that “numerous Israeli government homepages have been replaced by graphics, slogans, and auto-playing audio files.”
The “AnonGhost” group claimed responsibility for the attacks. The hacking community is, according to Anonymous representatives, an “exclusive” resource associated with the organization.
On Monday, Anonymous also leaked about 170 log-in details they say belong to Israeli officials, which the country’s authorities didn’t confirm.
In April 2013, Anonymous claimed to have attacked 100,000 websites and inflicted $3 billion in damage, but the country’s National Cyber Bureau said that Anonymous didn’t “have the skill to damage the country’s vital infrastructure.”
Two years ago, against the background of the massive Israeli operation “Pillar of Defense”, Anonymous carried out hundreds of attacks on the country’s web resources.
The Foreign Ministry database was wiped out, the data of 5,000 Israeli officials was leaked, while the Israeli deputy premier’s Facebook and Twitter accounts were hacked and filled with pro-Palestinian messages.