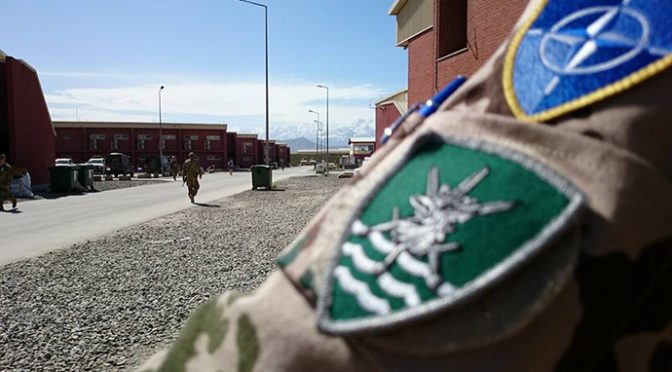 We refuse to believe that the US Military is willing to go to war with Russia, at this time. But the United States government [corporation] is, and it is in a process of laying out the final pieces to legitimize its impending incursion to the Russian territory, using proxies at the very least.
We are looking at this as an act of desperation on their part, and will never amount to something but a mere distraction to the ongoing carnage in Gaza.
Unfortunately for them, Ukrainian Prime Minister Arseny Yatseniuk has just resigned due to internal discord.

The village of Kondrashovka destroyed by Kiev troops. (File photo)
Fighter bombers attacking civilian targets in Eastern Ukraine, flying with Ukrainian Air Force markings, have been traced to air bases in Romania, Moldova and Azerbaijan, armed and some perhaps piloted by Poles and even Israelis.

Others appeared to originate from what were believed to be abandoned air fields in Azerbaijan, facilities identified in 2012 by defectors from the Azerbaijani military, as Israeli bases to be used in an attack on Iran.
This is more than an attempt to avoid detection by Russian air defense radars capable of warning pro-Russian separatists opposing the Kiev junta.
This is a gross violation of international law, of national sovereignty of the nations involved and an unauthorized use of NATO military forces, some under the direct command of General Breedlove, in a clandestine terror war against civilians, many of them Russian passport holders.
BACKGROUND
This week, two SU25 fighter bombers were shot down over the Ukraine after dropping chemical weapons and white phosphorous bombs, on a small village in a predominantly pro-Russian region of eastern Ukraine.  There are even more curious and frightening aspects of this attack.
• American news organization, MSNBC, referred to the attack, clearly a terrorist war crime, as a “task” in their reporting of the incident.
• The weapons used not only parallel current attack in Gaza but the bombs dropped duplicate the Israeli chemical attacks in other ways as well.  The weapons themselves perform identically, as though they were manufactured in the same lot, American weapons.
• The planes involved in the attack didn’t take off from Ukrainian bases but rather from Romania and were seen entering radar near an America air base.
MSNBC had been using radar-driven plane tracking websites to sell their version of the downing of flight MA17, one American military satellite imagery has debunked, not only based on the 25 mile debris field but imagery that identifies all missile operations in the region as controlled by the Kiev junta.  In fact, in a Pentagon briefing, it was suggested that junta air defense units may well have defected “and then defected back again,” explaining their bizarre hypothesis, more conspiracy theory.
NATO CHEMICAL WEAPON INVENTORIES
With reports of chemical weapon use against population centers in the Eastern Ukraine, available inventories of these illegal munitions and their locations are critical to understanding the threat.
The US maintains inventories of illegal chemical weapons around the world, some of them convenient for deployment against civilian targets in the Ukraine.  America’s current inventory of chemical weapons stored in Israel has been significantly depleted by that nation in its attacks on population centers in Gaza.
Other weapons storage centers are at Aviano Air Force Base in Italy, Camp Darby US Army Weapons Depot outside Pisa in Italy, on the British held Indian Ocean base on the Island of Diego Garcia and in forward deployment at MK Air Base in Romania.  From Stars and Stripes:

“’It’s an ideal location for us as far as capability,’ Maj. Gen. John O’Connor, commander of the 21st Theater Sustainment Command said in a recent interview with Stars and Stripes. The U.S. had already constructed 85 buildings capable of supporting roughly 1,500 personnel at Mihail Kogalniceanu – or MK Air Base – for previous missions, O’Connor said. Beginning in late December, elements of the 21st expanded the infrastructure to accommodate up to 2,000 transiting troops and 400 military personnel who run the operation.”

This facility, initially designated as a “stopover” for troops returning from Afghanistan, regularly sees huge C 17 cargo planes capable of carrying, not only weapons inventories but any American heavy weapons system.
Satellite Photo of Advanced Mig Aircraft “Stored” at US MK Air Base, Romania (courtesy of Google Earth)
More inventories of American weapons are in Azerbaijan, unloaded at the Georgian port of Poti by the USS Grapple in June of 2010 and transferred, according to sources in Georgia, by truck into Azerbaijan.
continue reading »

Published time: July 24, 2014 21:09
Edited time: July 24, 2014 22:55
[youtube=http://www.youtube.com/watch?v=OEuviNg2UCg]
Government officials in the United States said Thursday that Russia is firing artillery across the border into Ukrainian territory, but refused to provide any evidence when grilled by an Associated Press reporter.
Matthew Lee, a veteran AP journalist known for his frequent showdowns with spokespeople during US State Department briefings, raised questions about the latest claims during Thursday’s scheduled press conference.
“We have new evidence that the Russians intend to deliver heavier and more powerful rocket launchers to the separatist forces in Ukraine, and have evidence that Russia is firing artillery from within Russia to attack Ukrainian military positions,” State Department spokeswoman Marie Harf told reporters during the Thursday afternoon briefing.
When asked by Lee for any evidence, however, Harf said the State Dept. is unwilling at this time to disclose further details because doing so could expose the secret intelligence operations involved in making such claims.
“I would like to know what you’re basing this new evidence that the Russians intend to send any heavier equipment,” Lee asked.
The details, Harf responded, are “based on some intelligence information.”
“I can’t get into the sources and methods behind it,” Harf insisted to Lee’s chagrin. “I can’t tell you what the information is based on,” she said at one point during the back-and-forth.
According to Lee, previous allegations made by the Department of State have, to some, fallen short of being considered “definitive proof.”
Nevertheless, Harf responded that evidence so far has suggested that Russia has indeed played a role in the ongoing crisis in eastern Ukraine, where militia have taken up arms against the Kiev government spawning an international incident. Now one week after Malaysian Airlines Flight 17 was shot down over the region in the midst of the uproar, the State Dept. says weapons are “continuing to flow across the border.”
When Lee questioned the State Dept.’s decision to withhold any evidence to support the spokesperson’s allegations, Harf asked: “If I can’t give you the source and method, would you prefer that I not give you the information?”
“I think that it would be best for all concerned here if when you make an allegation like that you’re able to make it up with something more than just ‘because I said so,’” Lee countered. “You guys get up at the UN security council making these allegations , the secretary [of the State Dept., John Kerry] gets on the Sunday shows and makes these allegations, and then when you present your evidence to back up those allegations, it has appeared to, at least for some, fall short of definitive proof,” Lee continued.
For now, Harf said, “the rest of the world… has seen these separatists shot down a dozen planes,” and can rely on the admission of a militia leader who took credit for downing a Ukrainian plane as being among the “preponderance of evidence” available to the public.
Previously, the US ambassador to the United Nations said “it is impossible to rule out Russian technical assistance” with regards to the surface-to-air missiles blamed for taking down MH17 last Thursday. In the week since, however, the Obama administration has been unable to directly link Moscow to the event.
During a highly publicized intelligence briefing where US officials were expected to present an assessment of MH17 downing on Tuesday, government representatives were forced to admit that no evidence currently points towards any Russian involvement.
“[W]e don’t know a name, we don’t know a rank and we’re not even 100 percent sure of a nationality,” one official at the briefing told the AP this week.
Other evidence touted by the administration as supposed proof of Russia’s involvement in the crisis has turned out to be inaccurate, including images purported to show the Russian military fighting alongside an anti-Kiev militia printed by the New York Times later reported to be an “incorrect” representation.
source »

NATO Poland base may be prepared for blitz against Russia

Published time: July 24, 2014 13:39
NATO’s Europe commander advocates stockpiling a base in Poland with enough weapons, ammunition and other supplies to support a rapid deployment of thousands of troops against Russia, British media reported.
General Philip Breedlove’s idea would be presented to members of the alliance at the upcoming NATO summit in Wales in September, according to The Times.
The general told a briefing in Naples this week that NATO needed “pre-positioned supplies, pre-positioned capabilities and a basing area ready to rapidly accept follow-on forces.” Several locations for the future stockpile are planned, with the Multinational Corps Northeast, a base in Szczecin near the Polish-German border being the leading contender.
“It would be a 24/7 fully functioning headquarters that forces could quickly fall in on to respond rapidly when needed,” the British newspaper cites a source familiar with the expected proposition as saying.
Breedlove has been advocating a build-up of NATO assets in Europe, particularly Eastern Europe, in the wake of the Ukrainian crisis in the secession of Ukraine’s Crimea to Russia. The alliance has already strengthened its presence in the Baltic Sea and the Black Sea and deployed additional military aircraft in Eastern Europe. It said the moves were needed to boost the confidence of eastern NATO members in the alliance’s ability to protect them from Russian aggression.

The stockpiling of supplies is just a step short of a permanent massive deployment of foreign NATO troops in Poland. The alliance says it is needed for a rapid response to a Russian incursion, although Russian generals would probably view this as a possible preparation for a blitzkrieg attack on Russia.
Moscow considers the build-up of NATO troops in Europe as part of a hostile policy aimed at placing the alliance’s military resources closer to its borders. Russia’s current military doctrine allows the use of all weapons in its possession, including tactical nuclear weapons, in response to a conventional force attack on Russia.
source »
Please support us by downloading our Towards Healthcare Emancipation – Premium Edition, a fully illustrated eBook about how you can implement a low cost but extensive and decisively effective healthcare system in the comfort of your own home.
With this eBook you can easily defeat cancer, AIDS and all other parasitic diseases for good. Find out more about it here. The proceeds from this book will be used to fund our next project, Towards Energy Emancipation. The aim is to make the subject of free energy more understandable for the layman so that anybody could replicate and install his own power plant and be completely living off-grid.
If you haven’t done so, please like our FB page to encourage others to learn more about our work. Thank you very much for your valuable support.