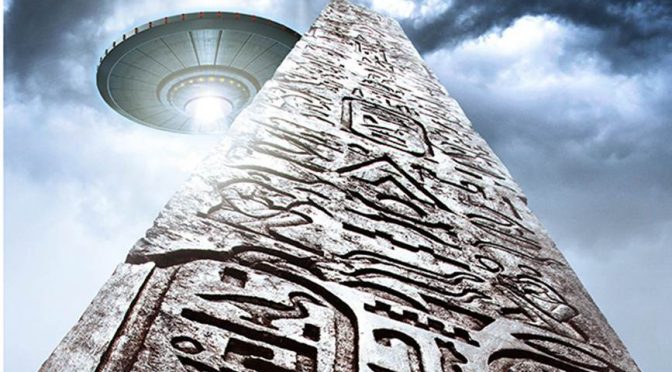 Finally, a local TV network has begun airing Ancient Aliens which would hopefully end the tyranny of religion against my people. 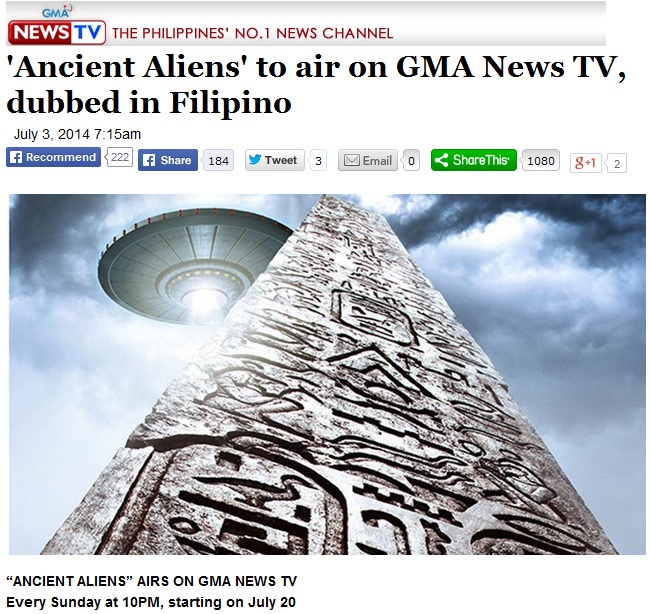 This July, GMA News TV airs the series that explores the controversial theory that claims extraterrestrials have visited Earth for millions of years – “Ancient Aliens”.
First aired on the History Channel, “Ancient Aliens” examines 75 million years of the most credible alien evidence here on Earth – from the age of the dinosaurs, to ancient Egypt, to the skies over the western desert in the present day US. Ancient cave drawings of strange creatures, an asphalt-like substance in an Egyptian pyramid made from the remains of unidentified creatures, continued mass sightings in the USA – these are just a few of the strange stories that will be investigated.
If ancient aliens visited Earth, who were they, and where did they come from? The first episode of this series delves into these questions, examining possible historic evidence and beliefs from around the world. The Dogon people possess knowledge of a galaxy they claim was given to them by a star god named Amma. The Hopi and Zuni people celebrate Kachinas, gods from the sky, whose headdresses and costumes appear to resemble modern helmets and protective clothing. Halfway around the world, Chinese legends tell of the Han leader, Huangdi, arriving on Earth on a flying, yellow dragon. Was this dragon more likely a spacecraft? Ancient astronaut theorists believe that these are far from chance encounters and that extraterrestrials not only interacted with us, but changed the course of human history.
Narrated and dubbed in Filipino, “Ancient Aliens” airs every Sunday at 10PM, starting on July 20, on GMA News TV Channel 11.
source »
Please support us by downloading our Towards Healthcare Emancipation – Premium Edition, a fully illustrated eBook about how you can implement a low cost but extensive and decisively effective healthcare system in the comfort of your own home.
With this eBook you can easily defeat cancer, AIDS and all other parasitic diseases for good. Find out more about it here. The proceeds from this book will be used to fund our next project, Towards Energy Emancipation. The aim is to make the subject of free energy more understandable for the layman so that anybody could replicate and install his own power plant and be completely living off-grid.
If you haven’t done so, please like our FB page to encourage others to learn more about our work. Thank you very much for your valuable support.