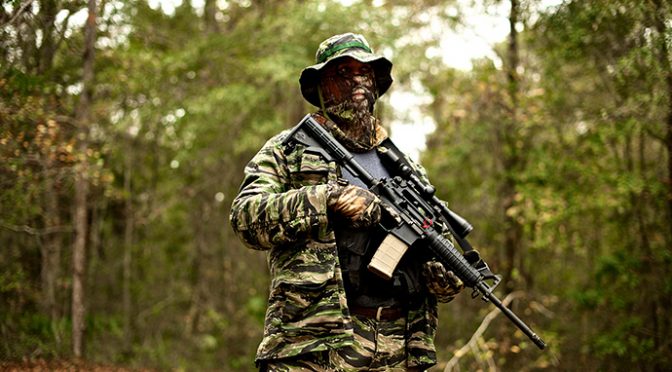 It’s official. Independent minded citizens, especially those who are advocating for the freedom of the individual, are now classified as the number one threat to the Corporation.
For that reason, we occupy more than 40% of the demographics as shown on the red portion of the pie chart below. 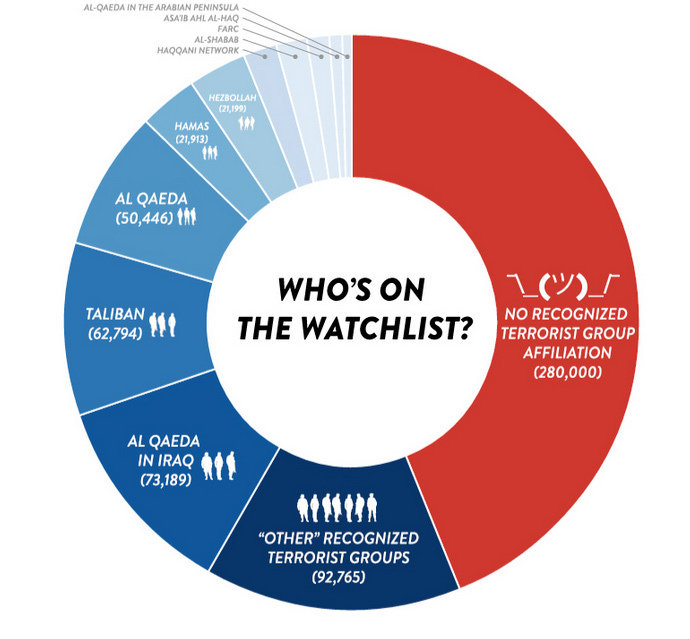 According to the journalists’ report, more than 40 percent of the 680,000 individuals listed in the US Terrorist Screening Database shared with local police agencies, contractors and governments around the globe — or around 280,000 people — have “no recognized terrorist group affiliation.”
Additionally, the documents reveal that the number of people barred from flying in the US — entrees on the infamous “no-fly list” — has increased by 10-times since President Barack Obama entered the White House in 2009 to a total of around 47,000.
“You might as well have a blue wand and just pretend there’s magic in it, because that’s what we’re doing with this—pretending that it works,” former FBI agent Michael German, now a fellow at New York University’s Brennan Center for Justice, told The Intercept. “These agencies see terrorism as a winning card for them. They get more resources. They know that they can wave that card around and the American public will be very afraid and Congress and the courts will allow them to get away with whatever they’re doing under the national security umbrella.”
Tuesday’s Intercept story contains a trove of previously unreported details concerning the administering of federal watchlists and its massive expansion under the Obama administration. As of 2013, the website reported, the main terrorism database operated by the US contains more than 860,000 biometric files on 144,000 people, who are but a sliver of the 680,000 individuals on the lists.
“When US officials refer to ‘the watchlist,’ they typically mean the TSDB [Terrorist Screening Database], an unclassified pool of information shared across the intelligence community and the military, as well as local law enforcement, foreign governments and private contractors,” The Intercept reported. Furthermore, watchlisting guidelines published by The Intercept last month revealed that officials don’t need ‘concrete facts’ or ‘irrefutable evidence’ to place someone on the list, but rather “only a vague and elastic standard of ‘reasonable suspicion.’”
continue reading »

Published time: August 04, 2014 17:32
Edited time: August 05, 2014 14:00
The sovereign citizen movement is considered the top threat for domestic terrorism, according to a survey of state, local, and tribal law enforcement agencies.
Islamist extremists and militia/patriot groups round out the top three threats to communities in the United States considered most serious by 364 officers of 175 state, local, and tribal law enforcement entities, according to a survey conducted by the National Consortium for the Study of Terrorism and Responses to Terrorism (START).
The survey – “Understanding Law Enforcement Intelligence Processes” – found that “52 percent of respondents agreed and 34 percent strongly agreed that sovereign citizens were a serious terrorist threat” as opposed to 39 percent of respondents who agreed and 28 percent who strongly agreed that Islamic extremists were the most serious threat.
A previous sample on terror threats taken in 2006-2007 found that sovereign citizens were the eighth-most serious threat to non-federal law enforcement. Islamic extremists led that survey’s threat index.
The latest survey found that while sovereign citizens as a whole have moved into the top position overall, the threat posed by many individual groups that are considered part of the broad movement has decreased since the previous survey.
“[A]lthough estimates about some groups were a serious terrorist threat increased comparing the two time periods, (e.g., Left-Wing Revolutionaries; Extreme Anti-Abortion Extremists), the concern about whether most groups were a serious terrorist threat actually declined for most groups (e.g., the KKK; Christian Identity; Neo-Nazis; Racist Skinheads; Extremist Environmentalists; Extreme Animal Rights Extremists).”
The decline of some of these individual groups surprised researchers.
“The change is interesting as there was significant concern about the resurgence of the radical far right (as evidenced by the 2006 – 07 survey, as well as additional concerns raised after the 2008 election of President Barack Obama), but it appears as though law enforcement is, at present, less concerned about these groups,” they wrote.
As for the generalized term, “sovereign citizen movement,” the researchers say that while it is often associated with right-wing groups, the ideology of sovereign citizens does not always fit with the association.
“Although most organizations group Sovereign Citizens with other right wing groups, they are quite unique. Sovereigns do not specifically share the ‘supremacist’ views of the Klan, etc. Their focus is not on individuals (e.g., minorities, Jews, etc.) rather their focus is on government dysfunction and abuse of authority. Their anti-government ideology is arguably more akin to left wing anarchists than right wing Klansmen.”
The survey found that cyberterrorism is perceived by officers as the most likely terrorism-related crime. Conventional Explosive Devices was considered second most-likely.
continue reading »