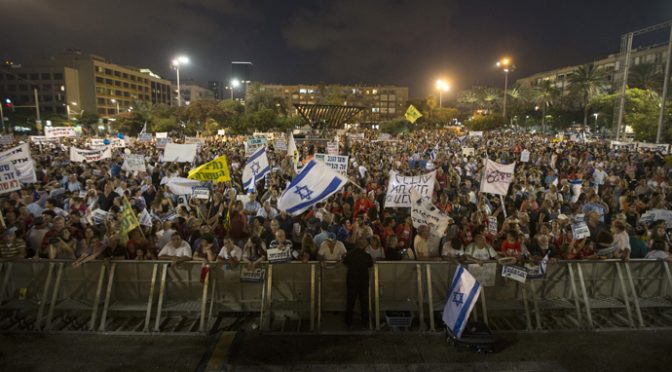 The real nightmare is what Israel is doing in such a place it ain’t suppose to be. Not with Ebola.

Noam Chomsky: The Nightmare in Gaza

“There is no place in the prison of Gaza safe from Israeli sadism.”
Amid all the horrors unfolding in the latest Israeli offensive in Gaza, Israel’s goal is simple: quiet-for-quiet, a return to the norm.

For the West Bank, the norm is that Israel continues its illegal construction of settlements and infrastructure so that it can integrate into Israel whatever might be of value, meanwhile consigning Palestinians to unviable cantons and subjecting them to repression and violence.

For Gaza, the norm is a miserable existence under a cruel and destructive siege that Israel administers to permit bare survival but nothing more.

The latest Israeli rampage was set off by the brutal murder of three Israeli boys from a settler community in the occupied West Bank. A month before, two Palestinian boys were shot dead in the West Bank city of Ramallah. That elicited little attention, which is understandable, since it is routine.

“The institutionalized disregard for Palestinian life in the West helps explain not only why Palestinians resort to violence,” Middle East analyst Mouin Rabbani reports, “but also Israel’s latest assault on the Gaza Strip.”

In an interview, human rights lawyer Raji Sourani, who has remained in Gaza through years of Israeli brutality and terror, said, “The most common sentence I heard when people began to talk about cease-fire: Everybody says it’s better for all of us to die and not go back to the situation we used to have before this war. We don’t want that again. We have no dignity, no pride; we are just soft targets, and we are very cheap. Either this situation really improves or it is better to just die. I am talking about intellectuals, academics, ordinary people: Everybody is saying that.”

In January 2006, Palestinians committed a major crime: They voted the wrong way in a carefully monitored free election, handing control of Parliament to Hamas.

The media constantly intone that Hamas is dedicated to the destruction of Israel. In reality, Hamas leaders have repeatedly made it clear that Hamas would accept a two-state settlement in accord with the international consensus that has been blocked by the U.S. and Israel for 40 years.

In contrast, Israel is dedicated to the destruction of Palestine, apart from some occasional meaningless words, and is implementing that commitment.

The crime of the Palestinians in January 2006 was punished at once. The U.S. and Israel, with Europe shamefully trailing behind, imposed harsh sanctions on the errant population and Israel stepped up its violence.

The U.S. and Israel quickly initiated plans for a military coup to overthrow the elected government. When Hamas had the effrontery to foil the plans, the Israeli assaults and the siege became far more severe.

There should be no need to review again the dismal record since. The relentless siege and savage attacks are punctuated by episodes of “mowing the lawn,” to borrow Israel’s cheery expression for its periodic exercises in shooting fish in a pond as part of what it calls a “war of defense.”

Once the lawn is mowed and the desperate population seeks to rebuild somehow from the devastation and the murders, there is a cease-fire agreement. The most recent cease-fire was established after Israel’s October 2012 assault, called Operation Pillar of Defense .

Though Israel maintained its siege, Hamas observed the cease-fire, as Israel concedes. Matters changed in April of this year when Fatah and Hamas forged a unity agreement that established a new government of technocrats unaffiliated with either party.

Israel was naturally furious, all the more so when even the Obama administration joined the West in signaling approval. The unity agreement not only undercuts Israel’s claim that it cannot negotiate with a divided Palestine but also threatens the long-term goal of dividing Gaza from the West Bank and pursuing its destructive policies in both regions.

‘Finish the job!’ Thousands of Israelis rally in support of Gaza offensive (PHOTOS) 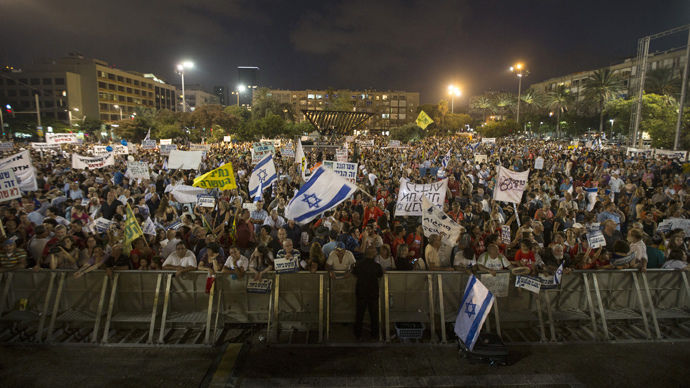 Thousands of people in Tel Aviv rallied to show support for the IDF’s military campaign in Gaza, urging the government forces to stop Hamas rocket attacks on Israel once and for all.

An estimated 10,000 Israelis gathered in Rabin Square for first major demonstration since Operation Protective Edge began on July 8, officially to protect Israeli civilians from the barrage of rockets launched from the militant organization on the Gaza strip. People hold signs during a rally in Tel Aviv’s Rabin Square, to show solidarity with residents of Israel’s southern communities, who have been targeted by Palestinian rockets and mortar salvoes, August 14, 2014. The sign reads “Conquer Gaza now”. (Reuters / Baz Ratner)

“I have full confidence in the government and in the army, but at the same time I ask as mayor of Sderot that they put an end to this situation once and for all,” AFP reports.

“Finish the job!” he said. “This is a universal principle. We want to live in peace,” he added. A girl holds a sign during a rally in Tel Aviv’s Rabin Square, to show solidarity with residents of Israel’s southern communities, who have been targeted by Palestinian rockets and mortar salvoes, August 14, 2014. (Reuters / Baz Ratner)

“Occupy Gaza now!” placards were seen in the crowd, as the IDF claims Hamas has launched more than 3,500 rockets since beginning of the Israeli campaign, killing three civilians.

He thanked the military for launching the offensive.

“I hope they will transform the military victory into a political victory that will bring quiet to the whole country,” he said. A man holds a sign during a rally in Tel Aviv’s Rabin Square, to show solidarity with residents of Israel’s southern communities, who have been targeted by Palestinian rockets and mortar salvoes, August 14, 2014. (Reuters / Baz Ratner)

To root-out Hamas’ smuggling tunnels and stop rocket launches on Israel, the IDF has been assaulting Gaza from land, sea and air for over a month, leaving at least 1,962 Palestinians dead – most of them civilians, including women and children – and sacrificing the lives of 64 Israeli soldiers in battles with Hamas. Israelis gather during a protest calling on the government and the army to end Palestinian rocket attacks from Gaza once and for all, in the Mediterranean city of Tel Aviv on August 14, 2014. Hebrew writting on placard reads “an entire generation demands clonex (anti-anxiety medication).” (AFP Photo / Gali Tibbon) Please support us by downloading our Towards Healthcare Emancipation – Premium Edition, a fully illustrated eBook about how you can implement a low cost but extensive and decisively effective healthcare system in the comfort of your own home.

With this eBook you can easily defeat cancer, AIDS and all other parasitic diseases for good. Find out more about it here. The proceeds from this book will be used to fund our next project, Towards Energy Emancipation. The aim is to make the subject of free energy more understandable for the layman so that anybody could replicate and install his own power plant and be completely living off-grid.

If you haven’t done so, please like our FB page to encourage others to learn more about our work. Thank you very much for your valuable support.