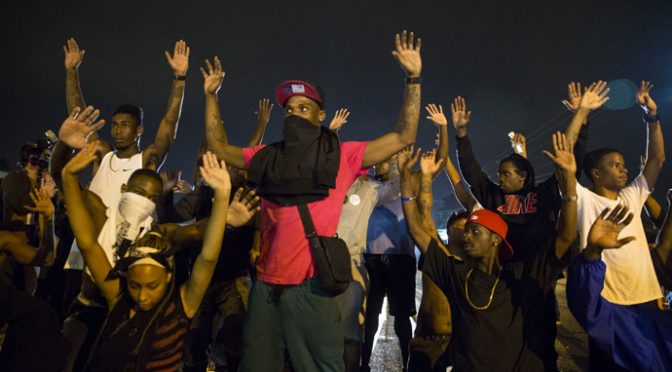 So there it is. The real intent to the so-called Ferguson shooting is to be able to declare a ‘state of emergency,’ which to our experience is equivalent to martial law.

There is also, in this case, another byproduct which the Establishment perennially want, i.e.  to reignite the division between black and white Americans.
What if the death of Michael Brown was staged just like the deaths of three Israelis that was used as a pretext in attacking Gaza one more time?
What if the riots related or attached to the Mike protest is another false flag operation that will be used to declare martial law nationwide?

By Paul Joseph Watson
Global Research, August 14, 2014
This past Sunday, police cordoned off an area in the St. Louis suburb of Ferguson, Mo., and stood idly by allowing people to destroy commercial property and loot retail establishments, an eyewitness told Infowars.
The witness, whom Infowars reporter Joe Biggs interviewed briefly, said he had been out on Sunday when most of the looting happened and that police let people have a free-for-all after establishing blockades around the community.
“The thing about it is they allowed everybody to loot Sunday,” the Ferguson resident told Biggs.

“Basically they just want to wage war on the people, just so they can put martial law down.”

“That’s what I heard,” Biggs corroborated. “One of the guys we spoke to earlier said the cops were blocking an area and literally letting the masses drive by and go into the shopping centers.”
[youtube https://www.youtube.com/watch?v=BIr6F7beG3U]
“They surrounded the entire community at each end and let everybody loot and do everything they wanted to do,” the man continued.
Riot police have been out in full force in Ferguson after the police shooting of 18-year-old Michael Brown, who witnesses say had his hands up when police shot him.
The man asserted that police were purposely allowing the looting and agitating protesters “so they can put martial law down.”

“When it comes down to it, this is all deployed basically to make sure that everybody begins a war with the police, even though they’re rioting for a reason, for a cause, but of course they’re gonna try to use militia… The facade version of America just sees people running around hectic and just wanting to destroy their community and that’s not what’s going on right now.
“Basically they just want to wage war on the people, just so they can put martial law down.”

Missouri governor has declared state of emergency and set curfew in Ferguson suburb where a black teenager Michael Brown was shot dead by police last weekend, sparking week-long mass protests.
TIMELINE: Militarized US police face-off with Ferguson protesters
“The eyes of the world are watching. This is the test of whether a community, this community, any community, can break the cycle of fear, distrust and violence, and replace them with peace, strength and, ultimately, justice,” Governor Jay Nixon said in his speech at a church near Ferguson.
The curfew will be imposed from midnight to 5 am local time, according to Captain Ronald Johnson of the Missouri State Highway Patrol, who also spoke at the press conference, following Governor Jay Nixon.
As Governor Nixon told the people of Ferguson to sleep during the curfew, he was interrupted by a protester who yelled out “Sleep is not an option!” and “We want justice!”
Johnson also added that no tear gas or harsh tactics will be used to enforce the curfew, acknowledging that tear gas had been used against protesters early Saturday morning, but not on his orders.
“You saw people sitting in the street and they had the chance to get up,” he said. “And that’s how it’s going to continue.”
Johnson added that three officers were injured in clashes on Friday as some were trapped by the rioters in a parking lot. But no use of force was ordered by him, the captain said. “What we’re doing now is not who we are,” Johnson said amid shouts.
The Governor meanwhile said that the curfew was necessary in order to separate peaceful demonstrators from violent looters, and that he will not allow a few provocateurs to endanger the community adding that “calm” is necessary to serve justice.
Amnesty International however disagrees with the curfew being a viable option to ease tensions as it is “clear that the community doesn’t feel heard.”
“It’s hard to build trust when the governor won’t meet with community members and restricts their movements with a curfew,” said Margaret Huang, deputy executive director of Amnesty International USA, as cited by USA Today. “The people of Ferguson should not have their rights further restricted.”
On Friday, following peaceful demonstrations during the day, a group of people stayed in the streets after midnight, provoking police and throwing bottles and other objects at the officers. Some individuals also stormed and looted local stores. A masked man carries items out of a liquor store that had been broken into during on-going demonstrations to protest against the shooting of Michael Brown, in Ferguson, Missouri, August 16, 2014. (Reuters/Lucas Jackson)

Looting mars renewed protests in Ferguson (PHOTOS)
The protests in St. Louis rural community continue despite the release of the name of the police officer, Darren Wilson, who fatally shot unarmed black teenager Michael Brown last Saturday. The tragedy has triggered violence in the town and vigils by thousands of people across the United States.
The governor assured people that there are dozens of FBI agents on the ground investigating the teenager’s murder. He also said that US Department of Justice is increasing its efforts in the shooting probe.
source »
Please support us by downloading our Towards Healthcare Emancipation – Premium Edition, a fully illustrated eBook about how you can implement a low cost but extensive and decisively effective healthcare system in the comfort of your own home.
With this eBook you can easily defeat cancer, AIDS and all other parasitic diseases for good. Find out more about it here. The proceeds from this book will be used to fund our next project, Towards Energy Emancipation. The aim is to make the subject of free energy more understandable for the layman so that anybody could replicate and install his own power plant and be completely living off-grid.
If you haven’t done so, please like our FB page to encourage others to learn more about our work. Thank you very much for your valuable support.