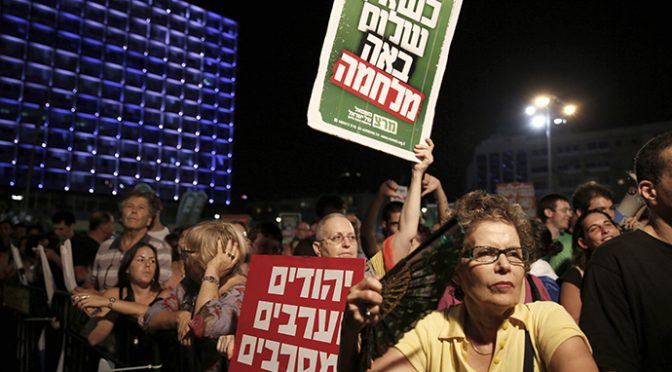 Just a few days ago we’ve seen people taking actions against Israel’s unwarranted aggression.
But we need persistent and smarter moves than these. We don’t demand changes from the likes of Bibi Netanyahu. We don’t ask them to step down.
We must take them down by ourselves.

‘Jews and Arabs refuse to be enemies’: Thousands call for peace at Tel Aviv rally (PHOTOS) 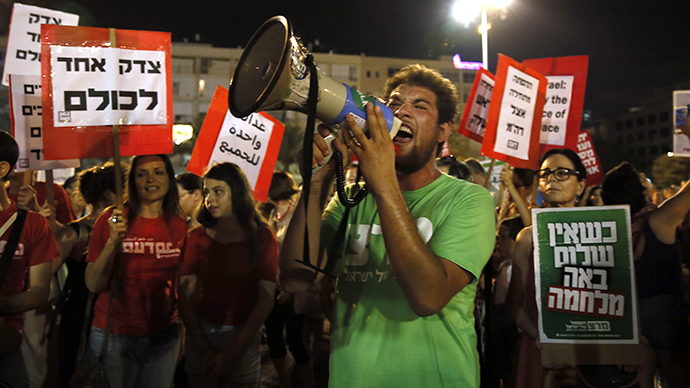 Thousands of people gathered in Tel Aviv’s Rabin Square over the weekend to encourage an end to hostilities through peace negotiations between Israeli Prime Minister Binyamin Netanyahu and the Palestinian unity government.
The protest’s organizers said that the turnout Saturday night was as high as 10,000 people, while Israeli media said that just “thousands” were involved in the protest, the Jerusalem Post reported.
Participants rallied under the slogan: “Changing direction: toward peace, away from war.”
Several protesters were chanting, “Bibi go home,” according to JPost.
The left-wing Meretz party’s leader, member of the Knesset Zehava Gal-On, called for the resignation of Netanyahu, saying he had failed to ensure peace in the south despite having the capacity and authority to act over the course of the past five years. Israeli author David Grossman speaks as thousands of Israelis protest during a left-wing peace rally in the coastal city of Tel Aviv calling for the Israeli government to negotiate with the Palestinian Authority on August 16, 2014. (AFP Photo / Gali Tibbon)

“You could have achieved the framework you are willing to accept now without paying the price of 64 dead soldiers and the deaths of civilians,” she told the crowd.
Other protesters marched under signs stating, “Jews and Arabs refuse to be enemies,” and “When there is no peace, war comes,” according to the JPost. In addition to Meretz, Hadash, Peace Now and other left-wing organizations participated in the rally. A demonstrator holds up placards reading in Hebrew: “When there is no peace war comes” (top) and “Jews and Arabs refuse to be enemies” (bottom) as thousands of Israelis protest during a left-wing peace rally in the coastal city of Tel Aviv calling for the Israeli government to negotiate with the Palestinian Authority on August 16, 2014. (AFP Photo / Gali Tibbon)

The protest had originally been scheduled for the previous week. However, it was postponed after its permit was revoked by the Home Front Command and the police at a point when authorities were trying to prevent large-scale gatherings while missiles were still being fired and there was still a threat of Hamas rockets falling on Tel Aviv.
In contravention of the ban, 500 people still materialized at the time for which it was originally scheduled.
Among the more high-profile marchers on Saturday night was author David Grossman, who said that a military solution was not possible in the Israeli-Palestinian dispute. “There is still a critical mass who want peace,” he said. Demonstrators hold a placard reading in Hebrew: “Agreement with Abbas not with Hamas” as thousands of Israelis protest during a left-wing peace rally in the coastal city of Tel Aviv calling for the Israeli government to negotiate with the Palestinian Authority on August 16, 2014. (AFP Photo / Gali Tibbon)

“Certain phenomena and processes that have become apparent lately might transform Israel into an extremist, militant sect, xenophobic, isolated and ostracized,” Grossman added.
Meretz activist Ofer Prag told JPost that he had attended to make sure the left was given a voice.
“We could have gone down the political path before this war started and averted 64 Israeli deaths and nearly 2,000 Palestinian ones,” he said.
On August 14, an estimated 10,000 also rallied in Tel Aviv to show support for the IDF’s military campaign in Gaza, urging the government forces to stop Hamas rocket attacks on Israel once and for all.
The expiration of a five-day ceasefire loomed on Monday night.
More than 2,000 civilians and military personnel have been killed since the conflict began five weeks ago.
source »

Picketers gathered at the Port of Oakland in California this weekend to prevent an Israeli shipping vessel from unloading its cargo in protest over the situation in Gaza, where the death toll has topped 2,000.
In what was a community-wide effort, dock workers that showed up for the evening shift on Sunday did not disturb the integrity of the picket line, which was there in anticipation of the ship, operated by Zim Shipping Services Ltd.
Because the line wasn’t crossed, no unloading could take place. Organizer Lara Kiswani confirmed that “they’re honoring our community picket and they haven’t been crossing.”
A Twitter campaign, called #BlockTheBoat, promoted the event, which started as a march earlier on Saturday with slogans such as “Gaza will be free” or “Boycott. Divest. Sanction. End Israeli Apartheid.” Drawing supporters, it resulted in groups of 20 to 50 protesters gathering at different entrances to the docks.
The previous day it was only a coalition of some 70 organizations working in the San Francisco Bay Area, before the march became a picket.
One organizer, Sharif Zakout, told the Guardian the group “didn’t expect to be out here today until an hour before the ILWU workers were coming to work.”
The ship’s route was monitored by activists online, so the crowd knew to come back at 5:10pm to continue picketing on Sunday. The event lasted until 8pm and proceeded calmly, with no police involvement, although officers stood by and kept watch.
Kiswani doesn’t look like she wishes to give up that easily or restrict the action to just this separate event.
“They may unload it in the morning, they may not,” she told the newspaper. “Our intention is to really build a movement here … our goal in the long run is for the workers themselves to refuse to unload that ship, stand with us, and take a position against Israeli apartheid.”
continue reading »
Please support us by downloading our Towards Healthcare Emancipation – Premium Edition, a fully illustrated eBook about how you can implement a low cost but extensive and decisively effective healthcare system in the comfort of your own home.
With this eBook you can easily defeat cancer, AIDS and all other parasitic diseases for good. Find out more about it here. The proceeds from this book will be used to fund our next project, Towards Energy Emancipation. The aim is to make the subject of free energy more understandable for the layman so that anybody could replicate and install his own power plant and be completely living off-grid.
If you haven’t done so, please like our FB page to encourage others to learn more about our work. Thank you very much for your valuable support.

Hundreds of protesters gathered outside the CNN center in Atlanta on Monday to march in memory of unarmed Missouri teenager Michael Brown who was gunned down by a police officer, many in protest of CNN’s controversial coverage of the incident.
Demonstrators who had been urged to attend dressed in their “Sunday’s best” marched under the slogan: “How good must we look to be considered innocent?” and used the #ItsBiggerThanYou hashtag.
The protest was staged in response to CNN’s Ferguson protests coverage, which had a strong emphasis on past actions by Brown which may have incriminated him. According to the Atlanta Journal Constitution, as many as 1,000 protesters marched.
Militarized US police face-off with Ferguson protesters LIVE UPDATES